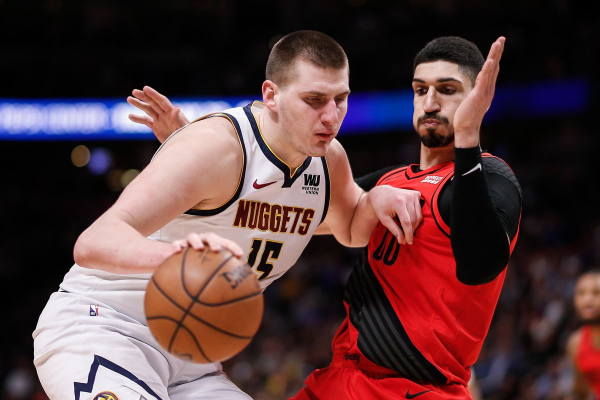 Nikola Jokic and the DenverNuggets are in Portland to take on Damian Lillard, C.J. McCollum and the Trail Blazers tonight at 10:30 EST on ESPN. There are currently no real injury concerns besides the ongoing shoulder injury with Enes Kanter. Kanter is clearly injured, but I would push back on the concept that Kanter’s injury has really impacted this series. The series has had a few twists and turns with the slight changes in alignment and the 4 overtime game.

The Denver Nuggets have been the better team in this series and I think they are the better team, as they are up 3-2 in the series. Not to mention the 4 overtime game on the road that they could’ve won several times and then bouncing back from that loss with a win in Portland. The biggest difference in this series so far has been Damian Lillard vs. Nikola Jokic. There are a few reasons for this and this is why I eventually picked the Nuggets to win this series. The Nuggets have a few good guard defenders. Gary Harris gets the assignment of Lillard more than anyone else because he is the best of the bunch. Jamal Murray is pretty similar to Damian Lillard on both sides of the ball but just less polished.

Murray isn’t near the defender that Harris is, but he isn’t constantly abused by opposing guards. The other player that had seen a lot of Lillard was Torrey Craig, but we have seen Craig lose a lot of minutes in the last few games, likely due to his nose injury sustained in game 2. Once the mask goes on, we often see players become slightly uncomfortable and less aggressive. Craig was ONLY on the court to provide more defense for the duo of Lillard and McCollum, but the injury has set him back a bit on both sides of the ball. Craig has never been a decent offensive weapon, so the slight decrease in his game has made Will Barton the better option. Barton is usually a worse defender than Craig, but a much better offensive player. Since Craig’s defense isn’t what it normally is, Coach Malone has transitioned back to Barton seeing more run.

Nikola Jokic has been relatively unstoppable in the series and that is why the Nuggets are the better team in this matchup. With the defense of GaryHarris hounding him all over the court, Lillard has struggled to really explode at any point in the series. Jokic has an elite matchup with separated shoulder Enes Kanter, who has been regarded as one of the worst big man defenders in the league for years.

The biggest flaw in Kanter’s game is the lack of mobility and his play in the screen game. This has been exploited by Jamal Murray and Nikola Jokic, an elite scorer and elite passing combination that should be one of the best PnR duos in the NBA for years to come. We didn’t see Kanter get exploited by OKC because Russ can’t hit the mid-range floaters and step back jumpers at a high enough clip to expose this flaw. In this series, I thought all along that the Blazers should play more Zach Collins, who did play more in the last game. The Blazers attempted to guard Jokic with a more athletic Aminu, but that just led to Paul Millsap having a fantastic game. Not to mention that Jokic was still effective.

The Portland Trail Blazers are -3.5 point favorites in this spot and I think that line is too kind to the Blazers. The Nuggets are the better team in this matchup, if not overall and I want Denver here. I think that there are only two options for Portland in this game. One is to play way more Zach Collins, which they are scared to do because that would mean losing Kanter’s offense. The other option is hope Damian Lillard and CJ McCollum shoot better. Can the second one come to fruition? Sure. But I think the performance of those two is due to the Denver defense and not because they are playing poorly.