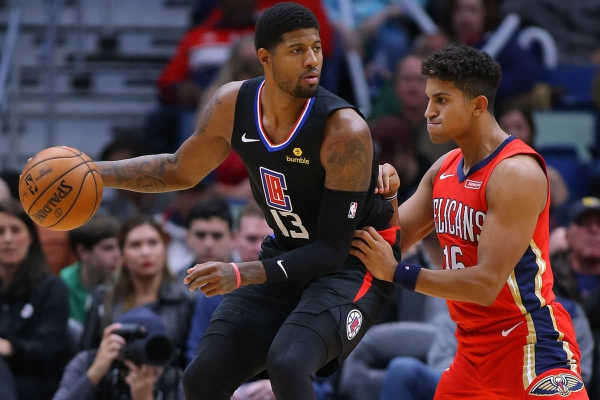 In what is likely the most-anticipated matchup on Christmas Day, the two Los Angeles teams will meet for the first time since opening night. The Lakers (24-6) have had a phenomenal season but are in the midst of a season-high three-game losing streak. They’ll host the Clippers (22-10), a team that has also impressed but has lost three of its last five games.

Here is a preview for Clippers-Lakers on Christmas Day, along with odds and a free pick.

The Clippers are allowing 108.6 points per game, 14th in the NBA. They are, however, holding opponents to 43.3 percent shooting from the field, fourth in the league. With an average of eight steals a game and 5.1 blocks as well, the well-rounded Clippers are one of the more balanced teams in the league.

Meanwhile, the Lakers are a team that plays at a slower pace than their roommates in the Staples Center and don’t score as many points, ranking 10th with 112.3 points. However, they’re incredibly efficient, hitting their shots at a league-best 48.4 percent clip. The Lakers are only making 10.9 threes per game, which is in the bottom third of the league, but they rank top 10 in assists.

Under new head coach Frank Vogel, the Lakers have become an elite defensive team. They are holding opponents to 104.9 points per game, the third-lowest average in the league. The Lakers are also limiting teams to 11.2 threes per game, the seventh fewest in the NBA, on only 33.8 percent shooting.

Ranking third with 8.5 steals plus a league-high 7.1 blocks per game, the Lakers can stifle even the best offenses while still scoring on the other end.

Superstar duos will dominate the conversation for Wednesday’s SoCal showdown. The Clippers have a pair of superstars in Kawhi Leonard and Paul George. In his first season in Los Angeles, Leonard is averaging 25.5 points, 7.8 rebounds and over five assists, to go along with nearly two steals per game.

His running mate, George, is just as good, scoring 24.2 points a game with just under six assists and four rebounds, in addition to 40 percent shooting from beyond the arc. The Clippers haven’t lost a lot of games with both of these players in the lineup, so expect the Clippers to bring their best on Christmas.

Not to be outdone, the Lakers added Anthony Davis to team up with LeBron James and form a superstar duo of their own. In his first season in the purple and gold, Davis is averaging 27.9 points per game and 9.4 rebounds on nearly 50 percent shooting, along with the second-most blocks in the NBA with 2.7.

He joins James, who is scoring 25.8 points per game on nearly 50 percent shooting as well. He also leads the league in assists with 10.6 per game and averages 7.5 rebounds. Davis missed last week’s game against the Pacers, while James missed Sunday’s game versus the Nuggets, and both are considered questionable for Wednesday. Both stars will need to play on Christmas for the Lakers to take down the Clippers.

With the possibility of either Davis or James missing the game for the Lakers, or perhaps both, FanDuel Sportsbook has the Clippers as slight two-point favorites. Assuming they play, this game should live up to expectations.

Ultimately I will give the edge to the Lakers, where they are slightly better on the defensive end and have a star in Davis that will be borderline unguardable. I’m expecting this game to be low scoring, but I think the Lakers will win thanks to their size and experience down low. So give me the Lakers +2 to win on Christmas Day.