Kawhi to Lakers? If So, Are The 2020 NBA Finals Already Over? 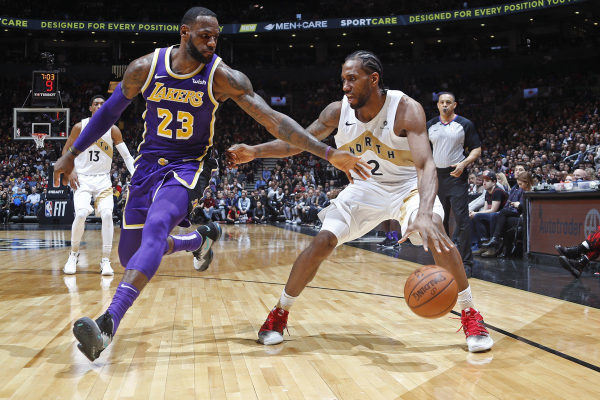 While it’s not a done deal, the word on the block is that Kawhi Leonard is already ready to sign to the Lakers. If he does, is the NBA season basically over before it even started?

Betting is all about information. When it comes to sharp bettors, they often get the distinction as sharp not just because they win consistently long-term, but most importantly, they get access to information before anyone else does.

Information moves lines, cashes tickets, and most importantly, dictates the outcome of some of the most important sporting events. And the NBA free agency season is no different. A spectacle all unto itself, there is nothing else like it in all of sports. And one of the biggest moves the season may have happened before the “real” season even begins.

All signs allegedly point to Kawhi Leonard signing with the Los Angeles Lakers. If he does, it’s a super-team that’s formed by Leonard, LeBron James, and Anthony Davis. If the move is completed, it means that the entire balance of the NBA shifts westward, without a doubt, and the already-favored Lakers become even more favored. So if this move happens, is the season over?

Can we just give everyone that bets on the Lakers to win the NBA Finals in 2020 their winnings a year in advance? Well … not so fast, folks.

In gambling, it’s not guaranteed until the ticket gets cashed. The same goes for futures tickets. If the Lakers land Leonard, their team gets two multiple-time Finals MVPs and one of the game’s most gifted players who hasn’t even hit his prime yet. Such a squad, on paper, seems primed to win multiple championships, and it would be the sort of outcome that would forge a potential Lakers dynasty, the likes of which hasn’t been seen in almost two decades.

But while bettors — even the sharper variety — are focused on the big names added to the team, they are forgetting a lot of other important variables. There are a whole lot more things going on than meets the eye. Without a doubt, one of the most important aspects of this process is the fact that the Lakers need depth.

Without a true high-level point guard on the roster, there is no guarantee that they will be able to even out the rest of the roster without jettisoning the likes of Kyle Kuzma, a player they’ve been extremely hesitant to give away. That said, it’s clear that the Lakers are running out of high-level talent that they can add to the roster, the type of talent that will offset the lack of depth.

At the end of the day, while it may seem that the Lakers have a lot of talent, and they certainly do, it takes a lot more than that to win championships.

While James has recently been one of the best players in the league as far as his resiliency, Leonard and James have seen tremendous mileage the past few seasons, and undoubtedly, Leonard most recently has faced a tremendous amount of wear-and-tear following the most recent Finals victory over the Golden State Warriors.

If you’re betting on any team other than the Lakers to win the West, and if you’re betting on a team in the Eastern Conference, one possible angle of victory could be that the fact that the Lakers may fall apart from injuries. If they are unable to fill out their team, have way too much depth, and are unable to manage minutes, there is going to be a tremendous amount of Lakers futures tickets going up in flames — not literally, of course.