Doncic Dominates Half Game, Is A Realistic 2020 MVP Candidate 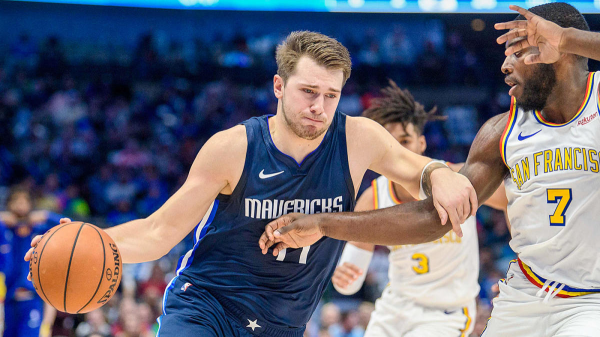 To be exact, it took Doncic 25 minutes and 30 seconds to put up 35 points, 10 rebounds, and 11 assists in a 142-94 blowout of the Golden State Warriors on Wednesday night. Doncic would exit the game with several minutes left in the third quarter with the game well in hand.

The Mavs’ 20-year-old star picked up another triple-double just two days prior when he joined LeBron James as the only players in the history of the NBA to score a triple-double with at least 40 points before turning 21.

His performance against Golden State was record-breaking, as well, as Doncic earned a 30-point triple-double in the least-ever amount of playing time.

Doncic also became the first player to outscore, outrebound, and out-assist the entire opposing team in the first quarter, which hasn’t been done since Allen Iverson in 2003.

With the win over the Warriors, Doncic has led his Mavericks to a record of 9-5, just three games back of the 12-2 Lakers. At this point in the season, that’s good enough to be level with the Utah Jazz for the fifth seed in the Western Conference.

So, as we witness the rise of what could be the next great NBA superstar, it’s time to start recognizing Doncic as an MVP candidate.

These latest Doncic triple-doubles are special, but they’re hardly extraordinary for the player. In fact, Doncic has already racked up seven triple-doubles so far this year, which is the most for any player through 14 games since Oscar Robertson.

Speaking of The Big O, Doncic has a real chance of becoming the third player in NBA history, alongside Robertson and Russell Westbrook, to average a triple-double for an entire season.

If the young star can keep up this pace, he’ll certainly be in the running for this year’s MVP, but how does he compare to the rest of the contenders?

For the 11-4 Rockets, James Harden is showing why he’s often considered to be the best scorer in the NBA. So far, Harden is averaging 38.4 points per game in addition to his 7.5 assists and 5.8 rebounds.

For the 12-2 Lakers, James is reminding the NBA that he’s the king. Through 14 games, James is averaging 25 points, a league-leading 11.1 assists (career high), and 7.9 rebounds per game.

For the 11-3 Bucks, Giannis Antetokounmpo is leading the Eastern Conference favorites with his 30.5 points, 13.8 rebounds, six assists, and 1.5 steals per game. Each of those statistics is the best mark on Milwaukee.

Does Doncic Have A Realistic Shot?

Alongside Giannis in Milwaukee, Doncic has an odd advantage that many other MVP candidates don’t. While Harden has Westbrook, James has Anthony Davis, and Kawhi Leonard has Paul George, Doncic and Giannis are more one-man shows for their respective teams.

So, any success these teams earn will be attributed more heavily to those individuals, as it should be.

With that in mind, let’s take a look at how the MVP race is shaping up through this early section of the NBA season.

With his scoring record, it’s no surprise to see Harden as the MVP favorite with odds of +175. Harden is followed very closely by Antetokounmpo, who’s sitting on +200 odds.

After a significant gap, another group of two is very close together: James with his +600 odds, and now Doncic with his +700 odds.

With seven triple-doubles on the season and top-four MVP odds, it’s more than fair to say Doncic is a real MVP candidate.