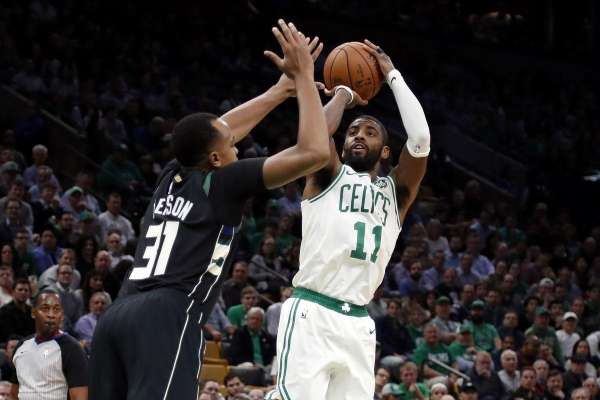 The New York Knicks head to TD Garden to take on the Boston Celtics in their third matchup of the season. In the first two games, these teams both won the road game in a rather close fashion. The Celtics are slowly starting to pick it up winning 4 of their last 5 games and their last 3. The Knicks are just 2-3 in their last 5 and that really exemplifies how their entire season has gone. The Knicks are a bad basketball team with multiple players that can have really nice games. These nice games will lead you to wins, but they are not a really common occurrence.

The Knicks have been experimenting with different player and rotations all year long, but recently they have really settled on the same starting lineup. It is a starting lineup that I actually think matches up well vs. the Celtics due to their frontcourt. Now, Mudiay has absolutely no shot to stop Kyrie Irving, but besides that, I don’t think this is a horrible spot. Enes Kanter and Noah Vonleh are the two best rebounders on the court in this game and that should benefit the Knicks.

I think that Noah Vonleh is probably the Knick in the best 1 on 1 matchup because of his post moves and size.  Morris, Hayward, or Tatum might be too much for them to handle. Enes Kanter has also had nice games vs. the Celtics over his career, leading the Knicks in scoring 3 of the last 6 times they have played the Celtics.

The other interesting factor is that Trey Burke has had multiple 25 point games vs. the Knicks in the last year, but he is out tonight. This scoring help has really been beneficial for the Knicks in this matchup and the Knicks will need Emmanuel Mudiay and Alonzo Trier to step up to help the Knicks stay in this game. Tim Hardaway Jr. is another microwave on this team, but he should see the Celtics best defenders all game.

The Celtics are starting to round into form after starting the season as easily the worst offense in basketball. We have seen Kyrie Irving start to step up on a nightly basis to carry this team, but the rest of the supporting cast has been pretty sketchy. Looking back on this season, Boston’s last game may end up being the turning point of the year for this team. Irving, Tatum, Horford, Morris, and Hayward all scored 15 or more points on the way to a nice win in Minnesota. Most importantly, Gordon Hayward had 30 points, 9 rebounds, and 8 assists on 8-16 from the field and 4-5 from 3.

We have not seen pre-injury Gordon Hayward all season but he seemed to flash last game. The best part is the peripherals that he got in that game. Hayward has always been a good wing facilitator and rebounder, but it seemed as though that had been taken away on this team. If they continue to see that kind of production from Hayward, they will quickly become the talk of the Eastern Conference again.

In this matchup, I am curious to see how the Knicks attempt to defend Gordon and Kyrie because they should present the biggest problems. Kyrie gets a dream matchup vs. Mudiay and the lack of good rim protection in the Knicks’ starting lineup. Hayward should see Kevin Knox,Mario Hezonja, and Noah Vonleh for most of the game, which I believe should allow him to attempt to continue his last performance.

I really think the Celtics are starting to lock in as a team, but the 13 point spread is just too much for me vs. a team that does have the ability to stay with any team on their best night. I will take the Knicks (+13) in this one.