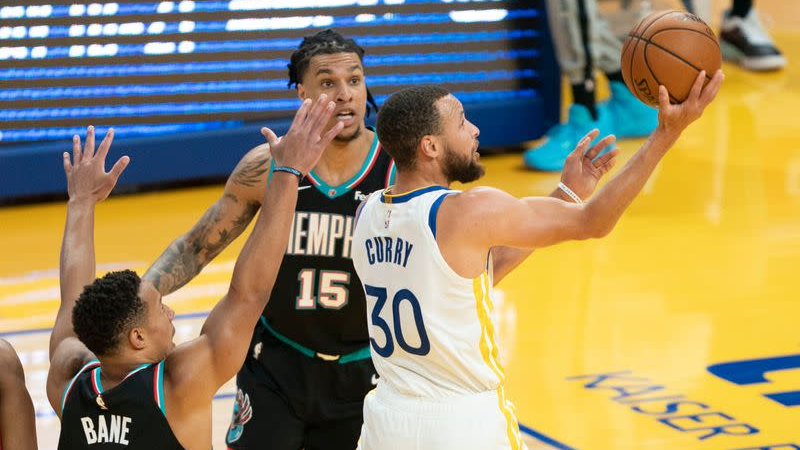 The final place in the first round of the NBA playoffs will be decided tonight in the Bay Area, with the Grizzlies vs Warriors matchup taking center stage on ESPN.

The Grizzlies fended off the San Antonio Spurs in an elimination game on Wednesday to book a return trip to a familiar setting. Meanwhile, Steph Curry and the Warriors suffered a tough loss to LeBron James and the Los Angeles Lakers to drop into this win-or-go-home game. The Warriors led by 13 at halftime and were ahead late, but they were unable to seal the deal.

Will the young and hungry Grizzlies book a first-round matchup with the Utah Jazz? Or will Steph shoot the Warriors into a Sunday showdown in SLC? Let’s look at tonight’s matchup.

Grizzlies vs Warriors odds are via FanDuel Sportsbook as of Friday, May 21 at 7:10 am ET. For more NBA betting odds, check out our NBA odds page. It features updated odds from FanDuel and other top online sportsbooks.

Will the Trend of Home Wins Continue?

Five play-in tournament games, five home wins. The Grizzlies and Lakers survived close calls on Wednesday night, while the three Eastern Conference play-in games were decided by 27, 18, and 27. But the outcome has been the same, with the home team and higher-seeded team coming out on top.

This is a rematch from just five days ago, when the two teams met on the final day of the regular season. In that matchup, the Warriors downed the Grizzlies 113-101 to decide the #8 spot in the Western Conference standings. After trailing by 17 at the start of the fourth quarter, the Grizzlies staged a major rally and led 97-95 with less than five minutes remaining. But Steph scored 11 points down the stretch as the Warriors outscored the Grizzlies 18-4 to close out the game.

Will we see a different result tonight? The Warriors have been strong as a home favorite this season, coming in at 15-4 SU and 13-6 ATS. That includes Sunday’s win, an SU and ATS win in which the Warriors were favored by 3.5. So that doesn’t play too well in Memphis’s favor. Very little does, really.

For the Grizzlies, it should still be fresh in their minds where things went wrong on Sunday. But how much does that matter when you’re dealing with the best shooter in NBA history? The Lakers needed a 30-footer from arguably the best player in NBA history to see off the Warriors. The Lakers are also statistically one of the best defensive teams in the NBA, which proved rather helpful in the second half as they overcame a 13-point halftime deficit and secured the win.

The Grizzlies, for all that they are and are going to be, have neither of those things going for them.

What Factors Do Favor the Grizzlies?

The Grizzlies’ performance on Wednesday night does not exactly inspire a wealth of confidence. Yes, you had to figure that a Gregg Popovich-coached team wouldn’t go out without a fight. But after a dominant first quarter, the Grizzlies had to scrap and claw and fight to see off the Spurs, who were 33-39 in the regular season.

That said, this was a big step for a youthful team that had missed two notable opportunities over the last year. Last season, they reached the postseason play-in series in the bubble against the Portland Trail Blazers. Memphis had to win twice to reach the first round. They were well on their way to knocking out the first win, leading by as many as eight in the fourth quarter. But they failed to close out the game, and their season ended there.

Then came Sunday, where they could have set themselves up to have tonight’s game in front of their home fans.

So, to look another potential missed opportunity in the eye and get over the line is a big step for a team that is still learning and growing. That can be inspiring for their second trip to the Bay Area.

Also, from a numbers standpoint, the Grizzlies are a better team on the road than they are at FedExForum. They were 20-16 SU and 22-14 ATS on the road in the regular season, and they were 11-10 SU and 13-8 ATS as a road underdog. So don’t write them off, even though the Warriors are an almost unanimous ML pick. The Grizzlies have the edge as the spread pick, and like Sunday, they should be in the game late. It just remains to be seen if they can deliver in the clutch this time around, or if disappointment awaits again.