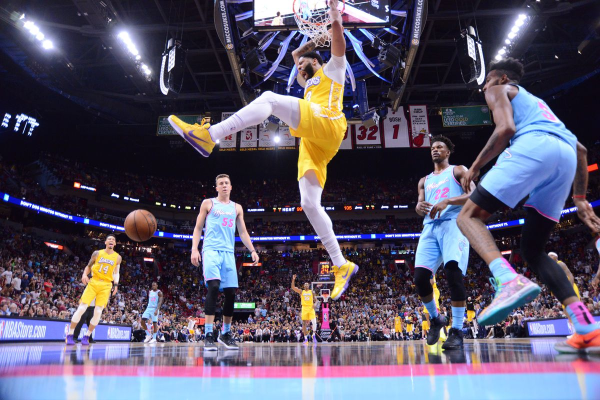 After a long and weird season, the LA Lakers will face the Miami Heat in the 2020 NBA Finals. Even with Anthony Davis’ arrival in LA, after both teams failed to make the playoffs in 2019, few would have predicted this particular finals matchup. The Lakers enter the series as heavy favorites against the underdog Heat.

Despite the apparent gulf in seeding (LA at 1, Miami at 5), the Heat have been defying their odds all playoffs. Led by the tough Jimmy Butler, they certainly have the fight to deliver an upset over the Lakers. This year’s finals is set to be a fascinating encounter between two teams who have shown incredible resilience to reach the finals in a challenging and bizarre season. The action starts on Wednesday, September 30th, at 9PM ET.

In each of their playoff series, the Lakers have won in give and have been led by stand out performances from Davis and Lebron James. Davis has led the team in playoff scoring with 28.8 points per game (ppg), closely followed by James’ 26.7. As of yet, no team has posed a threat to the Lakers, who have swept aside the Portland Trail Blazers, Houston Rockets and Denver Nuggets with relative ease. There’s no doubt that the red-hot Miami Heat will be their toughest test so far.

Despite not commanding the same level of recognition as the Lakers, the Heat have also been convincing in their playoff campaign. After sweeping the Indiana Pacers 4-0 in the opening playoff round, the Heat went on to beat the top-seeded Milwaukee Bucks, led by league MVP Giannis Antetokounpo, in 5 games. Their most recent test against the Boston Celtics was their toughest, taking six games to dispatch of the Celtics.

The Lakers go into game 1 as big favorites to make it 1-0, at -215 on the moneyline and -5 on the spread. If you go for the Heat on the moneyline, you’ll get odds of +180. The Heat shouldn’t be discounted, as they have used their depth and tough defense to wreak all sorts of havoc in this year’s postseason.

In their first games against the Portland Trail Blazers and the Houston Rockets, the Lakers failed to match the intensity of their opponents, going down 0-1 on both occasions. In contrast, the Miami Heat have won the first two games in each round of the playoffs so far. The Lakers have had an extra day to recover before the Finals, which may well play into their hands. However, if history is anything to go by, a bet on Miami offers good value.

If you back the Heat to make a faster start but not necessarily get the W in the opening game, you can get odds for them to win the first quarter at +128. Miami can approach this game and this series with nothing to lose and everything to gain as underdogs, and if their squad performs like we know they can, there is no reason they can’t get an opening game win against the odds on Wednesday.

As we’ve mentioned, in many ways the pressure is off the Heat and on the Lakers’ duo of LeBron James and Anthony Davis. If Miami can execute a game plan (with a heavy dose of Adebayo guarding both players) to neutralize or at least slow down these two players, they can definitely secure the W. The Heat also have plenty of depth on the bench if their starting 5 aren’t firing, a luxury the Lakers don’t have. 20 year old Tyler Herro has proved he’s a gamer who can make big offensive plays when it counts, and Duncan Robinson has shown a continued ability to knock down shots.

Neutralizing the threat of Lebron James is easier said than done, and he has proven he has an extra gear when it comes to the playoffs. James’ record speaks for itself. When the Lakers beat the Houston Rockets in Game 3, LeBron set a new record for most career playoff victories, surpassing Derek Fisher’s record of 161.

Over the course of 7 games, Lebron will certainly have his say and with the support of Anthony Davis, they still may prove too strong for this Heat team. That being said, they will need to be at their brilliant best to get the better of a Miami Heat team that has shown incredible toughness and cohesion throughout the postseason.

Game 1 will be an interesting encounter. I expect the Heat to start faster but the Lakers to be too strong over 4 quarters. You can get Double Result odds for Miami Heat/LA Lakers at +500, which provides great value.

Regardless of who comes out on top in Game 1, the first game of the 2020 NBA Playoffs will be an interesting encounter and could set the tone for the rest of the series. Will the Lakers duo set the tone, or will it be a team effort from the Heat that secures the W?