Giants vs. Dodgers (July 24): Can Kershaw and the Dodgers Complete the 4 Game Sweep? 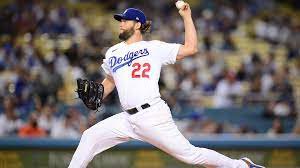 The Los Angeles Dodgers and San Francisco Giants finish off a long 4 game series on Sunday afternoon. The Dodgers have dominated so far, winning the first 3 games of the weekend.

The Dodgers have doubled up on the Giants, scoring 18 runs while the Giants have only managed 9. Along with the three games in this series, Los Angeles has put together a nice win streak. They have won 7 straight games entering their series finale.

The starting pitching matchup today is on completely opposite sides of the spectrum. The Dodgers have the outright advantage, and it shows, as they will have the best chance to win and finish off another sweep of their biggest rival.

FanDuel has the Dodgers winning in a low scoring game. Pitching will play a key role in the finale of the series, as Clayton Kershaw makes his first start since the All-Star Game.

Kershaw’s Career Numbers Against the Giants

There isn’t another team that Clayton Kershaw is better against than the Giants. In his 51 career starts against his biggest rival, he has pitched to a 1.91 ERA and has recorded a 24-15 record.

He has struck out 370 Giants in his career with 362.2 innings pitched. He has only walked 58 , and he has only given up 25 home runs. On average he is walking one batter per start and giving up 0.5 home runs.

His WHIP against the Giants is impressive too. It sits under 1.000 at 0.893. Runners are not getting on base, and because of the low ERA, no one seems to be coming around to score.

This season however, Kershaw has one start against the Giants, and it did no go so well. He was tagged with a loss after only pitching 4 innings due to a return from a month long injury bug.

This time out should be better for Kershaw. He has been healthy and pitching at a high level. He has won his last two starts, and even got the nod as the starter for the National League in the All-Star Game.

Kershaw will oppose a pitcher who has struggled this season. Alex Cobb has a 3-4 record and an ERA north of 4.00. Cobb hasn’t won a start since May 17th which was 8 starts ago.

The pitching matchup doesn’t even seem fair tonight, as Kershaw is set to face his best team while having his best success of the season. Alex Cobb has struggled and has not won a game in 8 starts.

The Dodgers have has the Giants’ number in the series so far, winning all 3 games at home. With the best record in the National League, the Dodgers look to grow their lead in the division and over the rest of the pack.