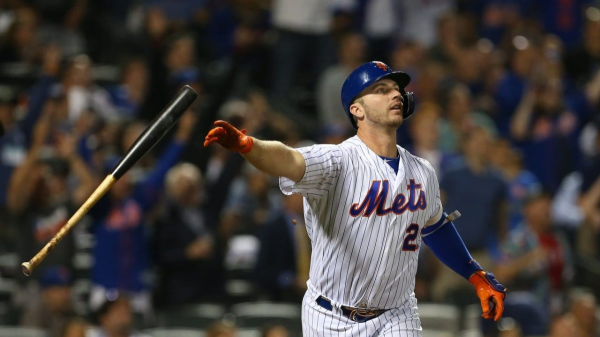 Wednesday night features a matchup of playoff hopefuls as the Chicago Cubs (70-61) take on the New York Mets (67-64) at Citi Field. This is the second of a three-game series, one that saw the Cubs take the first game 5-2. Chicago currently sits in second place in the NL Central, three games behind the St. Louis Cardinals, but also holds the second Wild Card spot.

The Mets sit a long way out of their division race (11.5 games back), but they only sit three games behind the Cubs for the second Wild Card. Needless to say, with approximately 30 games left, every game is imperative, and both teams will be looking to take game two on Wednesday.

The moneyline for this matchup features the Chicago Cubs at +118 and the New York Mets at -128. The over/under for runs scored sits at 7.5.

Cubs Look To Hang In Race

After letting the division lead slip away to the St. Louis Cardinals, the Cubs need to do their best to ensure that they don’t let the lead widen. Trying to pick up game two of the series will be righty Kyle Hendricks. On the season, he is 9-9 in 24 starts with a 3.20 ERA, 1.10 WHIP and opponents are hitting .239 against him.

In 143 1/3 innings, Hendricks has allowed 129 hits, 51 earned runs, 17 home runs and has struck out 122 versus 28 walks. In his last outing, a 1-0 win over the Giants, Hendricks went seven shutout innings, allowing three hits and striking out seven.

Javier Baez broke out of a mini-slump on Tuesday going 3 for 3 with a home run, double and three runs batted in. While Baez had been slumping over the last month, Nick Castellanos has been one of the hottest hitters. In the last 30 days, he is hitting .370/.400/700 with eight home runs, 14 runs batted in and 20 runs scored.

Anthony Rizzo has also hit well over that time, going .320/.457/.533 with four home runs, 11 runs batted in and 13 runs scored. Of those three players, Baez has had the most success against Syndergaard, going 4 for 7 against the righty.

Mets Hanging On By A Thread

With the Cubs holding the second Wild Card spot, this is a big series for the Mets, one that they would like to take the final two games of. To do so, they will turn to Syndergaard to try to take game two. On the season, Syndergaard is 9-6 in 25 starts with a 3.71 ERA, 1.18 WHIP and opponents are hitting .243 against him.

In 160 innings, Syndergaard has allowed 146 hits, 66 earned runs, 15 home runs and has struck out 156 versus 42 walks. In his last outing, a 2-0 win over the Indians, he went six innings, allowing two hits and striking out five.

Rookie Peter Alonso made history on Tuesday night. Hitting his 42nd home run, he has set the single-season record for a Mets player. Given his rookie status, it has been an absolutely dominant season for the slugging first baseman this year. In total, Alonso is hitting .265/.367/.596 with 42 home runs, 101 runs batted in and 79 runs scored.

Another player who has hit well this season is J.D. Davis. The third baseman is hitting .302/.367/.506 with 16 home runs, 45 runs batted in and 46 runs scored. Regardless, this is a team that certainly has some thump to their game.

While Hendricks has been pretty solid this season, he has struggled on the road. In 13 starts, he is pitching to the tune of a 4.76 ERA on the road versus a 1.79 ERA at home in 11 starts. Knowing that the Cubs have struggled as a whole on the road and that Syndergaard has been pretty dominant (1.82 ERA since the All-Star break), I like the Mets’ chances in this one. The Cubs are good enough to surprise, but for my money, I will take the Mets at -128.