Winners of Six Straight, The Mets Are Defying Odds That Amazing Can Happen in 2019 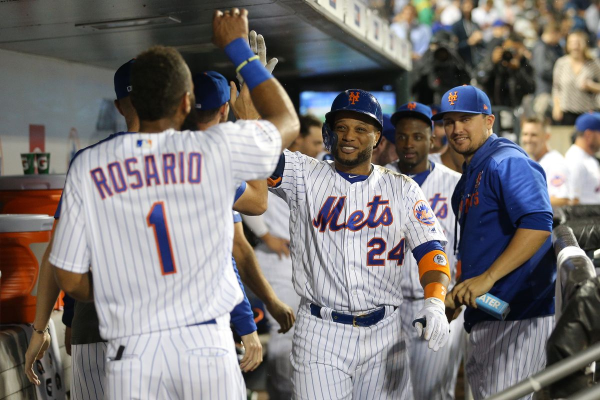 When the Mets decided to trade for starting pitcher Marcus Stroman at the deadline without dealing Noah Syndergaard or Zack Wheeler, much of the baseball world scratched its collective head. Many experts deduced that the move must have been a play for next season.

New York was 50-55 with a six-game gap sitting between it and the second National League Wild Card spot, after all.

Where the Surging Mets Stand

After Wednesday’s 7-2 victory over the Marlins, the Mets find themselves in the midst of a six-game win streak. Separated by a single loss to the Pirates, the Mets ripped off a seven-game win streak from the end of July to the beginning of August.

On July 25, the Mets had less than a 5 percent chance to make the playoffs, according to projections. On Aug. 1 and on the back of the seven-game win streak, those chances jumped to 21 percent. Now, it’s hard to see the surging Mets getting left out of postseason baseball.

Of course, an improbable run like the one the Mets are experiencing wouldn’t be possible without some impressive stats.

New York According to the Numbers

Throughout their current six-game win streak, the Mets have scored a total of 43 runs. Those numbers have helped to vault New York into the 16th spot in the majors for runs scored in 2019.

The New York lineup has enjoyed some quality performances from the likes of Jeff McNeil, who’s batting .339 with 29 doubles and 15 home runs, and Pete Alonso, who leads the club with 37 dingers and 83 RBI.

And since the All-Star break, New York’s 134 runs scored has made them the ninth-best offense in that period. But while the bats have certainly picked up in the second half of the season, it’s the team’s pitching that’s been most impressive lately.

After the All-Star Game, the Mets’ staff has earned the second-best ERA (2.77) in the majors, trailing only Cleveland.

Now, the arms and bats seem to be coming together for the New York club that’s flying up the standings and turning what looked like an impossibility into something real.

What the Odds Say About the Mets

On July 28, when New York was sporting that mediocre record of 50-55, the Mets were sitting on 500-1 odds to win the World Series. Now, the Metropolitans have cut those odds to just 50-1 to win it all.