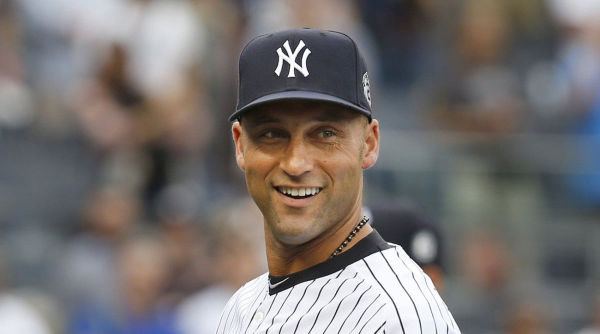 Major League Baseball has been marred by unending discussions about the Houston and Boston cheating scandals, so the sport was in desperate need of something to celebrate. On Tuesday, Derek Jeter delivered just that, coming within a single vote of being a unanimous inductee into the Hall of Fame.

Of the 397 votes cast by the Baseball Writers’ Association of America, Jeter appeared on 396. Although the Yankees great fell one vote shy of reaching the same honor as teammate Mariano Rivera, Jeter now owns the second-highest voting percentage in Baseball Hall of Fame history.

“Well, I look at all the votes that I got,” Jeter said. “Trying to get that many people to agree on something is pretty difficult to do. So that’s not something that’s on (my) mind.”

Jeter was joined by fellow inductee Larry Walker, who earned six votes above the 75 percent threshold needed to become a Hall of Famer. In his last year of eligibility, Walker jumped 22 percent from his mark of 54.6 percent last year.

Although Jeter wasn’t able to join Rivera as a unanimous selection for the Hall of Fame, he can be pleased to enter as a first-ballot inductee.

Of course, it’s no surprise to see Jeter earn baseball’s highest honor after a decorated career that began in 1995. His unique talent was apparent from the start, as Jeter won Rookie of the Year in his first season.

Before retiring in 2014, Jeter would help the Yankees to five World Series titles and was selected as an All-Star 14 times. In addition to his five Gold Gloves, Jeter hit .310 while recording more than 3,400 hits (sixth all-time) and earning five Silver Slugger awards.

Jeter was a staple in the MLB playoffs, as he appeared in a record 158 postseason games – 33 more than any other player.

For the team in pinstripes, the name Jeter and the No. 2 are synonymous. For his service to the team, Jeter joined the likes of Babe Ruth and Lou Gehrig by having his jersey retired by the Yankees.

Although the players who didn’t make the Hall of Fame cut this year will be disappointed for the time being, many made strides towards earning such an honor as early as next year.

However, the trio of Curt Schilling, Roger Clemens, and Barry Bonds was the closest to becoming Hall of Famers in 2020.

In his eighth ballot appearance, Schilling was just 20 votes shy of the threshold by earning 70 percent on 278 votes. His proximity to the 75percent needed to enter the Hall and the fact that he jumped up from 60.9 percent a year ago are the two main reasons why Schilling is a favorite to become a Hall of Famer next year with odds of -110.

Despite having careers tainted by steroid allegations, Clemens’ voting percentage increased to 61 percent, and Bonds earned a voting percentage of 60.7 percent. And while both players remain well below the 75 percent threshold, they both hold odds of +200 to be inducted in 2021.

Unlike this year’s class, which features a no-brainer candidate like Jeter, next year’s class is relatively weak, with players like Mark Buehrle, Torii Hunter, Tim Hudson, and Barry Zito set to make their first ballot appearances.

So, 2021 is a prime year for Clemens and Bonds to make up ground and possibly hit 75 percent.