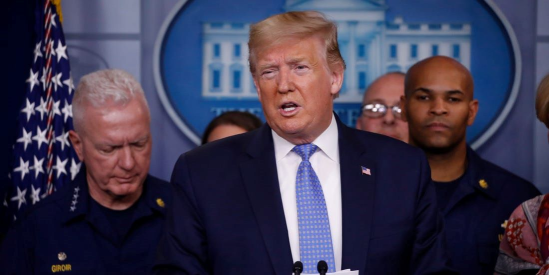 Uncertainty has prevailed over the sports world amid the coronavirus pandemic. Leagues were shut down, delays have been extended, and entire seasons are in jeopardy.

However, there could be some good news.

According to reports, President Donald Trump stated his belief that the NFL season should start on time in a conference call with major sports league commissioners, including the NFL, NBA, MLB, NHL, and more. The call took place Saturday.

As far as other sports are concerned, August and September appear to be the most optimistic chances for a return of sports. That’s when Trump said he hopes to have fans back in the stands.

When asked about an exact return date in a White House briefing, Trump said, “No, I can’t tell you a date, but I think it’s going to be sooner rather than later.”

While Trump is pushing a late-summer, early-fall resumption for sports, it remains unclear if scientists and medical experts with the most knowledge of the current pandemic believe that to be an appropriate timeline.

In response to the idea that the NFL season could start in August or September with 80,000 fans in attendance, California Governor Gavin Newsome said, “I’m not anticipating that happening in this state.”

For the time being, we’ll have to quench our thirst for sports with placeholders. After rumors have begun swirling, keep an eye out for another 1-on-1 match between Tiger Woods and Phil Mickelson, as well as a H-O-R-S-E competition involving high profile NBA players.

Since Utah Jazz center Rudy Gobert tested positive for the coronavirus, the NBA has appeared to be the leader in responding to the pandemic. On March 11, The NBA became the first major sports league to suspend play.

So, it’s reasonable to look to professional basketball for an idea of when a realistic return to the court, field, gym, or ice could take place.

Talking about a potential restart date without fans in attendance, Mavericks owner Mark Cuban said, “Whenever the experts say it’s okay and we are certain — 100% certain — we can protect ourselves and everybody involved, I think we’ll do our best to get out there and play. And I’m hoping, I’m hoping that that time comes before June 1.”

While that prospect looks doubtful at the moment, there are plenty of other major dates in the sporting world to keep an eye on.

While the rest of sports are shut down, the NFL plans to be in the spotlight when teams acquire the services of college football’s best prospects. Although players have been unable to undergo physicals and carry out pro days, the draft is moving forward as scheduled.

At this point, LSU quarterback Joe Burrow is a virtual lock to go No.1 overall to the Cincinnati Bengals with odds of -7000.

The major golf tournament scheduled for the second half of June remains on the schedule, but U.S. Golf Association executive Craig Annis has said that it’s “increasingly likely” the tournament will be postponed.

After the cancellation of Wimbledon, which was scheduled to begin at the end of June, the world of tennis is now looking to the U.S. Open. And because this tournament is set to begin at the end of August, it will serve as a strong indicator of whether or not other major sports will be able to resume according to Trump’s timetable.

Novak Djokovic is the current favorite to win the U.S. Open with odds of +145.

While Notre Dame and Navy will kick off the college football season a week early, the official start to Week 1 will take place with a trio of games on Sept. 3.

A group of familiar powerhouses lead the list of contenders to win the College Football Playoff. At +500, Alabama trails only +400 Ohio State and +200 Clemson.

While the first Sunday of the NFL’s regular season is scheduled for Sept. 13, professional football hopes to get underway with a Thursday contest. We’ll have to wait and see whether or not Week 1 will be pushed back.

Kansas City is the favorite to repeat as Super Bowl champs with odds of +650. However, Baltimore trails closely behind with odds of +700.