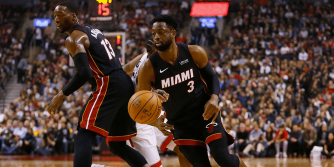 The Philadelphia 76ers are in Miami tonight to take on the Heat in what is most likely Dwayne Wade’s final home game. These last few days of regular season basketball are much more about motivation than they are about skill, and the line will show this in most spots. Here we have the Heat as a -5.5 favorite over the 3 seed in the East. There are a few reasons for this, but motivation is the clear top concern.

The 76ers are no longer playing for anything as they have locked up the 3 seed in the East and that means they could rest players. Both Joel Embiid and JJ Redick are already ruled out, and I wouldn’t be stunned if we saw Jimmy Butler, Ben Simmons, and/or Tobias Harris ruled out here. Butler is currently listed as probable, but any semblance of pain should make the Sixers consider sitting him in a meaningless game.

On the other side of the ball, the Heat are still technically alive to make the playoffs, but they need both Charlotte and Detroit to lose out. Even though it is incredibly slim, the Heat should be running out their best team as much as possible in this game. This best team can include a guy named Dwayne Wade, who is probably suiting up in Miami for the last time. This may not lead to a Kobe-esque farewell game, but I wouldn’t be shocked to see a D-Wade start and 35 minutes, which honestly would only help this team.

The 76ers will be missing two starters and could be missing other starters due to potential rest. Jonah Bolden is also listed as questionable for this game. Bolden would likely be the starter if he plays. It is interesting to note that before the last game, Brett Brown announced that Boban would start for the 76ers if Embiid was ruled out. To much disappointment of casual NBA fans, Embiid shut down the hopes of a Boban start and played on Saturday afternoon. Now, we are getting Embiid out, so it is possible that they stick with the idea that they want Boban to start, but I do think the Boban vs. Bolden starting is matchup based. The Sixers likely wanted Boban vs. an older, less mobile, and more physical Robin Lopez and they would likely want Bolden vs. Bam in this spot with Boban likely coming in for Whiteside’s minutes. If Bolden is ruled out, I expect Boban to start but think there is definitely an outside shot that the Sixers opt to run Amir Johnson and Mike Scott at the five more than originally expected.

The Heat will be without Josh Richardson, but they are much healthier now than they were most of the year. I would expect starters of Dragic, Waiters, Winslow, Olynyk, and Adebayo, but getting Wade over Waiters or possibly Dragic or Winslow is definitely a real possibility. Wade is retiring, but he is often the most productive player on the court for the Heat when he is out there. I don’t think Wade was capable of playing 35 minutes every day this season, but he definitely has it in him to do it once. The concern about relying on a big game from Wade is that the Heat do play in Brooklyn tomorrow, so extensive run could be hard on Wade. Tomorrow would likely be a better spot for him to just have the Wade show for an entire game, as the Heat will almost definitely be eliminated from playoff contention tonight.

It feels really strange taking the Heat by 5.5 over Philadelphia, but that is what I am doing. I think the Heat’s motivation is way more important than the overall skill level here. I think it is definitely possible to see the 76ers run out a starting lineup of McConnell, Smith, Milton, Scott, and Bolden and that is where this bet could really get off the rails.