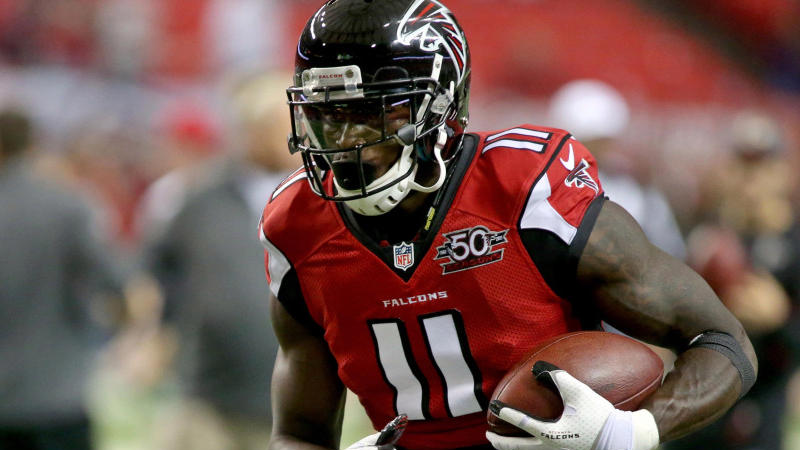 Superstar wide receiver Julio Jones is a major addition for the Tennessee Titans, but among his requests regarding his trade from the Atlanta Falcons was to be dealt to a contender.

The jury is out on whether that happened. As good as Jones is, the Titans are viewed as a fringe Super Bowl contender, at best, but as every dialed-in sports bettor knows: That just means there’s value to be found.

Titans general manager Jon Robinson bet big to bring the future Hall of Fame receiver to Nashville, taking on some money and dealing away a second-round pick in 2022, a pick swap (four down to six) in 2023 and taking on all of the $15.3 million owed to Jones this coming season.

And, he said, he had to make the move.

Robinson told NFL Network's Good Morning Football on Wednesday that this was too good to pass up.

“My charge is to get as many good players on the team as possible and I'm excited about the guys we had back on the roster, the guys that we added in the offseason, but when you're able to acquire a player like Julio and can add him into the mix of our football team, what we try to do offensively, those don't come around very often,” he said. “We thought it was a move that we needed to make for us. I know our fans are super stoked to have him here.”

Investors in the NFL’s futures market are not yet betting too big.

From a starting point of around 40-1, the Titans’ odds to win football’s biggest prize have dropped as low as 25-1 – but that’s still 25-1 and, according to a USA Today story (we didn’t do the math), that’s a win probability of 3.85 percent.

It’s not great, but it’s better than it was before the trade when the Titans were 2.44 percent.

Football is played on the field, and not on a spread sheet, though, so if Jones and his new QB Ryan Tannehill find some magic, it’s not hard to see the Tennessee Titans challenging the top AFC contenders.

The Kansas City Chiefs are a problem

Tennessee addressed some of its defensive shortcomings and, with Jones, filled a big hole created when receiver Corey Davis left during the offseason. Jones is a seven-time Pro Bowl selection and checks all the boxes for a big-time playmaker. It will be interesting to watch the impact as Jones teams up with equally dynamic wideout A.J. Brown.

No doubt, the deserving Super Bowl favorites are the Patrick Mahomes-led Chiefs.

KC is a heavy favorite at +260 to take the AFC title, with Tennessee behind them, as well as the Buffalo Bills, Baltimore Ravens, Cleveland Browns, Denver Broncos and Indianapolis Colts.

The Titans are now seventh-best among AFC title contenders, according to FanDuel Sportsbook, at +1400.

The Titans can play with any of those teams above them but would certainly have trouble with a healthy – and hungry – Chiefs team that was upset by the Tampa Bay Buccaneers in this year’s Super Bowl.

There’s going to need to be a lot of things clicking just right in Tennessee to overcome the Chiefs.

The AFC South and the fight with the Indianapolis Colts

The Titans are co-favorites, per FanDuel in their division, tied with the Colts.

The Titans have to believe this is good value, +110, with a healthy Julio and all-world running back Derrick Henry – especially when compared with the Colts’ answer to replace Philip Rivers at quarterback, Carson Wentz.

The division race appears to be between two teams only, given FanDuel’s odds on the Jacksonville Jaguars (+700) and Houston Texans (+2700) — unless, of course, No. 1 overall pick Trevor Lawrence and first-year coach Urban Meyer conspire to do something spectacular in Jacksonville.

Gotta be the Titans, right? and tied for 12th best at FanDuel to take the trophy.

To claim the Super Bowl win in franchise history, the division title is the first step. Then, maybe, wait to see if they can avoid the Chiefs until the conference championship game. Better yet, avoid them completely if the Ravens or Bills meet KC in a preliminary round.

The Titans are in the mix in a tier with teams including the Dallas Cowboys, Broncos, Colts, Miami Dolphins, New England Patriots and Seattle Seahawks. All of those mentioned share a similar need: staying healthy and needing quite a few breaks to reach the Super Bowl.

There’s value with the Titans, especially if you’re investing in a fully healthy 2021 from one of the best wide receivers ever to play the game.