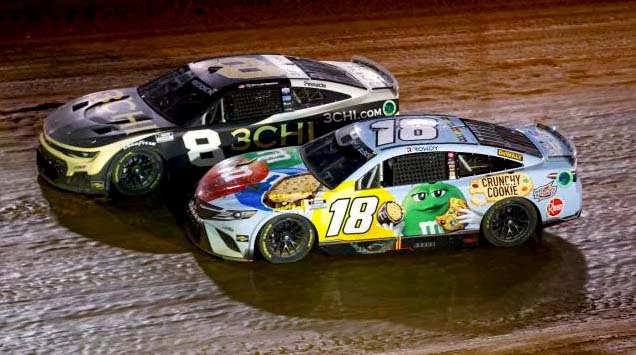 Last season, Kyle Larson won his first NASCAR Cup Series Championship. He dominated the season with 10 wins, including the Championship race at Phoenix.

Kyle Larson has a chance to repeat as the series champion, but he has fierce competition trying to run him down.

Young talent is emerging in the series. Rookie Austin Cindric was able to hold off multiple veteran drivers and win the Daytona 500 this year. Also, drivers who have struggled in the past are seeing more success with the Gen 6 car, unveiled this season.

The odds for the NASCAR season haven’t changed much since the beginning of the campaign. Title favorites are still emerging in the young season.

Here are the odds to win this season’s NASCAR Cup Series title from our trusted sportsbook partners at BetRivers.

Odds to Win the 2022 NASCAR Cup Series Championship (as of Monday, May 16)

Who Are the Favorites to Win the 2022 NASCAR Cup Series Championship?

Larson is coming off of his most successful season in the NASCAR Cup Series. The season saw him win 10 times, dominate at 1.5 mile ovals, and ultimately raise the championship trophy in Phoenix.

Larson has started this season strong with six Top 5s, including a win at Auto Club Speedway. He sits 9th in the standings and is 99 points out of 1st place.

He was the preseason favorite to win the title this year, and it hasn’t changed in the lines yet. Kyle Larson is a safe bet because of his consistency and his ability to adjust to any track conditions.

The 24 year old has shown he has the ability to win in the NASCAR Cup Series. He has already won twice this season at Martinsville and Atlanta Motor Speedway.

Byron has finished in the Top 5 four times this year and is consistently running towards the front of the pack.

He currently sits 4th in the championship standings with 13 races to go until the playoffs begin.

At +700 Byron is a good value pick for the title. This number will likely get shorter due to the solid finishes he has been having. Now is the time if you want to buy into this kid.

NASCAR’s most popular driver currently sits at the top of the championship standings, after his most recent win at Dover.

If you are looking for consistency in the front of the pack, Elliott is your guy. He has 9 Top 10s already this year in just 13 races. He has also finished every race this season and has avoided accidents and penalties that would push him further back in the field.

Chase has the ability to be successful on any style track he wants. His two greatest strengths lie in road courses and Superspeedways. The youngster is always working on his craft and getting better at the little things.

He is hitting his stride midway through the year, and he will have a shot at winning his second title in three years.

The 2022 French Open is underway at Stade Roland Garros in Paris, France, and we are already almost through the first week of play. Tomorrow, the remaining third-round matches will take place, after which the men’s and women’s singles draws will be down to their final 16 contenders. In both men’s and women’s singles, there END_OF_DOCUMENT_TOKEN_TO_BE_REPLACED