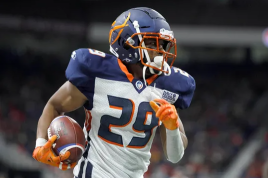 The Apollos are the lone undefeated team left in the AAF, and they just happen to be facing the only 3-1 team left in the league. The Iron are the hosts of this contest, but I think that the Apollos are set-up to take the Iron down. The biggest matchup here is the Apollos offense vs. the Iron defense. I trust the Apollos offense more. I think that they have a lot of talent on that side of the ball and it has shown over the first 4 weeks. The Iron have been very reliant on their defense through the first four weeks, and it has been very solid. The issue is that the quality of their opponent in this spot is going to be on a different level. It is not hard to argue that the Apollo offense is the best unit in the AAF and I think that will be put to the test in this game. If they come out and perform up to my expectations, I think they will win this game by more than a touchdown with the Iron’s offensive deficiencies hurting them in the end.

The Stallions come into this game with an unimpressive 1-3 record, but I don’t think that tells the whole story. They have faced the two best teams in the league and played them both relatively close. I think that this is a sign of things to come and this 5.5-point line is just too good to pass up. The Fleet lost their starting QB in the first half of last game, forcing them to go back to week 1 starter Mike Bercovici. I think this hurts the team and can also hurt team morale if Bercovici struggles at all. The nicer weather this week should allow the Stallions to be a little more explosive on offense and I think they can win this game outright.

This is likely a matchup between two of the worst teams in the AAF. I expect to see both teams really try to get a win on the board here. The Legends are struggling to see the light at the end of the tunnel, as are the Express, so another win on the board is very necessary for these teams to gain any momentum. Their best performance was last week, as was Memphis’s. I expect both teams to expect to win this game going in, but I think that the Express are just a more talented team. With Mettenberger at the helm over Hackenberg, they have looked much improved, and I expect to see this team pick up some momentum after their first win last week. I think that the Express showed some confidence and swagger in their last performance that I think can carry over to this one. The Express as dogs in this spot is a steal.

The Hotshots do not look like the team I saw in week 1, and it is very concerning. The Hotshots started the season with a 38 point performance, and they have only regressed since that point. I think that the Commanders defense is susceptible to giving up the big play, as we have seen in some games, but the Hotshot offense hasn’t really shown me anything to believe in. I think the Commanders are the more confident team heading into this game and I think it will show up on the field on Sunday. I like the Commanders here +2.5.

Tonight’s NBA betting schedule is lacking in overly compelling matchups, but tonight’s action will also be taking place with a few notable names missing. Booker, Morant, and Lillard Sidelined Tonight and Beyond Booker Out Versus Pistons Due to Hamstring Injury The Phoenix Suns lost Devin Booker (hamstring) on Tuesday against Golden State but closed out END_OF_DOCUMENT_TOKEN_TO_BE_REPLACED