Premier League Darts Night 13: Scots to battle it out in Glasgow 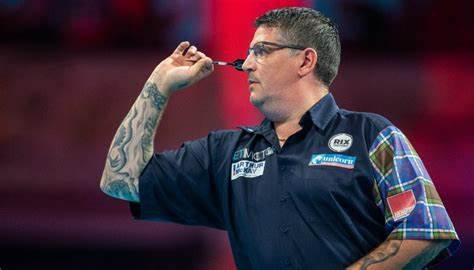 The Scottish city of Glasgow will be a hive of activity on Thursday with the Premier League Darts staged at the OVO Arena.

It will be a busy night in Glasgow, as the Rangers vs. RB Leipzig Europa League semi-final tie will also be taking place. Here, we focus on the drama from the oche for night 13 of the Premier League season.

With players vying for position at both ends of the ladder, there’s all to play for, and you can follow the action live on television and through live streaming apps.

The 3Arena in Dublin provided us with a fascinating evening of darts, with James Wade upsetting the odds to beat Michael Van Gerwen, Gerwyn Price and Jonny Clayton to win the night.

That took the Machine’s tally for the season to two nights won and 15 matches won, placing him third in the Premier League behind Clayton and Van Gerwen, who have both won three nights.

At the opposite end of the table, we find former Premier League champion Gary Anderson holding up the rest of the division.

The Flying Scotsman is ranked eighth of eight players with just seven points on the board and time running out to climb towards the prize places.

To make the playoffs, Anderson will require a huge effort in Glasgow and the coming weeks, but he was hammered in Dublin last week, and it appears he has thrown in the towel. Finishing bottom of the league would be a huge disappointment for Anderson and his army of fans.

Others who have been struggling with the pace this season include Michael Smith and Gerwyn Price, but both players are in a better position than Anderson and know a victory in Glasgow could turn their season around and push them towards the playoffs. A tense night lies ahead.

The opening match of the night could have been the main attraction as two Scottish players, and familiar foes go head-to-head in the opener. This match will bring the curtain up in style, but what can we expect, and which player is worth backing, Snakebite or the Flying Scotsman?

Neither Wright nor Anderson have played to their potential this season, but Wright is in the mix for a playoff finish, and it would come as no surprise to see him lift the Premier League trophy. The winner of this match should go on to win the night and delight the thousands of fans who pack the arena.

What can we say about James Wade? The Machine continues to blow hot and cold, and we can never be sure what to expect from him. When he’s at his best, there’s no doubting the fact he is good enough to win any competition.

Wade has never enjoyed a support north of the border, and he’ll attract the attention of the boo-boys on Thursday, which could throw him off his stride. Jonny Clayton is the current league leader and will show why with a strong performance and win over Wade.

Here we have a basement battle between two players who have been out of their depth so far in this campaign.

The beautiful thing about the Premier League is the race isn’t over until the finish line, and both players involved in this shootout will know that.

The winner will keep alive their dreams of playing in the latter stages of the competition, leaving the loser to pick up the pieces of what has been a shambles of a campaign.

Michael Smith is the underdog here, and he probably deserves to be given his poor form this season. But he was one of the standout performers last time and will travel to Glasgow confident he can rescue his challenge, getting it back on track.

Last week, he hammered Gary Anderson 6-2 in Dublin, then pushed Jonny Clayton hard in the semi-final.

The bookies are with Price here, but we are happy to take a chance on the improving Smith, and we’re hoping he repays that faith. In addition to backing him to win, you can also get good value on the +1.5 legs handicap (currently -112 at FanDuel).

The main attraction in Glasgow sees Mighty Michael van Gerwen take on Joe Cullen in a match that could help decide pole position in the Premier League.

Ahead of this match, we find Clayton on top of the pool with 29 points which is four more than nearest rival MVG.

If Mighty Mike is to keep up the pressure on the current leader, he needs to win this matchup. But we know he is capable of strong performances when it matters most, and he’ll be fired up.

MVG enjoys the backing of the support in Glasgow and will do again on Thursday, which he will feed off. We are expecting to see MVG somewhere near his best.