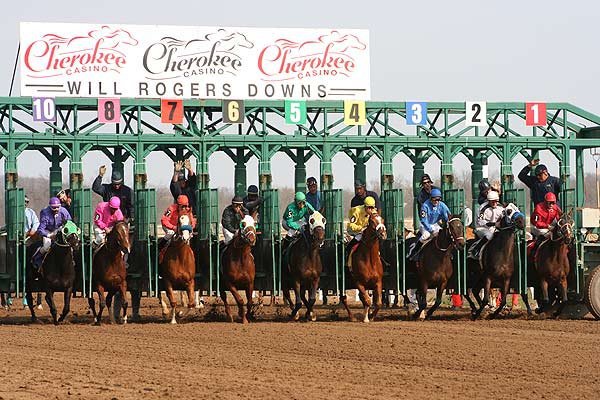 Horse racing means many things to many people. For some it is quality time spent with a father figure when they were kids. For others it is the horse that got them into the game. Will Rogers Downs is one of smaller tracks in the country. However, in 2020 it played a major role in the lives of horseplayers at the start of the Pandemic.

Only Game In Town

In March of 2020 the world stopped as the world learned of the COVID-19 virus that was rapidly spreading worldwide. In an instant the world changed and everyone was confined to their homes as lockdowns rolled throughout the country and the world at large.

As many businesses shuddered their doors, so too did many racetracks that were kicking off their spring meets. The virus even caused the Kentucky Derby to move from May to September.

Not everyone closed down however. Three tracks found ways to stay open while the world closed around them. Will Rogers Downs, Fonner Park, and Oaklawn Park all continued racing through the first wave of the virus in the United States.

With every collegiate and professional sports on hold and restaurants, movie theaters, and comedy clubs closed, people needed entertainment. Cue Will Rogers and the pandemic boom of horse racing.

Record Handles at Will Rogers Downs

In 2019 Will Rogers Downs handled $16.8 million, a decent pull for the small Oklahoma track. In 2020 the track saw a total handle from all sources reach $131 million. You read that correctly. The handle increased almost 700% thanks to the new swath of viewers who normally wouldn’t have even checked the entries at the track.

With Will Rogers playing such a major role in the bankroll of any pandemic horseplayer, there is an almost civic duty to playing the track that gave so many players something to do in the darkest days of the pandemic.

For more information on racing from all of the Will Rogers action, check out our free handicapping tools.

Tonight, the most pivotal game of the 2022 NBA Eastern Conference finals takes place in Boston, with the Miami Heat taking a 2-1 series lead into their matchup with the Celtics. In Game 3 on Saturday, the Heat took control early, outscoring the Celtics 39-18 in the first quarter and leading by as many as END_OF_DOCUMENT_TOKEN_TO_BE_REPLACED