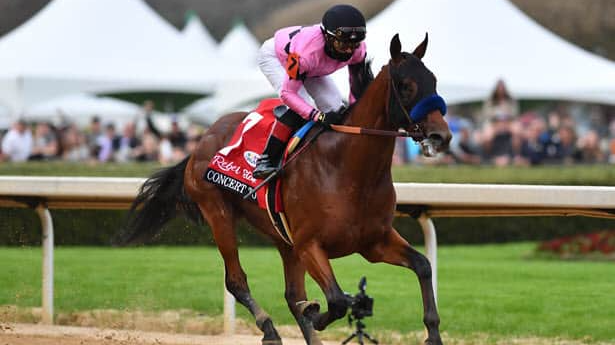 The three big Kentucky Derby prep races this past Saturday failed to provide any firm answers for bettors looking to identify the winner on the first Saturday in May.

Though he was a top contender entering his race, Essential Quality’s narrow victory in the Blue Grass Stakes inspired more questions than answers about his Derby favoritism.

The shiny, new toy among Derby prognosticators is Santa Anita Derby winner Rock Your World, and pour me a drink, Bourbonic posted a 72-1 upset in the Wood Memorial.

On Wednesday, we learned that two top runners — Fountain of Youth Stakes winner Greatest Honour and UAE Derby winner Rebel’s Romance – will not make the starting gate at Churchill Downs for the Kentucky Derby.

Here’s a top-10 contenders list to help clear up the picture a little.

He’s the wild card, given his biggest career test won’t come until this weekend’s Arkansas Derby, though handicappers have questioned how telling a victory over a seemingly over-matched field will prove to be.

Caddo River and Hozier, both of whom Concert Tour already defeated in the Rebel Stakes, are the prime adversaries.

After a stunningly impressive win in the Southwest Stakes, the gray colt had to grind and claw to claim a victory in the Blue Grass Stakes. Was that a horse who refuses to lose, or one who showed some vulnerability?

He had run only two races, both on turf, prior to Saturday’s victory in the Santa Anita Derby.

Sadler said the strategy had been to avoid the Bob Baffert horses until his colt was ready. He landed in a perfect spot, as former Kentucky Derby favorite Life Is Good is now off the Derby trail, and took a dramatic step forward.

This race showed his quality, given he set the early (and quick) fractions and is bred to enjoy more distance. He also earned a 100 Beyer, the best number among the contenders to this point.

As winner of the Florida Derby, Known Agenda gives Pletcher his best shot. Known Agenda has won three times at two turns and is in great form.

According to the Lexington Herald-Leader, his Florida Derby Equibase Speed Figure of 112 is the best of any Derby contender.

He won the Louisiana Derby, but by the time he enters the Kentucky Derby starting gate, he will have been off for six weeks. Only two Kentucky Derby winners since 1956 have had a layoff of more than five weeks. (Authentic last year and Animal Kingdom, a six-week layoff in 2011). He's also in great form, though, working four furlongs in :49.40 at Santa Anita on Saturday.

He’s the guy who pressed Essential Quality stubbornly through the entire length of the home stretch in the Blue Grass Stakes. How good can he be? Very good, if the effort wasn’t too much for him.

By the looks of Bob Baffert, the 4-5 favorite in the Santa Anita Derby did not offer an encouraging effort. He’s running out of time now, and, being soundly thumped by Rock Your World, would need to find a little something extra to compete on May 1.

He didn't win the Risen Star Stakes or the Louisiana Derby but he ran hard and delivered Beyer Speed Figures of 96 in both starts. He's probably the better bet among the Bourbon names (Bourbonic was 72-1, after all).

The aforementioned Risen Star Stakes was a showcase for Mandaloun, but that was the horse’s high point. A puzzling effort in the Louisiana Derby doused the hopes for a Kentucky Derby title. Regardless, he’s been training well and does have that Risen Star Stakes potential again.

Caddo River was the favorite in the Rebel Stakes but wasn’t having any part of the racing tactics attempted by Geroux. He insisted on trying to run with Concert Tour and that didn’t work out too well.

The good news: We don’t have to guess how well he can run – he and Concert Tour get together again in Saturday’s Arkansas Derby so he has a real chance to move up in the standings and qualify for the Run for the Roses. He’ll need to win or to finish second to gain enough points.