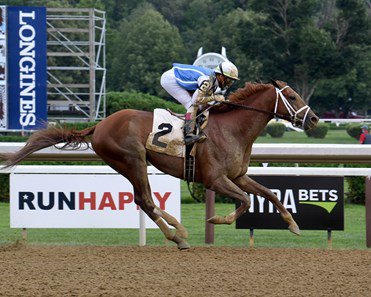 The Saratoga meet is winding down. This Saturday features 4 stakes including the Flower Bowl and the Jockey Club Goal Cup.

Saratoga’s weather can always be a little touch and go. This year has been particularly frustrating for turf players who have seen over 3 dozen races come off the grass.

Good news is in sight however. Saratoga Springs appears to have a stretch of sun coming up with moderate temperatures that should allow for all races to remain on the turf on Saturday.

With lightly raced horses on the Saratoga turf kicking things off, #9 SHERIFF BIANCO seems to have the best edge in this race based on speed, stamina, and class. #8 B C GLORY DAYS may be able to get the best of the race flow in this spot. #5 WAR SMOKE has great connections and could be rounding into form. #12 SUIT OF ARMOR is well bred and could get the job done in this spot.

#3 GRUMPS LITTLE TOTS has the top power rating in the group and has kept great company of late. #5 LEGIT could be a dangerous runner here based on the pace advantage the horse seems to have in this spot. #6 HEAVY ROLLER seems to be on schedule and could be cycling up to a top performance. #8 ASHAAR could perform well here given the horse’s record at the distance.

#7 PIPELINE is the class of the field and will look to use his stamina to bottom out this field in the lane. #4 UBIQUITOUS seems to fit this race on speed figures and race flow. When a horse runs the best numbers and has a run style supported by track profile, they can be extremely dangerous. #6 CODY'S WISH shares the best record at the distance with #4. #5 BALTASAR Is coming into the race in good form.

#7 RISKY MISCHIEF is the best bet of the day on the Saturday Saratoga card. If this one shows up, everyone else is running for 2nd. #6 HARPER'S IN CHARGE has a shot with a forward running style in a paceless turf sprint. #2 FORT DRUM has been good at this distance and has to be respected. #9 MEET THE BEAUTY could take a step in the right direction in this race.

#6 SOUPER SENSATIONAL is the best based on power ratings and speed figures. #5 AMENDMENT NINETEEN is also a major player with great connections and top class figures. #2 EDIE MEENY MINY MO could get the right set up here and has been good at 6 furlongs on dirt. #1 OXANA also has a great record at 6 furlongs and is rounding into top form.

With all of these Saratoga maiden races, watch the board to see if anyone is taking significant money. That may indicate smart money knows something. #9 OHTWOOHTHREEFIVE rates out well in a lot of statistical categories, but runs here against lightly raced horses who lack data for side by side comparison. I give the edge to the horse’s experience. #6 ANNAPOLIS is bred to love the surface and is dangerous. Early in the career connections can play a major role in how quickly horses get good. If that’s that case, #2 I'LL FIGURE IT OUT is extremely dangerous. #8 NYQUEST NIX looks like he could be ready to pop a big one.

#3 TEN GAUGE is in good form and has been running against really good horses thus far in the career. #10 BRIGADIER GENERAL has the top speed figure in this group and has a real shot. #4 MISBEHAVED is well bred for today’s conditions. #8 GALT hasn’t done anything wrong and is worthy of a use underneath.

#1 PUBLIC SECTOR looks really good in this spot and is the classiest horse in the race. #4 NEVER SURPRISED has a speed figure edge and could be in a good spot to get the jump late. #6 MOHS is in good form and could get the best of the race shape. #3 HE'SPUREGOLD is a negative handicapping play as he has done little to disqualify him from contention.

#10 ENGLISH BREEZE looks formidable on paper with edges in speed stamina, and class. She may also have a pace edge and get the best of the race shape. This is one of the tougher favorites to beat on the Saratoga card. #3 LOOKIN TO FLY has the top breeding rating and record at the distance. #6 JUST OK IS NOT OK goes out for top connections and should not be discounted. #7 FREEDOM MACHINE feels like a horse ready to step forward and could be a player underneath.

#9 CROWDED TRADE has an edge in class and may just outlast this group. #7 HOOPLA has had success at the distance and should enjoy the race shape. #8 BABY YODA has been trending in the right direction and is at the right distance today. #3 DUCALE has a speed edge on this group and is a major player.

The first of 2 stakes races on Saturday’s Saratoga card will be on the inner turf. #3 WAR LIKE GODDESS has been very good of late and has the best speed and rating in the group. #4 MY SISTER NAT is another one that is cycling up and will be played equally with the #3 on every single one of my tickets. #1 LA SIGNARE could have a pace edge with a great late kick home. #7 COASTANA has been good at the distance. A jump up would be required to get by the top 3 here.

This race comes to Saratoga after previously being run at Belmont Park. #4 HAPPY SAVER has this field covered in many of the handicapping pillars. If the #4 doesn’t fire #1 FORZA DI ORO has a speed edge and is proven at the distance. #2 MAX PLAYER could have a good run with the pace of the race. #6 FOREWARNED may get the best run based on the way the track has has been playing so far this meet.

All of the action from Saratoga can be viewed on the Fox family of networks. Check the NYRA schedule for broadcast details.

The 2022 French Open is underway at Stade Roland Garros in Paris, France, and we are already almost through the first week of play. Tomorrow, the remaining third-round matches will take place, after which the men’s and women’s singles draws will be down to their final 16 contenders. In both men’s and women’s singles, there END_OF_DOCUMENT_TOKEN_TO_BE_REPLACED