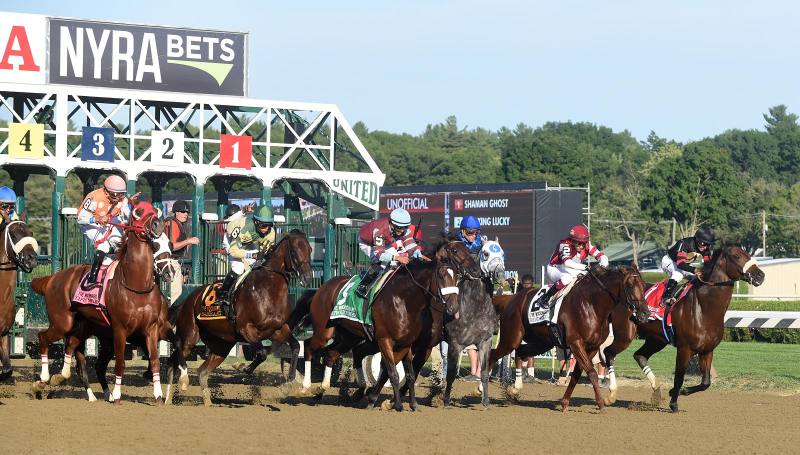 The main event of the day at Saratoga is the Grade 1 Woodward Stakes, a race over 1 mile and one eighth, run on dirt.

We have a full field with little early speed so pace handicapping tenets tell us that it should pay off to stay close to the lead.

That being said, I believe that half the field has at least some chance to win it and it is a pretty wide open race.

How the race shapes up will have a massive influence and so will racing luck.

Analysis and picks for the Woodward Stakes at Saratoga on September 1 2018:

Number 1, YOSHIDA will make a first start on the dirt after what has been a pretty successful career on turf so far. His trainer has been around for a while so one can guess that he knows what he is doing, especially considering that he won with the exact same ploy last year at Saratoga. The morning line odds setter seems to believe in these trends because otherwise I see little reason to assign 5-1 to YOSHIDA except of course the fact that he is the only Grade 1 winner this year amongst this group. On turf, YOSHIDA has shown decent early speed to place himself in contention and that can come in handy today. YOSHIDA has a chance based on class and trainer pattern. His post position is also going to help him get into contention, but I am not sure that I like 5-1 odds to bet on YOSHIDA.

Number 2 IMPERATIVE won a couple of stakes races last year but his return to the races in 2018 has not been particularly successful so far. Maybe he lost a step at 8 years old and at least it looks like his owner does not want to work him too hard, with only 5 races in the last two years. They just switched him to another trainer, but it looks difficult today and IMPERATIVE’s best days are probably behind him.

Number 3, PATCH has not run a lot in his career, which is not a great sign in itself and this year PATCH won only one race at multiple class levels below today’s contest. His last two races were also at lower levels and he did relatively poorly in them. PATCH would need a much better performance to have a chance and considering his running style, I don’t think that he will be much of a factor today.

Number 4, TAPWRIT has not had a good race in over 12 months and based on recent performance, there is little reasons to believe that he will go back to his best today. His last good race was the win in the 2017 Belmont Stakes and it looks like he might have peaked at that point. His win there and lifetime earnings will probably attract quite a few bettors and decrease his value. Obviously, it is not impossible for TAPWRIT, he has won much harder in the past, but I don’t like his chances.

Number 5 HENCE makes a big step up in class after winning an ungraded stakes earlier this month. HENCE has won graded stakes last year but never above the Grade 3 level so that does not bode well in a Grade 1… Moreover, his overall career performance is not very impressive, so I think that he is outmatched here.

Number 6, TERM OF ART makes a third start this year and he has a new racing style which seems to be paying off better for him: going to the front. Unfortunately for TERM OF ART, he has a bit of competition in that regard today and there will be more pace than he has enjoyed recently, for sure. More pressure and a longer distance are a bad recipe for success and even more so when jumping a couple of class levels up. I believe that TERM OF ART will be a factor in the beginning and fade away in the end.

Number 7, KURILOV has been alternating between turf and dirt and seems equally talented for both surfaces. Recently, he has not been able to close the deal at the stakes level but came close a few times. KURILOV has some early speed and that should come in handy today as there seems to be little pace. In his last race, he had to travel wide the whole way and was caught by a ground saver so maybe there is an excuse. Still, the stakes are high today and the recent speed figures are not very encouraging. Odds are that KURILOV will fall short again but there is an outside chance

Number 8, DISCREET LOVER shows decent past performances of late but faced the champion Diversify multiple time and could manage only minor prizes. His last two races are probably not as good as they appear as DISCREET LOVER has very easy trips twice and was able to catch a few tired horses in the stretch. His good speed figures are likely to attract a few bettors but I don’t think that DISCREET LOVER has much of a chance based on his recent glorified performances and inability to deliver at the Graded Stakes level.

Number 9, GUNNEVERA came back to the US shores to win in an easy race but did not impress a lot in it. Today will be his second start since the layoff and he did run well with this pattern last year at Saratoga. GUNNEVERA tends to come back from far behind and he probably won’t have a lot of pace to work with today. Still, if he repeats last year’s pattern, GUNNEVERA should be a threat in the stretch today, I just don’t like the odds.

Number 10, SEEKING THE SOUL is one of the favorites in this race and deserves respect. He has proven that he can win at this level and on this distance and he comes in with very strong workouts. Moreover, SEEKING THE SOUL works for a hot trainer and will make a second start since a layoff so we can expect an improved performance. SEEKING THE SOUL has not been racing a lot this year and that raises concerns about his health but based on speed figures, workouts and patterns, he seems ready to go and he has enough early speed to stay close to the action.

Number 11, LEOFRIC won going wire to wire earlier this month and that was a new racing style for him, which shows his versatility. He has been racing very well in the last couple of years, but today’s race is a big jump in class. LEOFRIC has some early speed and can stay close to the pace if he wants to but so far he has done that pnly at lower class levels. LEOFRIC works for a hot trainer but he would need quite an improvement to win today. It is not impossible but it looks like a tough field for him.

Number 12, SUNNY RIDGE has enough early speed to stay close to the pace and I think that it will be an important trait to have a good chance in this race. The fact that SUNNY RIDGE won his last race with a good speed figure and has also won on this distance in the past are both encouraging signs. On the flipside, SUNNY RIDGE has not won at the Graded stakes level in over two years so today’s class level appears challenging. But considering his racing style, the talent of his trainer and the fact that he is paired with one of Saratoga’s best jockeys, I like his chances at these odds.

Number 13, ZANOTTI scored a best Beyer Speed Figure last out and it was a natural progression for a second start after a layoff. He also did not have the best trip in this last race so it is possible that he would have had a better result and speed figure with more racing luck. The fact that he has good early speed is a plus today and ZANOTTI should be able to stay close to the lead or might even try to gun for it. The class level is a big negative factor however. ZANOTTI has never won at the Graded stakes level so today is a big step up. The starting gate is not going to help him either. But at 20-1 morning line odds, it is not impossible that his backers be mightily rewarded.

Number 14, RALLY CRY makes a second start this year and we can therefore expect a better race but we really need a much better race to see anything of RALLY CRY today. It was a bad loss in his last race in much easier company and his last good race was over a year ago. It was on this same Saratoga track though and RALLY CRY scored a speed figure that would allow him to beat everyone today if he can repeat. Looking at his last race, that seems to be a tall order however.

It is a pretty open field and with no clear pace setter, we can expect fireworks in the stretch and that’s conducive for surprises.

In this large field, I believe that SEEKING THE SOULD has the best chance. His racing style should be advantageous today and he is a proven winner at this level.

SUNNY RIDGE also has a good chance based on racing style and he has some strong recent performances. His class is in doubt but against this field, he does not seem out of place.

Also likely to be able to stay close to the action is YOSHIDA, starting from the inside. The post position will help him and granted that he does not hate the dirt, he should be in the right position to strike late.