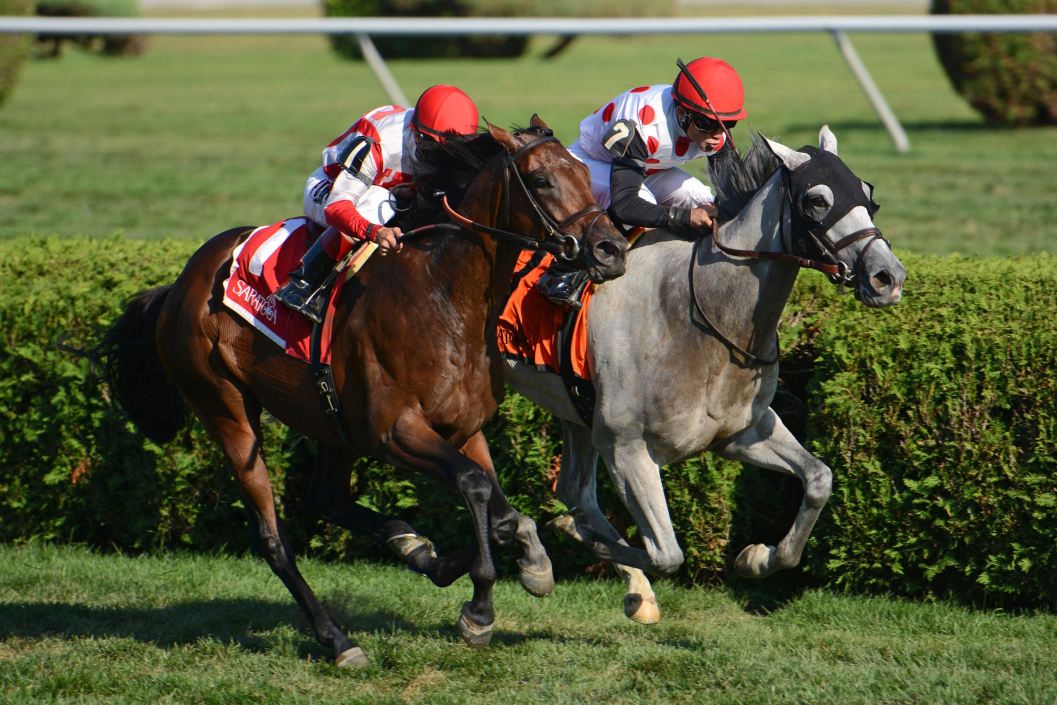 Nine pretty well-matched horses will try to go the distance on this Grade 3 Saranac Stakes and the favorites appear a bit shaky to me.

To start with, all the short-priced horses will try the distance for the first time and they are likely not going to have the perfect pace scenario that helped them in the past.

On the other hand, a few longshots have run well against strong opposition and might go out at high odds but a very good chance to score.

Analysis and picks for the 9th race at Saratoga on September 1 2018:

Number 1, UP THE ANTE, is the only genuine early speed horse and we can expect him to grab the lead with little opposition. If that happens, it will make his lasting for the whole distance easier but note that he is unproven on a long route and therefore there is a big question mark here. UP THE ANTE won his last race, going for the lead, with no opposition, so if he can get the same scenario today, he can repeat. But under any pressure it will be more complicated I think and there are some other horses interested in the lead. Another question mark for UP THE ANTE is on his fitness, considering that he last raced about 2 months ago and generally does not pause for so long. The trainer has had some success with this type of pause in the past however. If UP THE ANTE can get a clear lead, I think he can win it but as there is at least another horse likely to go for it, I think that UP THE ANTE will not be able to go all the way and at this short price he is a bad bet.

Number 2 MARCH TO THE ARCH won his last race on this distance and beat two horses that went on to win bigger races so that bodes well for his chances today. The decent series of workouts is indicative that he might have kept fit and that’s another plus in MARCH TO THE ARCH’s column. Of course, his classic turf racing style of coming from behind will require some pace in front and there is not a ton of it today so that puts a bit of a dent on his aspirations. Still, there is no denying the fact that he won in good company, and on this distance. Therefore, MARCH TO THE ARCH has a valid claim for this race and at 10-1 morning line odds, I like his prospects a lot.

Number 3, RAGING BULL, rebounded from the loss against today’s Up the Ante by winning a higher-class race at the start of this month. The loss against Up the Ante was not so bad when you consider than his opponent had been left as a clear front runner who set early fractions. In RAGING BULL’s last race, the opposition set much hotter fractions and he was able to beat them all in the stretch, his preferred running style. The added distance today should help him as well and the fact that he won right here at Saratoga and works for the hottest barn of the season are all very encouraging. I am not sure that RAGING BULL deserves to be such a heavy favorite however and the morning line odds seem a bit low to consider a bet on him.

Number 4, GOLDEN BROWN was solidly beaten in his last race, but it was a much higher class and a dirt race to boot, which has not been his best surface by far. If you take that race away, you uncover a couple of good races on turf, including a win on this distance at today’s class level. In that last turf race, GOLDEN BROWN did not have the easiest trip and yet beat the favorite who went on to win a Grade 1 race. All that make it sound like GOLDEN BROWN has the class to win today. Another positive for his chances is his tactical speed and GOLDEN BROWN should be able to stay close to the leaders which will be an advantage in the moderate pace we expect today. I very much like GOLDEN BROWN morning line odds of 12-1 too and I think that he deserves a lot more respect.

Number 5 SAND DANCER is not extremely likely to win but he is pretty likely to spoil the party for the front runners at least. SAND DANCER won two races in a row, gunning for the lead and prevailing in the end. The early fractions were not extremely impressive however, nor were the speed figures. Still, SAND DANCER visibly has some speed and we can expect him to challenge early and help make the pace hotter. Can SAND DANCER be there at the finishing line though? Nothing is impossible but the last few races were run in a much lower class and in relatively slow time. In addition, the last races were on shorter distance, so it looks likely that SAND DANCER will falter in the end and be overtaken.

Number 6, HOT SPRINGS saved ground throughout his last race but was a bit bothered in the stretch. He might have been able to run a bit closer to the eventual winner had it not been for that. Still, it was a fair beat and all things considered Golden Brown probably had the best of him either way. Note however that the third-place finisher went on to win a Grade 1 so that place by HOT SPRINGS looks very good. The workouts indicate that HOT SPRINGS has kept warm and might be able to run well again. The fact that he is able to stay close to the lead should be advantageous today, so I believe that HOT SPRINGS has a decent shot at this one and the morning line odds of 12-1 are very attractive.

Number 7, THERAPIST has a pretty impressive string of ungraded stakes victories, only broken every time he has tried a higher class… to add to the list of concerns, he has never won over more than a mile and therefore the distance today is a bit of a stretch. THERAPIST tends to start slow and catch up in the end, but with today’s pace looking moderate and some likely better horses able to beat him in the stretch anyway, I think that THERAPIST is not a good bet at the likely low odds he will start at.

Number 8, FREE DROP BILLY tried his luck in a bunch of high-quality races this year, including the Kentucky Derby and the Belmont Stakes. He did pretty poorly every time and therefore coming down a class notch makes sense. What makes a little less sense is him trying turf for the first time in this race, and after a layoff to boot. FREE DROP BILLY does not have the most impressive turf pedigree, so it is either a shot in the dark for the trainer or a way to prepare him physically after the layoff. In both cases, I think that I would need some pretty high odds to bet on FREE DROP BILLY winning today.

Number 9, MARAUD finished only a nose apart from today’s opponent Raging Bull when they faced off at the start of the month in a Grade 2 race. MARAUD could not have had a better trip in that race but because he was carrying a bit more weight, we can probably say that him and Raging Bull are pretty evenly matched in talent. MARAUD probably has the upper hand today, considering his tactical speed which should allow him to stay closer to the leaders. He does start from a poor post position however and I think that MARAUD will need a pretty hot pace to have a good chance. As one of the favorites, I don’t see good value in betting on MARAUD but there is no denying that he has the class to win today.

The favorites in the race all have dark spots in their resumes and I believe that a few outsiders are much better than what the track handicapper believes. I think that in this race it makes sense to swing for the fences and go with a few outsiders.

GOLDEN BROWN and HOT SPRINGS ran together in their last race and finished first and second. They beat the favorite fairly and that horse went on to win a Grade 1 race so there is a lot to like in their recent performance. GOLDEN BROWN was best that day but went on to lose in a Grade 2 stake, albeit on dirt. They are hard to separate and for me, it comes down to the price on each come race time.

Behind them, I like another high-priced horse, MARCH TO THE ARCH he also won on this distance and also beat some good horses last out so he is probably well placed in terms of class.