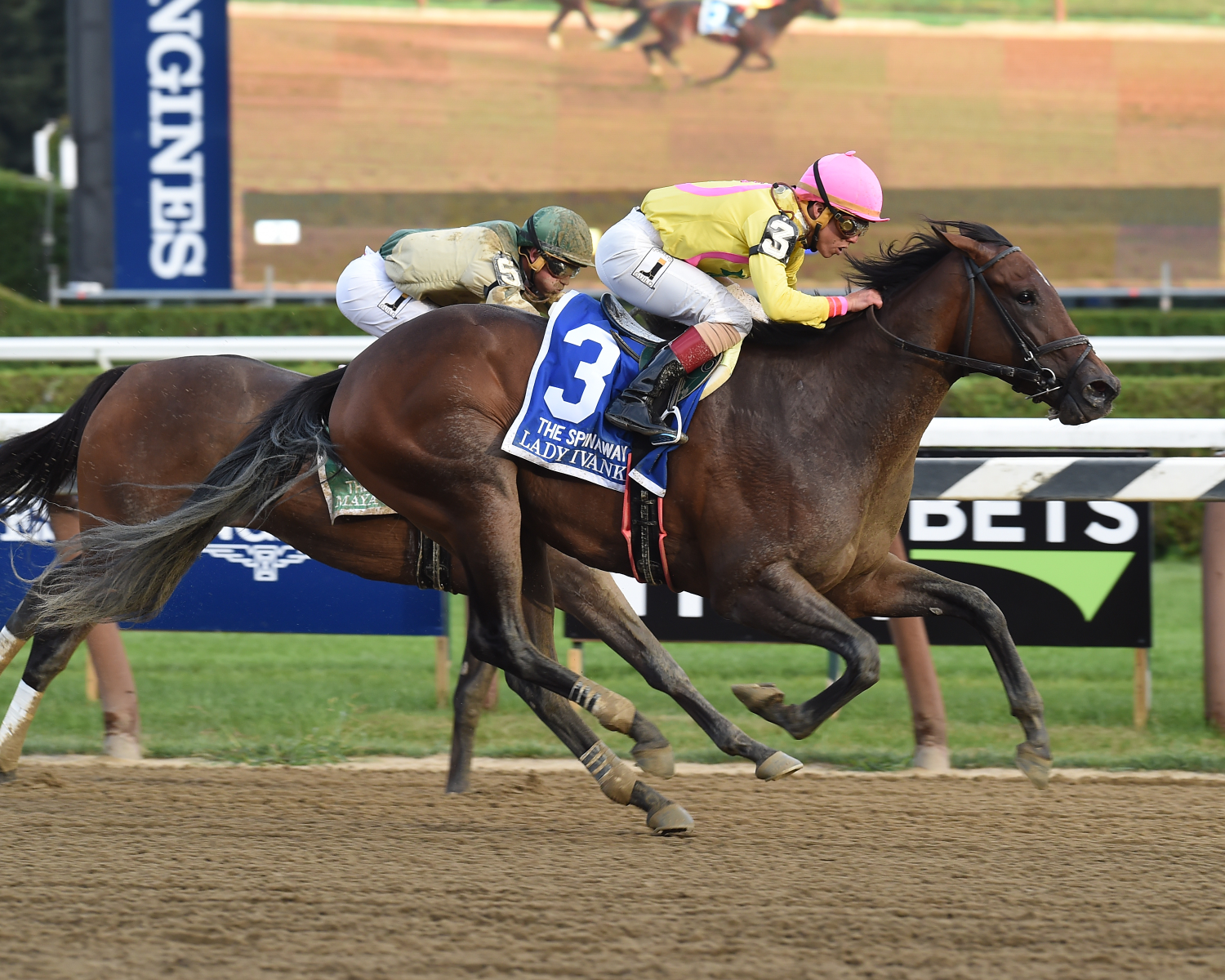 Ah…The joys of handicapping a Graded stakes race for two years old racing over an unfamiliar distance (for every horse in the field except one)… With still developing horses, a surprise in one of these races is always possible but thanfully, there are still some useful techniques to separate the wheat from the chaff. In particular, by using pedigree analysis, class handicapping and trip handicapping it is possible to uncover some horses more likely to win than others.

In today’s field, we have a few strong contenders and a couple of others with a decent shot. One thing is for sure, the Spinaway Grade 1 in Saratoga should be an interesting race to bet on.

Analysis and picks for the 10th race at Saratoga on September 1 2018:

Number 1, CASSIES DREAMER won her only start coming from slightly behind, which could be useful today, but the mere fact that it was a Maiden Claiming race disqualifies her from this Grade 1. If her trainer and owners were willing to lose her on the first race, she must not have a too promising future according to those who know her best…

Number 2 BABY NINA won a stakes race last month but did so with a pretty terrible speed figure so the quality of her opposition that day is a valid question. One that she beat went on to win another stakes race but again in a terrible time, so the figure of BABY NINA was probably fair. Horses can progress fast at two years of age but here there is a big gap with the favorites and therefore BABY NINA has only limited chances here today.

Number 3, VIRGINIA ELOISE had a very bad start last out and she probably hated getting splashed in the face with mud after falling behind. She finished the race very well and would have won it if it had lasted 50 more yards. Hopefully she will have a cleaner start today but even if she does, it might be difficult against some of her opponents who managed to earn much better speed figures in classier races. You have to consider that VIRGINIA ELOISE comes from a top sire and works under the tutelage of one of the best trainers in America but still, she needs a pretty steep progression to win today.

Number 4, CATHERINETHEGREAT won her last race in style, a Grade 3 race right here at Saratoga. She went all the way under pace pressure and still destroyed everyone in the stretch. If the race took a toll, you can’t say from the workouts which are pretty solid. CATHERINETHEGREAT is out of a young sire but it looks like he has strong daughters and her dam had success with her daughters so far too, therefore we can have faith in the pedigree. It looks like the pace is not going to be particularly strong today, with little opposition apparently, so there is a good chance that CATHERINETHEGREAT can repeat her wire-to-wire victory.

Number 6, SIPPICAN HARBOR is the only horse in the field who has run on this distance but the fact that she was able to do it on the dirt is an accident as that race was initially planned on turf. Still, a quick look at the run line shows that SIPPICAN HARBOR absolutely loved it, winning by 17 lengths… The morning line odds handicapper gives her no credit for the win for some reason and I am at a loss why. Yes, that win was in a Maiden race. Yes, that win was against a small field. Yes, SIPPICAN HARBOR works for one of the worst trainers in New York. But still, she won in a decent time, has trained well since and she has early speed starting from the outside which has been a positive style in Saratoga this year. I believe that SIPPICAN HARBOR deserves a lot more respect than the morning line odds of 10-1.

Number 7, CHASING YESTERDAY, goes coast to coast for this one having won her only start at Del Mar last month. Working for our newest hall of fame trainer and out of the great sire Tapit she has some pretty credentials. But did I mention that CHASING YESTERDAY is a half sister to the Triple Crown winner American Pharaoh? Just based on that, you could bet blindly but the speed figure earned on little urging is what should convince you. CHASING YESTERDAY starts from an outside post position, which is a plus at Saratoga and has a lot to offer today…

Number 8, GUACAMOLE had an incredibly easy trip in her last race and still fell short, earning a poor speed figure in the process. Considering her relatively unimpressive pedigree, there is no major reason to believe that the first two races were particularly unlucky or that we can expect miracles in terms of career progression. Considering her performance in a Grade 2, she will hopefully have a productive career but today she faces some very strong horses and therefore I think that GUACAMOLE will not do much.

Number 9, BELLA CIAO has been training pretty well leading to this one and it looks like her trainer is getting her ready to stretch in distance. She is jumping into the deep end today however and BELLA CIAO will need quite an improved performance to have a chance today against this field. The fast closing style can come in handy if there is a pace war but it does not look like BELLA CIAO has what it takes to win here.

Number 10, REFLECT is another one coming to Saratoga from the West Coast and in her bag she packs what appears to be a decent showing in a Grade 2 stakes. Watching the race however, you can see that she had a pretty good trip and little excuse to not do better. The field today is stronger no doubt and therefore you can’t give REFLECT much of a chance.

Number 11, RESTLESS RIDER had a nightmare trip last out, having to basically hit the brakes to avoid the horse in front who got pulled up. RESTLESS RIDER lost a good 6 length with that accident but still went on to win the race by 14 lengths… Needless to say that it was an impressive performance. She has been working out well but she has been rested for over two months so there is a bit of concern there, even though the trainer has won this way every year. Also helping her chances is the fact that a red hot jockey is on board and that she has some strong genes. As RESTLESS RIDER has more than proven her ability to come from behind, she has a chance here today if the pace is hot.

Number 12, LOVE MY HONEY comes from a good family and won a decent race last out but she might have been helped a bit by the Saratoga track bias and trip handicapping specialists will tell you that her reaction to being hit by the jockey in the stretch are not very encouraging. It looks like LOVE MY HONEY still has some things to learn and against this strong field, I think it is best to pass.

It is hard to be sure of your selections in a race for 2 years old fillies. At this age, horses can progress by leaps and bounds or freak out for any reason and lose the race by themselves.

For this reason, I find it better to mix and match and hope for a decent score with exotic bets rather than put all my trust in a single horse.

I think that my selections have a good chance to finish on the podium and I will therefore group them in multiple ways in Exactas and Trifectas.

Among this field, I think that CHASING YESTERDAY has the best chance. She looks to have a versatile style and has a pretty amazing pedigree, being the half sister of a Triple Crown winner and all…

Her main opponent today will be CATHERINETHEGREAT I think, She proved she can handle pressure and still deliver a win and today she might have an easier pace scenario. If she does, she can go all the way.

A couple of horses could spoil the party. SIPPICAN HARBOR is the only horse to have won on this distance and she starts from a good post position, with the right running style. She might surprise at long odds.

If the pace is hot, I think that RESTLESS RIDER will have the best chance to overtake them all in the stretch.