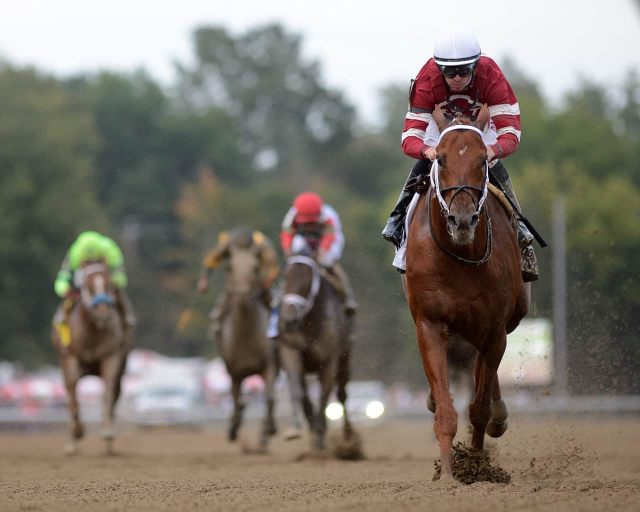 It should be a rainy day at the Saratoga racecourse, so we can expect a sloppy track.

If it plays out like on Monday, it means that the inside will be very heavy and that the better path will be in the middle of the track and horses close to the lead have the best shot.

There is a lot of speed in this race and that complicates matters, but most horses have shown ability to come from behind if needed. Race strategy by intelligent jockeys will be paramount.

The morning line odds favorite is very well placed and could benefit from the Saratoga track bias. Is her jockey up for the challenge?

Number 1, VERTICAL OAKS has won and placed at the ungraded stakes level, but more interestingly has won a Grade Two stake race last year on sloppy grounds. Most of her good races came in the rain so today’s conditions should be interesting for VERTICAL OAK. She also has done very well on the Saratoga racetrack. Too bad she starts from the inside post position as most likely the ground will be terrible on the rail… In terms of speed figures, VERTICAL OAKS can match them on the slop and she has pretty good speed. If she can get out of the inside early, she might have a good shot at long odds.

Number 2 CHALON won a few ungraded stake races including decent showings on sloppy tracks. She has been training well recently and she knows how to give a late kick to win a sprint. But CHALON is also on the inside post and she will probably need to get out of it unless she gets hindered by the Saratoga track bias…She has an interesting profile but at 3-1 morning line odds, I think that there are better choices.

Number 3, KIRBY’S PENNY will accept a sloppy dirt track and she has done well in the rain. She also has a killer record at the Saratoga Racetrack with 2 wins in 2 tries. KIRBY’S PENNY comes off a win in a Grade 3 race and was pressing the pace in it, to score a nice win in a good time. That was a bit of time ago though and she was given a 75 days rest… The trainer is not bad at bringing back horses to form and KIRBY’S PENNY has done well when racing fresh. The workouts are not so impressive however. There are positive elements, but the odds are going to be short and it might be wise to take a stand against her.

Number 4, THIRTEEN SONGS makes a big jump in class and does not have the speed figures to justify it. She seems completely outmatched here and you can add to that the fact that she is unproven on a sloppy track. She should not be a factor at all today…

Number 5 FAYPIEN was scratched from a turf stakes race on Monday, probably because of the appalling conditions on the Saratoga turf track that day. FAYPIEN has been running on longer distances for most of his career and was never exposed to a sloppy track so there is a question mark there. Her pedigree is strong for rainy conditions and she has the stamina, obviously, so maybe it can work. FAYPIEN has won and placed in Graded stakes and has shown pretty good speed figures so she certainly has her place here today. On shorter distance she has mostly pressed the pace which could work today, and she has an outside post position which should be favorable. The slow workouts are not so encouraging though and it was a bit of a long break. I think that the question marks justify passing on FAYPIEN at short odds today.

Number 6, FINLAY’S LUCKY CHARM is a Grade 1 and Grade 2 winner with a killer record. She has proved she can win on sloppy tracks, so in terms of records and class, it looks very good. The speed figures are also better than the rest and she has a pretty versatile style, being able to take the lead or come from slightly behind. FINLAY’S LUCKYCHARM starts from the outside post position and that’s a positive on the Saratoga sloppy racetrack. Now, there is a question mark: the time between races. FINLAY’S LUCKYCHARM has last raced over two months ago so we don’t know for sure if she is ready. She has however won in the past on long rest and she has a few good workouts. FINLAY’S LUCKYCHARM appears to be very well placed and can benefit from a strong track bias. I would prefer an experienced Saratoga Jockey but that is a very solid bet even at short odds.

The favourite FINLAY’S LUCKYCHARM deserves the short odds I believe. The post position is favorable, the speed figures are good, the class is very good, the workouts are good. What is there not to like? Maybe the long rest between races but I think that we can trust that she comes back in form.

To complete the Exacta bet, I think that the longer odds horse VERTICAL OAKS is the right choice. She is a sloppy track specialist but needs to get out from the inside track… Her jockey has a good record here so maybe he can find a way.