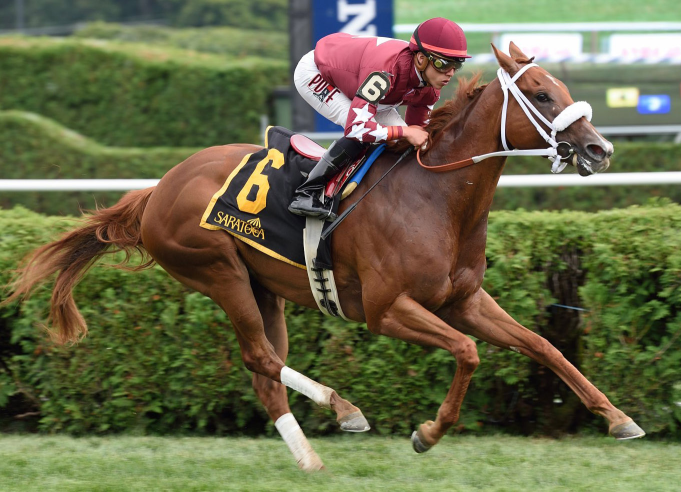 Few races are more exciting that Turf sprint races, with the horses usually pretty bunched up in the turn and racing luck playing a big role in the results.

With today’s group of fillies, we should see another exciting race at Saratoga in this Caress Stakes for $200 000.

This is a very well-matched group of older fillies so there is a lot of data to analyze and something to like in about every contestant.

On the Saratoga Race track turf sprint course, horses on the outside post positions have tended to fare better and it is better to stay close to the action. But in such a large field with a hot pace expected, could we see some surprises in the stretch?

Number 1, JUST TALKIN never won at this class level and only has places to her racing credit in (ungraded) stakes company. She is however a turf sprint specialist with some early speed so if anything, she should try to have a say in the early goings. She will have a lot of competition at this stage though and today JUST TALKING is actually going half a furlong further than she has raced in over a year. The workouts are not particularly great either, so I don’t think that JUST TALKIN really has a good chance to go all the way.

Number 2 MORTICIA has good early speed and will stay close to the action but with today’s jockey on board she has been known to just wait out on the leader and attack in the turn. With a lot of early speed in the race, that might be a good strategy today. MORTICIA is at the right class level, having won multiple stakes and even a Grade 3 last year. She won an almost similar race here at the Saratoga Race Track this time last year. MORTICIA likes to run fresh so the fact that she was given a long vacation is a pretty good sign. The excellent workouts are another one, so MORTICIA should play a part on the podium, granted she does not get too boxed in…

Number 3, TRIPLE CHELSEA has a more patient running style than most and this can be an advantage as the pace is likely going to be hot. TRIPLE CHELSEA comes off 3 straight wins in ungraded stakes class but has not run for a while. She had really found her stride this year so that race gap is a bit of a concern but maybe the trainer had his sights on this one. TRIPLE CHELSEA has not had much success when racing fresh and the trainer’s stats in that setup are not great either so that’s a big question mark… The pace profile is interesting but I have my doubts about the layoff and there is a good chance that TRIPLE CHELSEA gets boxed in with the inside post position and does not find room to run her race. With those doubts and the likely low starting odds, I think it is wise to take a stand against TRIPLE CHELSEA here.

Number 4, LULL is the classiest horse in the field, without a doubt. She won multiple Grade 3 stakes and did OK in a Grade 1 last month. The issue is that these performances actually were run on much longer distances and LULL has never won in short sprints. In somewhat longer sprints, LULL has shown good closing speed and that could come in handy here. Still, I think that LULL might not like the very short distance and her recent class racing level should attract the betting public. I think it is better to look for value elsewhere.

Number 5 FAYPIEN makes her second start on the turf after a decent showing in a Grade 3, 7 furlongs, sprint at Belmont Park last month. It is interesting that her star trainer decided to move her to turf considering that she did pretty well on the dirt… FAYPIEN ran mostly routes and longer sprints on that surface, often with a presser style which would come in handy today. In his recent races, FAYPIEN went straight for the lead though which would be a bad choice in this hot pace scenario I believe. FAYPIEN works for one of the best trainers in the world and he probably knows what he is doing… But being still unproven on the Turf and with a question mark on the running style they will pursue, it might be better to leave her out of the main tickets and keep her only on the Superfecta.

Number 6, FIRE KEY is coming back for a second race after being stopped for the winter. That’s a pretty good angle for that trainer and he seems to like to give a race to a horse before pushing her for the win. FIRE KEY won this way in the past, but the workout likes were a bit better… The come from behind style should be very useful here today and FIRE KEY seems to like the distance and the Saratoga Race Track. I think that she can at least grab a place in this one.

Number 7, GIRLS KNOW BEST has a couple of wins at this class level and race distance, so she seems to be well placed. The very fast workouts are a good sign so a fourth win in a row is not impossible. GIRLS KNOW BEST does not have a lot of question marks attach to her and a pretty good post position for the Saratoga Race Track bias… She is a one-speed horse though and there will be a lot of competition for the lead… The odds are pretty interesting, but the pace aspect makes me doubt.

Number 8, RUBY NOTION has not won in stakes company for about 3 years and her 2-years-old campaign. Since then, she won allowance races and did ok in stakes of today’s level, but she seems pretty outmatched here. She is one of the patient ones in the group so maybe RUBY NOTION can run late and grab a minor place but even that is unlikely in my opinion.

Number 9, CHANTELINE has a stake win to her credit at this very distance last year and since then she has hit 50% of the time, mostly on the dirt. CHANTELINE knows how to press the pace and in today’s race, I think that it is the right pace style. She has beaten one of today’s favorites last year so maybe she does have the class for this race, or at least a better chance than what the morning line odds setter of Saratoga thinks. At 15-1 odds, CHANTELINE has her place in the exotic tickets.

Number 10, TILLIE’S LILY is undefeated in a light career and makes her first try in the stakes category. She has been racing to the front in almost all of her races and today will not have such an easy time getting there. The tremendous workouts are a good sign, but the pace is going to be hard and she faces some classy fillies here. Not impossible but I suspect that her odds will drop and that the pace scenario will make her day difficult.

Number 11, BRIELLE’S APPEAL is yet another speed early horse and she also faced little pace opposition when she won her races. She is coming up in class and will be challenged for the lead so I think that it will be a hard day for BRIELLE’S APPEAL. It is better to pass on her today in my view if she gets into the race.

Number 12, BOWIE has a versatile style which can be very useful with today’s pace scenario. She is jumping up in class pretty drastically however and does not have strong workouts to really say that she is a changed horse… If she does take part in the race, I think it is still better to pass and bet on classier horses…

Number 13, KIRBY’S PENNY is entered for the Main Track only. It is likely going to rain today, and I hope that the race runs on the turf still. If it does not, all the analysis is out of the window so scrap it if KIRBY’S PENNY gets in the race…

It is a hard race to truly narrow down but using pace handicapping and racing class handicapping, one can find a few horses with a decent shot at a good price.

Today, I think that the very hot pace is going to make winning hard for the early goers and I expect the podium to be earned by come-from-behind horses.

MORTICIA has the class to win it and the signals are all positive. She is going to be on the inside, saving ground, but that might make the escape difficult and if she does not have the racing room, she might fall short. Still, on paper she has what it takes.

FIRE KEY fell short in her last race, but it was probably just a warmup for this one. The angles are good and she has the class for this one so, given likely good odds, she should be part of the selection.

CHANTELINE has the right running style for this pace scenario and an outside post position which is a plus at the Saratoga Race Track.