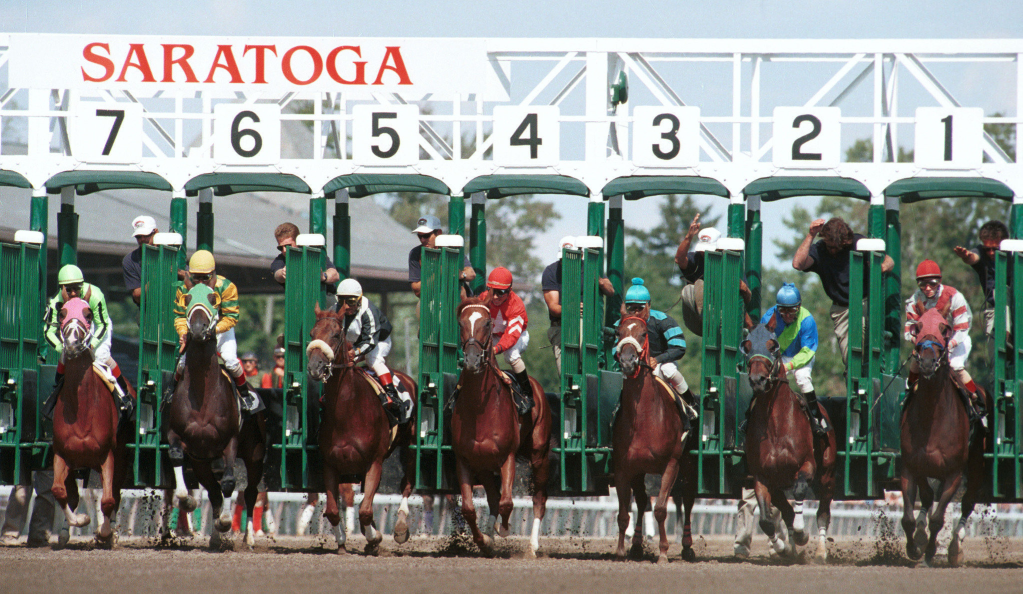 The main race of July 22 at the Saratoga race track is a Grade 1 stakes for three years old fillies. This is a short field, uncommon at Saratoga, but maybe it can be explained by the fact that two of the horses competing seem hard to beat… Maybe the clever trainers have decided to place their stock in easier races.

Despite the small field, it should be another exciting race of the great Saratoga 2018 meet or at least a chance to see a dominating filly continuing a great career.

The likely favorite, MONOMOY GIRL, will probably go straight for the lead. Can the second-choice price MINIGHT BISOU catch her in the stretch? Can a horse surprise at longer odds, at least for a place?

In the 9th race at the Saratoga Race Track on July 22 2018, the field notes are as follow:

Number 1, CHOCOLATE MARTINI tried her luck in sunny California after starting her career in the south. It will be her first time on this distance and class but she has won a grade two race earlier this year on just shorter. CHOCOLATE MARTINI failed in her last race at short odds and did not have much of an excuse, even if the pace was maybe too slow to give her an easy chance with the come from behind style. The trainer knows his job and the good workouts on shorter distances mean that maybe she will stay closer to the action this time. It seems a bit hard today however based on class and the opposition.

Number 2 MIDNIGHT BISOU comes off a solid win at Belmont Park last month where she dominated a short field. She was able to stay close to the tepid pace and just drive away in the final furlong. Before that, she faced, and lost to, today’s favorite Monomoy Girl in the Kentucky Oaks where she closed very hard after a little bit of traffic trouble at the start and in the last furlong. MIDNIGHT BISOU might have the edge over Monomoy Girl on a sloppy track but without that she would have to perform a few lengths better than her usual. There is not much reason to think that she can really pull that off today if the track stays fast. She is very likely to finish second again but at short odds, having her on a place bet or exotic bets might not offer much value.

Number 3, ESKIMO KISSES ran on the inside all the way in the Kentucky Oaks and had a relatively easy trip but was not able to come close to Monomoy Girl who won the race. Before that, ESKIMO KISSES finished twice behind the likely favorites of today, so it seems that they have the best of her. She also has never won at the Graded Stakes level, so class wise she seems beaten. ESKIMO KISSES was given a bit of vacation since the last start and shows some good workouts so could she have progressed enough to hope beating her foes this time? On an off track she might perform better so look out for the rain but on a sunny day, her chances are not great for the win. A place however, why not? Especially since a successful Saratoga Jockey will be on board.

Number 4, MONOMOY GIRL has lost only one race in her career, when she was fighting all the way for the lead. Even then, she still was beaten only by a neck. Today, she is likely going to have an easier time on the lead, with no one really up to challenge in the early goings. The workouts are strong, the speed figures and pace profile are above the rest and she has beaten all the main opponents of today in the past. MONOMOY GIRL has three straight Grade 1 stake wins in a row and a fourth one is very likely today…

Number 5 GIO GAME has shown fast early fractions in her career so there is a chance she could try to go along with Monomoy Girl in the early stages of this race. A couple of fast workouts in four furlongs show that she has some punch, but she was well beaten in her last attempt against today’s favorite. Having never won a Graded Stake race it looks difficult class-wise and the speed figures are also challenging. If her jockey tries for the lead, there is a chance that he spoils the race for Monomoy Girl but even it that case, GIO GAME should tire alongside her. I see her out of the places in all race scenarios.

MONOMOY GIRL sure looks hard to beat today… Her only loss was at 2 years old and today’s opponents do not seem likely to be putting much pressure early, therefore a wire to wire win is in the cards for this classy filly

Should the track be sloppy, we might see a surprise as MONOMOY GIRL is unproven on the surface but, overall, she seems a head above the rest, so she might even win it if the Saratoga race track turns muddy…

The main threat will come from the good filly MIDNIGHT BISOU but despite a strong win last out, the task looks arduous for her today and I am not sure that the odds will warrant a bet on her.

I will probably root for MONOMOY GIRL and hope that a longer odds horse like ESKIMO KISSES can spice up the Exacta bet.