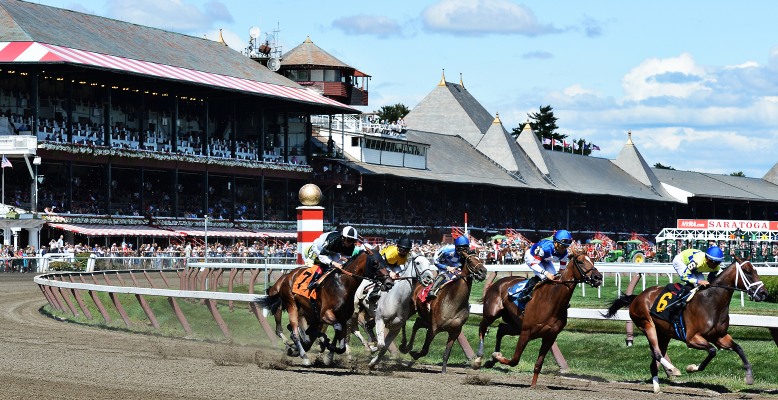 We have 61 stakes races on the calendar and it starts today with an ungraded stake for two years old fillies.

This is a good group of horses with some who have already tried the stakes level and others who will make their first start since a win.

As with all juvenile races, some leap of faith will be necessary but there are a couple of horses who stand out from this field and those should go out at interesting odds.

Number 1, CATHERINETHEGREAT scored the best speed figure of the group in her Maiden win at a decent prize level last month. The victory was on a sloppy track, so it looks like a rainy day at Saratoga Springs might make the job of CATHERINETHEGREAT easier. She won after a pretty easy trip but seemed to try to kickout her jockey and act rebellious which is a bad sign for a young horse. CATHERINETHEGREAT is from a young sire but with an amazing progeny who won 43% of their 2-year-old starts. Her dam had success with her daughters so far, so the pedigree is strong. A lot of people will love CATHERINETHEGREAT but I don’t like the rebellious nature and the likely low odds and the inside post at the Saratoga race track does not help… I think it is a good idea to bet against that favorite today.

Number 2 NONNA MADELINE works for one of the best trainers in the business and he knows how to repeat a winning performance. One could wish that NONNA MADELINE had won her Maiden in better company and a better time though… She comes from a pretty good sire with good results in stakes. The dam produced another good daughter who won good juvenile races so there are things to like in her pedigree. The morning line odds are not good enough to bet on that though, considering the question marks on class and the perilous inside post position.

Number 3, CONGRATS GAL comes from a decent sire and ok dam, but it is not the most impressive pedigree. She won in hand last time after gaining an easy lead and was able to finish in a relatively poor time without being approached by her rivals. It might be harder to get the lead this time though and it remains to be seen if CONGRATS GAL has the grit needed to battle the pace and come out victorious. The workout lines are impressive, and the trainer knows how to win stakes with young horses so CONGRATS GAL might be a threat at interesting odds.

Number 4, FIGHTRESS had trouble starting her first race and that’s a bit of a concern though maybe her young trainer has done wonders in between races? There is not a lot of data on him so it is hard to tell but FIGHTRESS has at least two great workouts to show since the maiden win. Her sire is not so great with 2 years old horses but the dam has had a good race record and so far has produced only winners… The dam’s progeny definitely has a winning spirit but none has really competed at the highest echelons yet so the class is in question. FIGHTRESS won on the sloppy track so a wet day at Saratoga might help her. The odds are likely to be good so maybe having her in exotic bets is not a bad idea.

Number 5 LONELY ROAD had to come down one class echelon to win her first race and did it in a relatively slow time. LONELY ROAD could have been helped by the Belmont Park track bias in that win but the come from behind style might come in handy today… LONELY ROAD is from a very good sire for young horses, proven at stakes level. This is the first foal of her dam, who had an ok racing career but comes from a good family. Her trainer is not known for success on dirt sprint with young horses but he is clever and maybe saw a spot based on likely pace. For a place, why not, the odds should be good.

Number 6, TAPPING PEARL had an easy race on the lead, with an easy pace, so one can assume the race will be more difficult today. TAPPING PEARL has a really good sire, proven at stakes level and her dam produced two high quality foals but they were out of another sire and bloodline. Outside of these two, the pedigree record is not as good… It is not impossible for TAPPING PEARL but considering the pace scenario and the question marks, it is probably better to bet on others today.

Number 7, SERENGETI EMPRESS won her maiden 2 weeks ago in a decent time but that was at a relatively low class level to be competing in a graded stakes right after. SERENGETI EXPRESS does not have the most impressive pedigree but has a talented trainer so maybe she has progressed since the last start. The class is a question mark but she has her place on the exotic bets if the odds go up a bit.

Number 8, EYEINTHESKY is making a second try at the stakes class level after a near miss the last time. Class-wise, that’s good but the time was not impressive. She came third after her opponent of today Lady Apple but EYEINTHESKY actually had the easier trip, working the outside track of Belmont Park. The pedigree is ok, with a decent sire but unproven dam. With a favorable trip last time that did not impress and weak workouts leading to today, I think it is best to pass on EYEINTHESKY.

Number 9, LADY APPLE also took part in a stakes race last month and came a close second after fighting against the Belmont Park track bias all the way. LADY APPLE also courageously ran on the rail in a tight spot so she looks like a weathered veteran already. A good race considering the hard trip. She is starting outside today which is generally better on the Saratoga race track. She has a good pedigree, coming out of a decent sire and a dam who produced a handful of quality siblings. LADY APPLE has not yet won a race and that is likely to turn away many bettors. It is a gamble, but I think that LADY APPLE can break her maiden at very good odds today.

Number 10, BLAME THE FROG went into two pace battles in the last two races and emerged victorious in the last one in decent times. The pace was not too spicy though, so the question is whether she can even be in the mix in the early stages today. The pedigree is not bad: the sire has good results with 2yo and the dam ran well but there are no other siblings to look at. The trainer does not have the best success with 2 years old. Young horses can surprise but BLAME THE FROG winning today would surprise indeed.

The first stakes race of the Saratoga 2018 meet is not the easiest to see through. A race for juveniles is rarely easy anyway.

Everyone has questions to answer and that includes the two likely favourites. Not only do they have imperfect profiles on paper, they draw the inside post positions which is not a plus at the Saratoga Race Track.

Today, I think it is better to take a gamble on the only horse who has not yet won a race, LADY APPLE. She has shown a lot of grit in her last race and the odds on a non-winner should be very interesting.

LONELY ROAD should benefit from a hot pace as she can come from behind and today she can also surprise in the stretch at juicy odds.