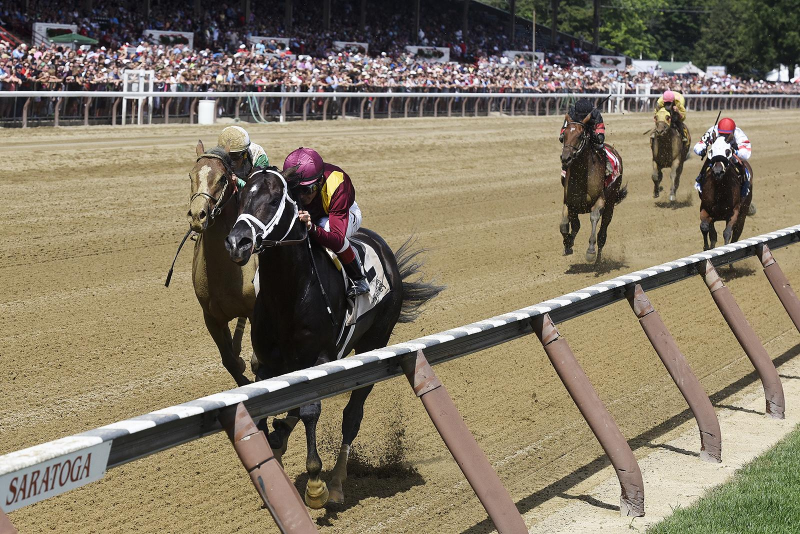 The short field of 5 horses contains 5 possible winners, though the morning line odds favorite probably has the best chance.

There is a bit of early speed and I expect that the winner will come from just behind the leaders in the stretch.

The favorite can be right there but so can the longest shot in the race, to spice up the exotic bets.

Number 1, REALM is the only horse who won his last race and he did it coming from just behind the leaders which might be the right strategy today. It was a lower class race however and REALM has never won at today’s class level. At three years of age, he did race in graded stakes company but since then has not been faring so well in easier company. REALM shows some hot workouts leading to today so maybe he retained his form and can surprise at interesting odds. He will need the best race of his life to win it though.

Number 2 OUTPLAY has disappointed his numerous backers in two separate Grade 2 attempts of late but was given a couple of months break and seems to have trained nicely in the interim. OUTPLAY won a stakes race of similar caliber and distance last year right here at Saratoga and maybe the races he was entered into so far in 2018 were not the best fit, distance or class-wise. OUTPLAY works for a world-class trainer and one of the best jockeys at Saratoga is riding him. He will likely try to go wire to wire but that is probably not going to be the right strategy today with a pretty hot pace expected.

Number 3, TIMELINE will likely go out as the favorite and has a lot to offer, especially on a wet track. The track starts muddy today at Saratoga but the weather is forecast to be good so it might dry out by the time of the 10th race. Even in that setting, TIMELINE has a good chance and his versatility makes him a threat either way the jockey is going to ride him. The trainer is having a great season so far at Saratoga and, as a multiple Grade 3 races winner last year, TIMELINE looks to be in the right category to win.

Number 4, KURILOV comes down a few notches in class and switches back to dirt for this one. Also working for Chad Brown, one of the hottest trainers at Saratoga in 2018, and showing decent workouts, we can expect KURILOV to be impressive today. He was racing on dirt and doing great for most of his career and he likes wet surfaces apparently. KURILOV is probably going to press the pace and be in a good position to strike in the stretch. He should be able to grab a place unless it turns out that he hates the Saratoga racetrack on his first try here.

Number 5 PATCH finished a mile behind the winners in his most recent Grade 1 attempt at this distance but today’s race figures to be much easier, class-wise. In this short field, PATCH might not get the ideal pace scenario though, as he tends to come from way behind. PATCH is unproven on a wet track and has failed a few times on the distance, so I am not certain that he is going to like it today. Moreover, as a horse who took part in triple crown races last year, and as one who works for the best trainer in the business, I think that PATCH will be overbet and there is value in betting against him today.

It is a short field packed with quality horses the morning line odds favorite appears to be in an ideal situation.

TIMELINE works for a hot trainer and has the class to win it. With a versatile pace style, he figures to be a major threat today at decent odds.

The biggest longshot in the race, REALM, is the only one with a win in the last race and used to race decently at the stakes level. If he retained his form and can make use of the good post position, he can grab a place at very interesting odds.

KURILOV makes a return to dirt for an in-form trainer and should be in an ideal position to strike in the stretch.