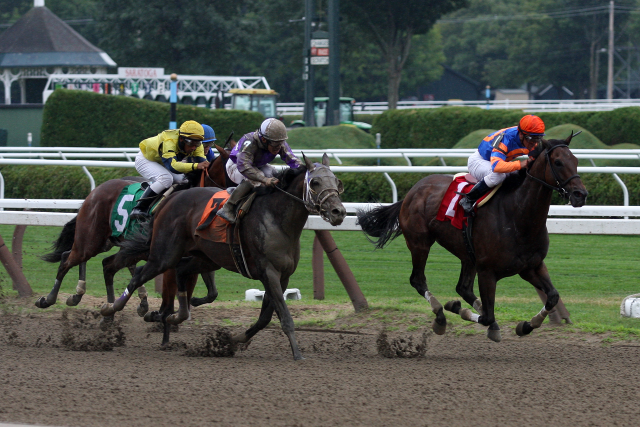 A very competitive field takes the stage in the 7 furlongs Balerina Stakes at Saratoga. With multiple distance specialists and Graded Stakes winners, it is one of the most balanced group of horses in a while.

Pace handicapping will play a huge role in the selection as the position of horses at the various calls of the race and how fast they are going in the early stages will have a tremendous impact on the end result.

Number 1, TEQUILITA has won a couple of Graded Stake races on this distance last year but has had more trouble in 2018, with no win in her column. That dry spell is of concern as TEQUILITA has been racing in easier company… She might be sharper today based on her excellent workout but she has a long way to go to be competitive against this field considering that she never came close to the speed figures she would need to win it today. Add to that a poor post position and a history of failure at Saratoga and you have an easy pass, on paper at least.

Number 2 IVY BELL comes off three failures at this or lower class level but maybe there were some excuses. She tried longer distances and, before that, ran in the rain which might not have been her style. Today, IVY BELL comes back to 7 furlongs, where she has done well in the past, including a Grade 2 stakes win in the spring. A Grade 1 is much harder to win than a Grade 2 race though and, before that win, IVY BELL was crushing it in training which she did not do for this one. IVY BELL needs to progress quite a bit to top this field and her running style and post position will probably not help. It is not impossible for her, but it looks hard to me.

Number 3, STILL THERE won an ungraded stakes race on this distance a month ago and did it in a respectable time. She makes a big jump going straight to a Grade 1 though and will need to progress further to have a chance. STILL THERE should manage to stay very close to the leader and that can certainly help in the stretch but given her race record, it still looks difficult to beat some very classy horses. STILL THERE has a place on the podium but top spot, I don’t think so.

Number 4, CAIRENN’s last win came in an optional claiming race, on a shorter distance. That’s multiple class levels below and since, she tried ungraded stakes and a Grade 3 and failed every time, though she managed to place a few times. CAIRENN runs like clockwork at a speed level well under what is needed today, and I doubt that her trainer can have made her improve dramatically in the last month… I think it is best to pass on CAIRENN today.

Number 5 FINLEY’SLUCKYCHARM is a Grade 1 and Grade 2 winner with a killer record. She won a Grade 2 right here at Saratoga last month after a bit of a layoff and maybe the second race will be even better. Her speed figure last out was pretty impressive, and a repeat would be enough to win today. FINLEY’SLUCKYCHARM has early speed and there is little of that in this race. She should be able to get the lead and set some easy fractions. Even if she can’t grab the lead, the good news is that FINLEY’SLUCKYCHARM has a pretty versatile style and can come from slightly behind. FINLEY’SLUCKYCHARM starts from a middle post position and that’s a positive on the Saratoga racetrack. Another positive point is the form of the trainer who won two races this week already and her most recent workout which hints that FINLEY’SLUCKYCHARM is ready for a repeat. Based on the pace profile and class, I think that she is the one to beat.

Number 6, LEWIS BAY last ran in June so that’s close to a three months break for the mare which is not necessarily a bad sign considering that she has run well fresh in the past. The workouts since the last race are pretty good and she works for the most successful trainer of the season at Saratoga. In the last race, LEWIS BAY beat a few of today’s opponents soundly but it was a small field and an easier class. Earlier in the year, she faced and lost to Finley’sluckycharm against whom she races again today. It was a very narrow loss but LEWIS BAY saved ground throughout and did not have too bad a trip, so I think that is was a fair beat. It is going to be close, but I think that LEWIS BAY will be second best today again though she carries less weight. The pace factor gives an advantage to horses on the lead and I don’t think that LEWIS BAY will be able to run her starting gate neighbour down.

Number 7, MARLEY’S FREEDOM will try to stretch her winning streak but stretches the distance too and that has not been very successful for her so far. She tried the distance 3 times over the winter and spring and failed hard every time. This time, she extended her workout distances and ran very well so maybe she is finally ready to win on the longer distance? MARLEY’S FREEDOM works for one of the top trainers in the world and he is having a good week at Saratoga so the barn seems ready to strike. Still, the distance is a concern and MARLEY’S FREEDOM usually stays behind the lead to strike late and there might not be enough pace for her to be successful with this strategy. MARLEY’S FREEDOM is one of the favorites and definitely a major threat but with this much uncertainty, I think that there is value in betting against her.

Number 8, UNION STRIKE has not won a race in over a year, but she has not run much either, which is another worrying element. She missed by a lot in her last three starts but tried longer distances and the synthetic surface. There might be some explanations to the losses but still, it is not looking good. Her most impressive win came when she was two years old and since then she only won in ungraded stakes company. Her speed figures have never been close to what she needs to win today and UNION STRIKE usually comes from pretty far behind which should not be the right pace style today.

Number 9, HIGHWAY STAR burned the racetrack up last week with an amazing workout and the previous one was not too bad either. It looks like she is progressing for this race and will come in very sharp. The problem is that HIGHWAY STAR best results so far in her career are pretty far from what she needs to win today. She came in a close second in this race last year and won her next one, a Grade 2, but since then it has been almost a year of failures at lower class levels. In her last race she was soundly beaten by Lewis Bay whom she faces again today and that was over two months ago. HIGHWAY STAR loves this distance and the workout is impressive, but I don’t think that it will be enough to turn the tables on Lewis Bay and there are other big threats to beat anyway.

It is a very hard race to handicap considering the high quality of basically every horse in it. The three favorites all have tremendous qualities and the horses of lesser stature are still pretty good.

In this case, the pace is the most important element and at this game FINLEY’SLUCKYCHARM figures to have the upper hand. There is little early speed in the race and she starts from the best gate to go to the lead and try to keep it all the way.

The horse next to her, LEWIS BAY, did not run in the last 2+ months but she still seems mightily capable of winning, especially if there is some pressure on the race leader. The weight carried is not a major factor in dirt racing but she does get a big load off here and she will probably come close to winning again.

MARLEY’S FREEDOM is awarded the shortest odds by the morning line handicapper and I think that it is a bit optimist even though she has an impressive background. MARLEY’S FREEDOM needs to stretch distance and there should not be enough early pace to help her with this endeavour