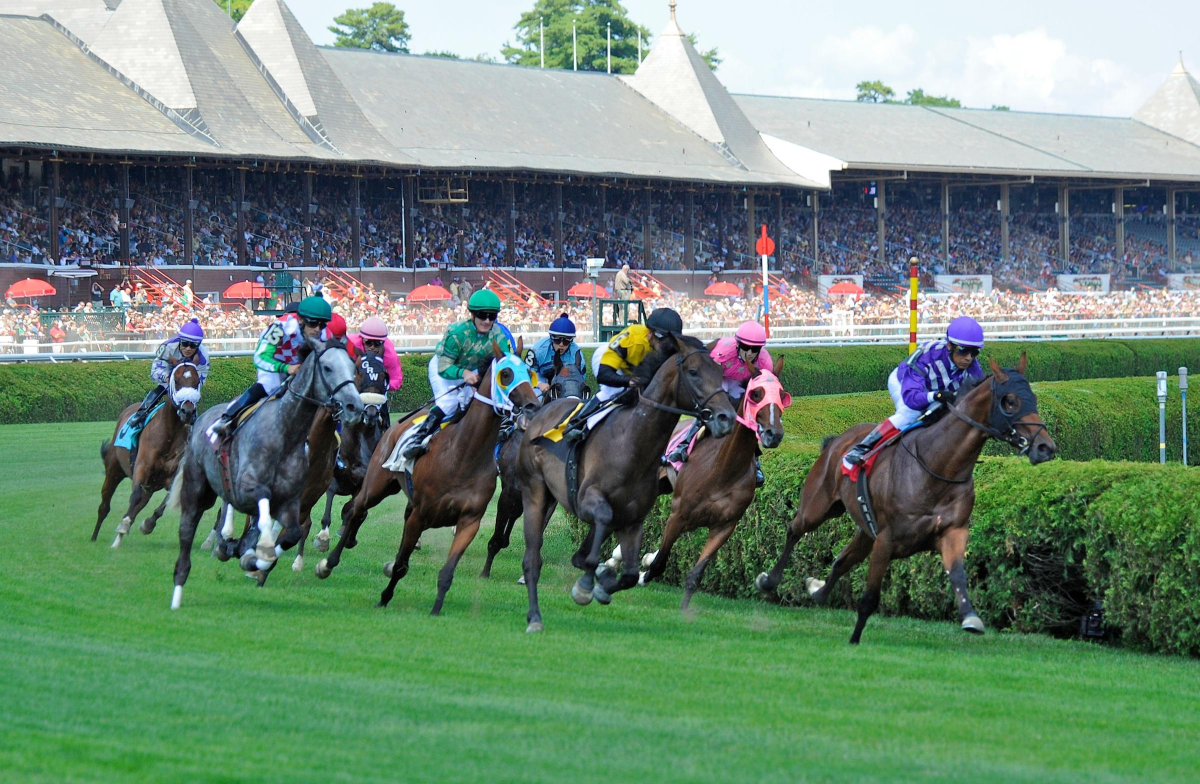 The 5th leg of the Saratoga Pick 6 is another highly competitive race, this time a long route on the inner turf.

It looks like there should be some sparks early and a hot pace. This should make the life of horses who like to come from behind easier.

Problem for the betting public: there are many of those… It is hard to pick them apart but a few stand out.

Number 1, GLORIOUS EMPIRE is one of a few horses who will likely try to go for the lead and he probably has the best shot at it, being on the rail. Last month, GLORIOUS EMPIRE ran on this same Saratoga racecourse and managed to grab a clear lead, starting from the outside, and went on to win his first graded stakes race in a deadheat. Today is a step up and one should note that a year ago GLORIOUS EMPIRE was running in claiming company… The class is in doubt and today GLORIOUS EMPIRE should get some pace pressure, so I think that he will end up being overtaken in the stretch.

Number 2 SPRING QUALITY won his last race against a bunch of today’s opposition. He came from way behind but had a ground saving trip almost throughout so that takes a bit away from him, though of course a Grade 1 win is a Grade 1 win. Before that win, SPRING QUALITY did ok in a couple of Grade 3 races, including one just 100 yards shorter so the distance should be OK. He has some class, but it is not a dominating horse in this field. His trainer is in form and we can guess that the vacation he gave the horse was useful and that SPRING QUALITY is coming back at his best. Given the pace scenario and the post position, SPRING QUALITY has a chance but there is some strong opposition…

Number 3, FUNTASTIC last raced almost two months ago and went wire to wire in a Grade 1 just a bit shorter than today’s race. He was almost caught in that one despite not having had to exert too much energy in the early stages, so the distance today is a bit of a concern even if he won a much easier class race on this distance in May. The workouts are not necessarily as good as we would hope but FUNTASTIC works for a trainer in great form so that balances out. I think that the race today will start hard and that FUNTASTIC will get enough pace pressure to eventually collapse.

Number 4, HI HAPPY will face some of today’s opponents once again and will hope to turn the tables on them. It is not impossible, but it does look like an uphill battle considering that HI HAPPY is happier on the lead and today it should be hard to get it. HI HAPPY can go the distance and he has won a race of similar caliber earlier this year. The last outing, right here at Saratoga was a major disappointment however. The soft going could have been to blame but I am not sure considering that HI HAPPY has done well on soft ground before. The workouts are dull and I believe that HI HAPPY will once again figure in the early stages but disappoint in the end.

Number 5 HIGHLAND SKY steps up in class bigly, going from an unquestionable beating in a Grade 2 stakes to a highly competitive Grade 1. HIGHLAND SKY has been running in easier company all his life and has not dominated these races though he has a been doing pretty well this year. HIGHLAND SKY can come from far behind and that should be the right pace style today, but he is a few class levels below the rest and I don’t see him prevailing today.

Number 6, BIGGER PICTURE last won over 6 months ago, but it was at this distance and in a Graded stakes race. After that however, he has not impressed too much, though he has come relatively close in his last two tries, including the last race where he ran on the outside all the way. Of note is the fact that one of the top turf jockeys in Saratoga elects to ride this one and I am sure that he had his choice of rides. The most recent workout is strong by the way, so it looks like BIGGER PICTURE is ready to go. Will fitness be enough against this crowd though? BIGGER PICTURE has the right running style and can win it but I would not take too short odds on that.

Number 7, CHANNEL MAKER is the one who caught Glorious Empire on the wire to deadheat in their last race. It was a ground saving trip almost throughout, so CHANNEL MAKER might have had a bit of advantage against some of the opposition that day, but it was still a pretty good effort. Previous races were a bit more laborious however and it was only the first time that CHANNEL MAKER won in Graded stakes company. The pace scenario should be helpful to a horse like CHANNEL MAKER and he has a distinct chance, I am just not sure about the price.

Number 8, SEAHENGE is the youngest horse in the field which is not a plus. At 3 years of age, his physique should still be weaker than those of the older males. SEAHENGE goes back to the turf for this one and it might be a good idea considering his UK roots and wins on the surface. Those were on shorter distances and against much weaker opposition however and it does not look like SEAHENGE really likes the new world. It feels pretty safe to pass on him today.

Number 9, REVVED UP has yet to win in 2018 and has yet to win a Graded stakes race. That being said, he beat out an eventual winner of Grade 3 stake in his last race and came pretty close to scoring after pressing the pace. Still, the class gap seems big against this field and REVVED UP is also going to run for longer than he is used to. He has done well at Saratoga in the past but these were much lower class races. As many in the field, REVVED UP can accelerate in the last stages so it is not impossible, but it looks more difficult for him than for others.

Number 10, SADLER’S JOY is trying for the 5th time in a row to win a Graded stakes race and he is faced again with opponents who had the best of him. SADLER’S JOY came insanely close the last 3 times so some might say that he is due. Others will say that he starts from a terrible post position against opponents who have had his number repeatedly and therefore there is little hope that he can turn it around… On the positive side, the distance is no problem and SADLER’S JOY has had great success at Saratoga in the past, including winning this very race last year. The pattern of races is eerily identical as last year by the way. Definitely possible considering that he has the right racing style, but the price will be short, and I am not sure I love his chances so much.

An extremely tough competition should take place in the early going and the race should play out in the last furlong with multiple horses able to get the prize.

I believe that SPRING QUALITY will have a good trip and save some energy to strike in the first in the stretch and win it but there is no doubt others will try the same.

SADLER’S JOY will try to finally beat this crowd and there is no doubt that he is a classy horse who feels at home at Saratoga. He has a major chance but will probably still finish second or worse.

BIGGER PICTURE appears to be in form and one of the best jockeys at Saratoga is onboard. He does not have the same chance as others, but the odds should be long enough to include him in the exotic bets at least.

CHANNEL MAKER ran down a few horses in the last race, but it was an easier trip than the one of BIGGER PICTURE. Still, the running style is good.