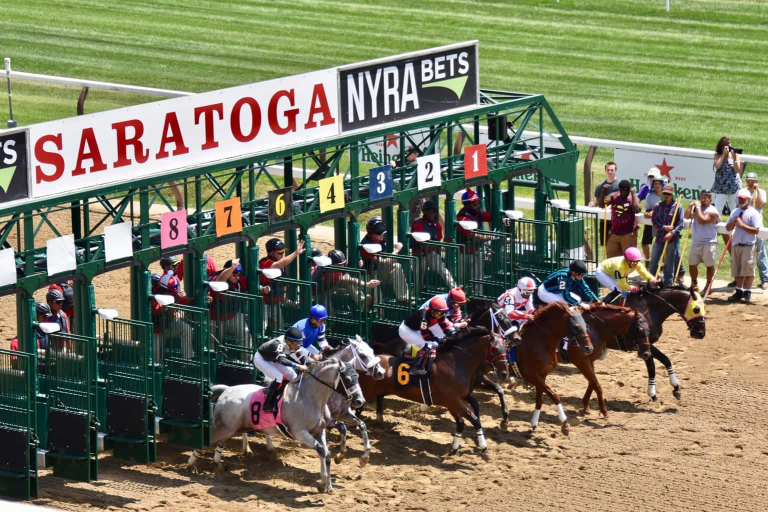 Three out of eight horses have been scratched off the race, so we are left once again with a short field at the Saratoga racetrack…

The weather is apparently dry and stable, and I expect a repeat of the recent track bias that tends to favour horses with early speed.

Considering that the favourites do not have that racing style and that some of the scratched horses had it, I think that it opens the door for a horse going wire to wire and a mild upset today.

Number 1, CONTROL GROUP draws the rail and has early speed, which has been an advantage recently at the Saratoga racetrack. CONTROL GROUP comes off a couple of wins in easier company, but he was doing very well in Stakes races last year so he must have the class for this one. He knows the distance and the track inside out and one of the best Saratoga jockeys is on board for the ride. CONTROL GROUP will need to be back at his top form to win today but with a possible track bias helping him out and the rail throughout, he has a major chance today and I like the morning line odds a lot.

Number 2 CAN YOU DIGGIT will try to break his curse and finally win a stakes race today… He has finished second twice this year, losing both races to some of today’s opponents. His trainer is doing well this week, so we can hope that CAN YOU DIGGIT will be at his best, but it is not sure that his best is enough against this tough field. CAN YOU DIGGIT does his best running in the front but today he probably will have some trouble getting the lead. He has won on the distance and placed multiple times at Saratoga, but I think that he is outmatched here and should do little more than make the pace a bit hotter.

Number 3, TWISTED TOM was the overwhelming favorite in his last outing against many of today’s opponents and he disappointed mightily despite an easy trip with no excuse. It was his first race in a long time though so maybe he will be sharper today. His trainer is having an amazing season at Saratoga so there is a good chance that TWISTED TOM is ready to strike. If he is, he might be able to get the best of this field, having defeated a few of them last year on the same Saratoga racetrack. The workouts look good but so did they before the last race and the trainer does not do much better on the second try after a layoff… Moreover, TWISTED TOM might be disadvantaged by the recent track bias as he likes to come from behind and today’s pace will likely favor speed horses. All in all, I think that TWISTED TOM would be a bad bet based on the last race and the profile.

Number 4, PAPA SHOT has been scratched.

Number 5 HIT IT ONCE MORE has been scratched.

Number 6, WINE NOT finished second to today’s opponent Pat on The Back in their last race and he was on the outside all the way and was not severely beaten. With the inside route this time maybe he can turn the tables on Pat on the Back but it is still an uphill battle against this field. WINE NOT has a come from behind style which should not be advantageous today. Moreover, he has not won in over a year and actually never won at this class level, at the distance or at Saratoga… The trainer makes a big equipment change today though and WINE NOT will run without blinkers for the first time. This is not going to help with early speed and make the job even more difficult I think. WINE NOT would have to improve a lot to win it today and I think that he will just not be a factor.

Number 7, PAT ON THE BACK won a stakes race last out after an easy trip so congratulations but I am not super impressed. He almost won the two races prior, still in stakes company, and always with honorable speed figures. I think that it will attract a lot of betting money, but I have my doubts about the chances of PAT ON THE BACK today, considering his running style and post position. There is little pace in the race and I expect that front runners will have the upper hand, so I don’t see PAT ON THE BACK winning and definitely don’t see value in betting at the likely very short odds. He is quite likely to be on the podium, but I think that he will miss the win at short odds and is a bet against today…

Number 8, WINSTON’S CHANCE has been scratched.

There is a single speed horse left in the race and he draws the rail which is pretty lucky for him and us.

I think that CONTROL GROUP has a good chance of going wire to wire in this one and should go off at interesting odds based on the speed figures and recent race records of the favourites.

PAT ON THE BACK will most likely grab second place but as the likely favorite I think that there is not a lot of value in including him on exotic tickets, it can only disappoint.

So today, it will be a straight, old-school, win bet on the only speed in the race, CONTROL GROUP and I will be hoping for a stable track bias to help him fly around the track.