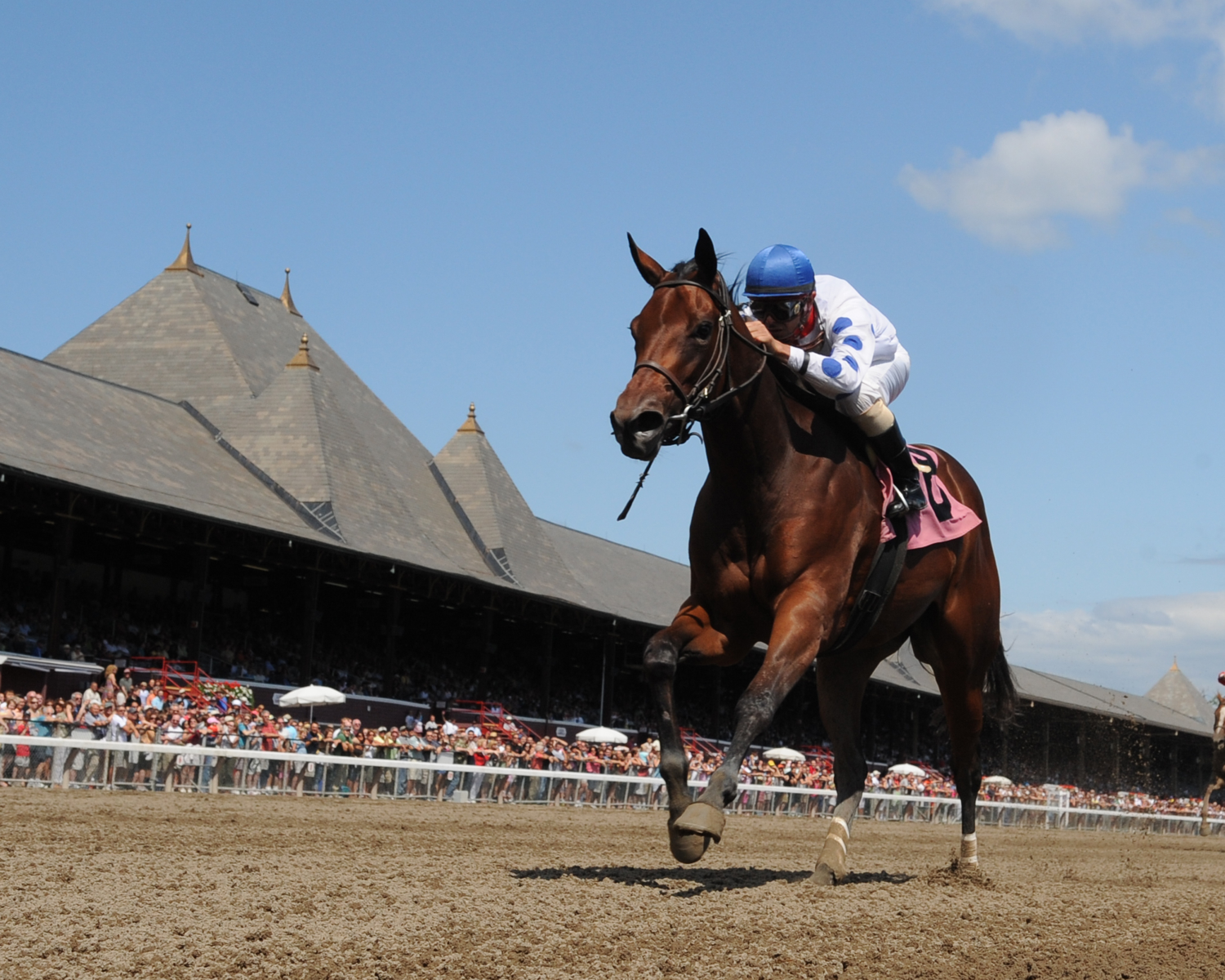 This restricted stakes race exclude any winner of a stakes so far this year so we are faced with multiple horses making a step up in class. A few have come close to winning in the class category recently and one foreigner actually won at higher class last year.

The distance is new for most but thankfully it looks like we will have a dry racetrack for once as there is no rain in the forecast. That could help everyone last a little longer.

We should see some early pace and that might make life difficult for the favorites so I expect a surprises down the stretch.

Number 1, AWESTRUCK has drawn the rail and has the early speed to make good use of it. We can expect her to lead them into the first turn and save ground throughout. Her jockey is no rookie at Saratoga and he will most likely be able to find the optimal route. AWESTRUCK is likely to get some pace pressure though, as there are other horses in the field with early speed. One should also note that the only other time that AWESTRUCK ran for so long she weakened in the stretch. Even on shorter distances she seemed to have had trouble finishing her races… AWESTRUCK probably is in the right class considering the near miss last month and a decent showing in a Grade 2 stakes but I think that she might weaken again and be out of first place on the wire, though maybe still in the Exacta or Trifecta.

Number 2 A PLACE TO SHINE only managed a 3rd place in her last outing a few months ago but one of the horses she beat went on to win a similar race and show nicely in a Grade 2. She was rested for a while and that has worked well in the past for her. She also shows hot workouts since the last race so there are signs that A PLACE TO SHINE is ready to go today. They enlisted a new jockey for this one and he is in form at Saratoga so that’s a relatively positive sign. A PLACE TO SHINE has some early speed and should be in the mix from the get go. The Saratoga track bias might play in her favour as she has the outside to the other speed horse and if so, it could help her last longer and go onto the podium at interesting odds.

Number 3, FOREVER LIESL has been running like clockwork, replicating the same level of performance in almost every race in the past year. Unfortunately, that level of performance would be nowhere near what is needed to win today. FOREVER LIESL has a couple of things going for her though: her hot trainer is having a good week at Saratoga so maybe the barn is hot, plus she has a versatile style that can see her take the lead or come from just behind. I don’t think that it will be enough for FOREVER LIESL to really explode though and she would need to progress a lot to have a chance. It is better to pass on her today.

Number 4, MOONLIT GARDEN barely missed the win in June at this same class level, posting a career best Beyer Speed figure which is also the field’s best. Overall, her 2018 season is going much better than 2017, as she was winless then. That gives her a rather poor win record but maybe she is finally coming onto her own? The trainer appears to be a little confused about her career path hpwever, as she has no published workouts on dirt recently and last trained on turf. It is possible that the connections wanted to try her back there and therefore it looks like this particular race is not their main target. MOONLIT GARDEN can show a lot of early speed and her rider today took her all the way in the lead the last time they worked together, therefore I suspect that they will try it again today. There is some pace opposition in this race so I am not sure how that would turn out though… The betting public will most likely fancy MOONLIT GARDEN a lot, based on the speed figure and near miss last out. I am not so sure that the morning line odds are justified however, and I think that there is value in betting against her today.

Number 5 NOMORERICHBLONDES leaves the UAE desert to come to the damp grey Saratoga Springs track and there is therefore a question on whether it will be too much of a cultural shock… There is also the major question of her readiness, after more than a year of vacation… The good news on both questions is that NOMORERICHBLONDES has been training well this year and has done so on the East Coast so she probably is used to wet weather by now. Moreover, her trainer knows how to get them ready after a long pause and knows how to dose Lasix. He is doing very well at Saratoga this week and maybe he can claim a third win in 8 tries. The class of NOMORERICHBLONDES towers above the competition as she won and placed in better company last year and she can go the distance. If she is healthy and in form, she can probably destroy this field…

For me, it all boils down to the level of fitness of NOMORERICHBLONDES. If she is coming back in form, she should dispose of this field easily. Based on her trainer’s talent and the workouts, I think that she might be. Considering that the betting public will probably let her go out at high odds, I am willing to bet on it.

The two morning line odds favorites have a decent chance on paper but there are enough dark spots to justify not betting on them at these likely short prices.

I think that another relative longshot has a better chance than what the morning line odds say: A PLACE TO SHINE. She will also be running after a layoff and that has worked well for her and her trainer before.

WIN BET at 3-1 or more on Number 5 NOMORERICHBLOOD