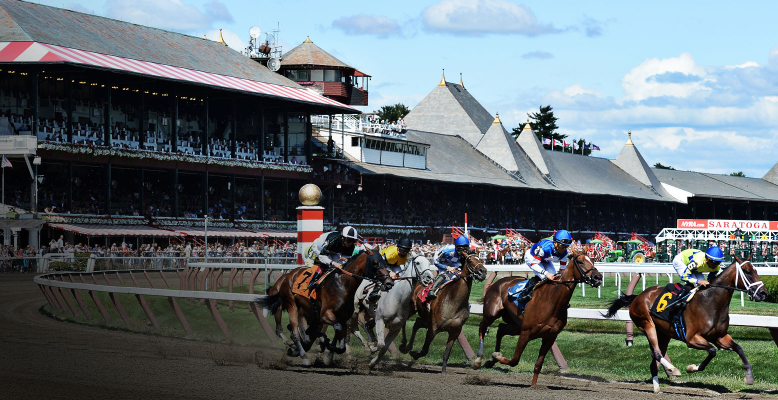 It is a short field of 5 horses who will take part in the Tale of the Cat stakes at the Saratoga Racetrack today, but with some class movement and question marks on fitness, it is a very open race, betting-wise.

The morning line odds favorite was given a 6 months break and that means that something was wrong with him, health wise. He comes back today at a class level he should manage but the workouts are not too impressive. Is he really back in shape?

There might be more value in picking a horse with proven recent form and who the betting public might disregard a bit. A mild upset in this short field is quite possible.

Number 1, MY BOY TATE is making a comeback at Saratoga after taking 6 months off and he can make it 5 wins in a row if he is healthy. MY BOY TATE can challenge for the lead if he wants to and knows how to come back from behind if he needs to. He has won at Saratoga last year, on this very distance so he should feel comfortable here. The bad news is that the published workouts are all pretty bad… We have seen better from MY BOY TATE in the past so it is worrying to see that he was not able to run fast in the morning before this race. It is not very easy to win on first asking after a vacation, especially one probably caused by health issues. Moreover, MY BOY TATE is facing serious opposition here. I think that he is a bet against, as the favorite, today.

Number 2 MR.CROW ran some amazing races at Saratoga last year, with dominating wire to wire wins in record times. Emboldened by this success, the connections tried graded stakes races and MR. CROW unfortunately did not fare so well in them. He got a place in a Grade 3 stakes two months ago and did not embarrass himself too much in a Grade 1 two weeks ago. He never repeated the massive speed figures of last year however and did not impress on pace figures either. Unless MR. CROW is a just a fan of the Saratoga Racecourse, I doubt that we will see the same domination as last year.

Number 3, SILVER RIDE will apparently try to stay right behind the pace, noting his last workout on 3 furlongs. He is a come from behind horse and on American sprint racing, that’s not usually the right pace style. Still, SILVER RIDE won a couple of sprints this way and as there is likely going to be a hot pace in this one today, maybe he can capitalize on it. SILVER RIDE is taking a step up in class for this one and will need a step up in performance too to beat this field. At 6 years old, it is not easy to imagine that he can progress immensely, so he will need a lot of racing luck to win today I think.

Number 5 ALWAYS SUNSHINE seems to have a new lease on life in 2018, having grabbed a podium and won at this class level. His year 2017 was a wash but in 2016 he was racing in good company and even won a Grade 3. It will be his first try at Saratoga and his hot jockey will also need to discover this course. A dirt sprint racetrack is not the hardest to figure out though so that should be ok. The outside post position is pretty good this year at Saratoga too so that’s a plus. ALWAYS SUNSHINE appears to be back in form and if his is not allergic to the track, he has a good chance at interesting odds against this field.

The morning line odds favorite is coming back from a long layoff and does not show a lot of form in the workouts so there is probably value in betting against him.

He faces some strong opposition too, including MR.CROW who was killing it at Saratoga last year and SILVER RIDE who should have some closing speed and comes off a good win.

But I believe that it is ALWAYS SUNSHINE who will be the main threat, and hopefully winner today. He seems to be back in form and has won at this class level last month. Moreover, he starts from a good post position as there might be a bit of Saratoga track bias. As the morning line odds third choice, I think that the odds should be interesting enough to bet on ALWAYS SUNSHINE to win it.