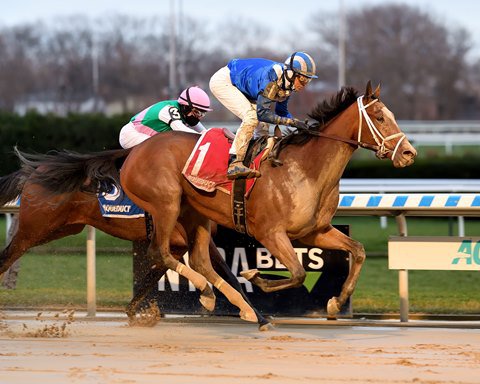 Saturday, July 24th will feature yet another Grade 1 event from Saratoga. Kentucky Oaks winner Malathaat looks to remain unbeaten in the CCA Oaks.

Television coverage of Saratoga is available via the Fox family of networks, check local listing for details.

As is the case throughout much of the Saratoga meet each year the question is will it rain and if so, how much? Coming into the weekend Friday afternoon’s card looks like it might have the potential for a brief hit of rain.

It is hard to know exactly how much the rain will impact the track and how long the moisture will remain in the grass and dirt. Based on the projected rainfall at this point it looks promising that NYRA should be able to run all races on their intended surfaces.

The race appears to have 3 strong win contenders is the #1 Giocare, #6 Ashaar, and #7 Regal Realm. Regal Realm is the favorite but has typically come from off the pace. The jury is still out on whether or not horses can win from there at Saratoga. #4 Breaking Stones is a front runner and potential live long shot.

This maiden special weight races features a number of lightly raced horses. Although the inner turf has often been kind to speed, that trend has not yet been supported in this year’s meeting. On paper the #3 So Enchanting, #8 Miss Bonnie T, and #9 Tracy Flick seem to have separation on the group, but it is worth watching the board to see if the “in-the-know” crowd at Saratoga has any inside information.

Look for horses not listed who are taking a lot of money or one of the picks who may be drifting up in odds. At Saratoga this can be a major indicator of how a horse is about to run and this appears to be a pretty wide open group.

#2 Win With Pride and #6 Strolling seem to fit this race perfectly. Their early run styles will put them in the best part of the racetrack and give them a chance to kick home. #5 Alcools should also be forwardly placed and will likely be in contention. If the pace gets hot up front #1 Universal Payday will likely be the closest of the late runners to get up.

Race 4 is a turf sprint that appears to the perfect spot for an upset. With the top 2 horses on the morning line drawing the 10 and 11 posts, it seems almost inevitable they will get stuck wide and have to be much the best to produce a winning effort. This opens the tote board for bettors to solid scores.

With being on or near the lead at such a premium in these races #3 Count Dawn looks like he could be in the right place at the right time. #4 Bardolino will be another one coming from the inside posts and looking for the early lead. #7 Vodka Lemonade is another player for front running position though he may get swung wide into the turn with so much other speed to his inside.

If speed doesn’t hold look for #5 Knockout Punch and #1 Clamor to come late and pump extra value into those exactas, trifectas, and superfectas.

If you can find a way around #1 Malathaat, you will burn a vast majority of the tickets in the pick 5 and pick 4. Horse racing is a funny game and horses lose when they’re not supposed to, especially at Saratoga. That being said the horse has had plenty of chances to stumble and has yet to do so. I won’t be clever here.

Race 6 bears a great resemblance to the 2nd race. While numbers in the past performances may tell one story, players should be aware of tote board movement and paddock behavior prior to the race to finalize decisions.

Breeding is often one of the greatest factors in these races at Saratoga. #3 Bourbon Heist boasts the top pedigree rating in the group and seems like great value at 10-1. With so little data separating the group, it is hard to differentiate between any of the runners. #2 Labarde comes into the race with an early running style and experience under his belt.

Other possible contenders include #6 Faith Runner at 20-1, #7 Watasha, and #4 Chileno

It is hard to get a read on pace in this race as there are very few that have shown the desire to be on the front end. #11 Space Launch comes in as the 7-2 favorite and makes the most sense in this spot. The concern is his late running style which could be hindered if a pace doesn’t materialize.

#7 Calibrate and #9 Munqad are interesting at 6-1 as they typically sit close to the front and may just end up on the front with no one contesting. #1 Performing Arts will get to save ground and will try to close late along with #6 Mira Mission.

While Malathaat is the most likely winner on the Saratoga card, my best bet of the day is the #1 Split Then Double in this race. The horses is a closing type, but this is typical on turf and as mentioned the inner course hasn’t been playing to speed the way it usually does.

#8 Flash Magic has early foot and has pace numbers early to win this race. Given the preference of early speed runners, she seems like a logical player here. After that I like a bit of a price in the #1 Glass Ceiling. The horse does need a bit of pace to run at and that is a concern based on early results, but at 12-1 it is worth the risk.

Other contenders in the race include race favorite #6 Caramel Swirl and #2 Makingcents.

In the Caress #2 Robin Sparkles will look to wire the field. She is the morning line favorite and an extremely likely winner. Keeping her company on the front end will be #1 Caravel and #6 Jakarta. If the pace disintegrates #5 Flower Point could spring an upset, but it seems unlikely here.

The #7 My Lips Are Sealed is the morning line favorite and the horse to beat in this spot. After that the horse directly to her outside #8 Choose Happiness seems a logical player to pick up the pieces of a hotly contested pace.

Given the amount of pace signed on #2 Emma and I and #5 Electric Youth have outside chances to come running late and spring the upset. If the race comes off of the turf #13 A Bit O’IrishSass would draw into the race and become a major player, though it seems unlikely that this race comes off.