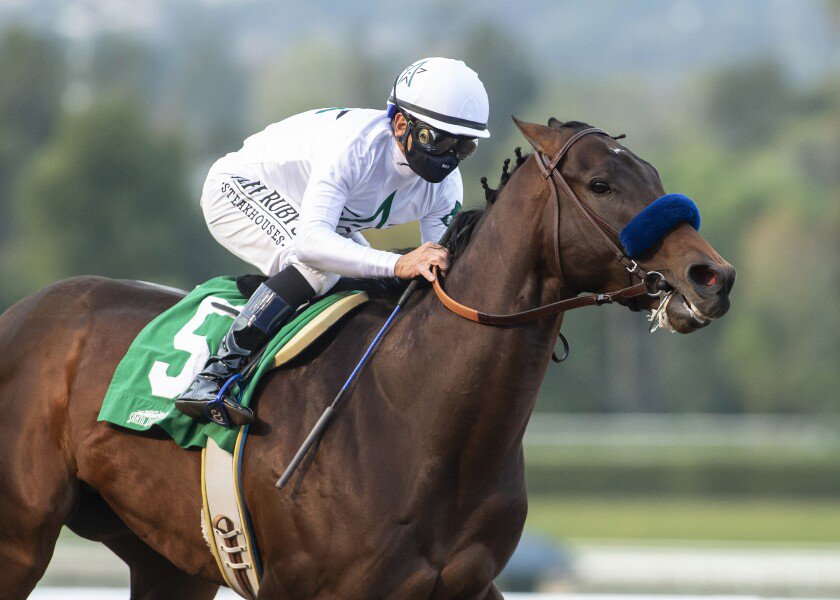 The Derby prep races will offer Kentucky Derby points to the top 4 finishers. These early preps often play a smaller role in who makes the gate on the first Saturday in May.

For this reason these points offer a relatively small amount of points. The winner will get 10. The next 3 finishers will receive 4, 2, and 1 point respectively.

Compared to races like the Rebel (50 pts to the winner) and the Arkansas Derby (100 points to the winner), these races will do little other than establish some early supremacy in the Derby picture.

One of the biggest reasons these races have not been very productive when it comes to producing Derby champions is the amount of time between them and the Derby. Keeping a horse in racing condition without interruption from January 1st and May 7th is no small task.

In 2021 the Sham Stakes from Santa Anita produced arguably the most talented horse in training today. Unfortunately, that talent didn’t get a chance to showcase itself in the Derby as Life is Good had to be taken off the Derby trail due to injury.

The 2022 Sham drew an underwhelming field. There are a couple of factors making this race additionally frustrating. First, is the fact that Santa Anita race course has been hit with a rare deluge of rain. The weather caused the course to cancel racing on Thursday. It is hard to know exactly how the track will recover from this type of pounding.

The second issues with this year’s event is that two of the five runners, and the two shortest prices on the morning line, are not eligible to receive the Derby points. This is due to Bob Baffert’s ban following the 2021 Medina Spirit positive drug overage.

I’m going to try and beat Baffert in this spot, though that has typically not been a wise way to go in these California prep races.

#1 MACKINNON (3-1) looks good based on speed figures and has the best in the money percentage at this mile distance. #4 ROCKEFELLER (8-5) is a Baffert runner so you know he’ll be ridden for speed early. #2 OVIATT CLASS (7-2) makes sense on speed figures and has run well against some good horses. I think this one could have a solid 2022. #3 NEWGRANGE (2-1) is the other Baffert who has to be considered.

The Jerome is the penultimate race from Aqueduct on Saturday.

My top selection is #8 HAGLER (4-1). The horse has tactical speed but could be on the front end early with no confirmed need the lead types. The track has played to these types all winter. After that one I like #1 COOKE CREEK (5-2) who will likely sit off the leaders and try to make a push late. #6 COURVOISIER (5-1) is another that should be near the lead and has to be respected based on connections. #7 MR. JEFFERSON (9-2) has run against some of the best to this point.

Oaklawn Park is known for upsets and this one looks like it could easily produce a surprise winner. Of the 14 entries my handicapping graded out over half of the field with A grades. Finding a winner here is no easy task.

When I’m struggling in a race I like to cover as many parts of the race flow as I can. That’s why my top pick will be #4 KAVOD (5-1). This one looks to be somewhere in the middle at the start. My feeling is that the pace will be hot and this one will come storming home as the class of the field. If the race is won on the front I think it goes through #2 ALL IN SYNC (8-1), but worry he’s a bit of cheap speed. As for a closer I’ll take the #12 COOL PAPPA G (6-1) who looks good on speed figures and may get the perfect pace setup. Rounding out my top 4 will be #10 BARBER ROAD (4-1) who gets the pick over #3 HOME BREW only because he is a point higher on the odds board.

#7 STREET HUMOR (4-1) will likely have the stamina to outlast these in the final jumps of the race. #5 LIBERTY FOREVER (5-2) should be competitive today based on the horse’s recent speed figures. #11 WHO’S CANDY (4-1) could get a perfect pace scenario today. #9 MAGNIFICENT RIDE (8-1) is worth a look as a long shot player.

#4 DISTORTED QUEEN (5-1) has a big shot here based on the breeding and the connections. #5 EVERYSTEPOFTHEWAY (7-2) should play a factor in this spot. #3 MANORELLI (7-2) has experience and good recent speed figures. #1 QUEEN OF THORNS (8-5) is a player, but the question will be in the price.

#4 SMUGGLER’S RUN (8-5) has some of the best breeding in the group. #3 AGADOR SPARTACUS (5-1) has the best speed figures and could get a perfect setup. #5 BILL BUCKNER (4-1) is another that should have the bloodlines to win at this level. #2 HEAVEN’S MUSIC (3-1) comes into the race signaling a big performance in the near future.

#9 TRICKLE IN (3-1) is a major player in today’s race edging the field in several key handicapping factors including speed & power rating. #2 INVINCIBELLA (7-2) is worth a look here based on the connections alone. #6 MAGICAL GRAY (8-1) should be an interesting player in this spot. #3 CHEAP CHEAP CHEAP (8-1) comes into the race signaling a big performance in the near future.

#1 MAD STEVEN (9-5) has a great shot in the race given the advantages in speed & stamina. #2 CURLY ESA (6-1) should be competitive based on the overall power rating which has it tops in the group. #3 ITS BIG (10-1) is a longshot who could pull the upset against this crew. #5 KING ROB (5-2) makes sense on paper, but the price may be too short to play this one.

#2 MUCHO UNUSUAL (5-2) looks to have to have kept the best company in the previous starts. #7 LUCK (8-5) should be competitive based on the overall power rating which has it tops in the group. #1 BODHICITTA (8-1) is a major player based on speed figures. #3 ENGLAND’S ROSE (5-1) is proven as a good bet to at least hit the board under today’s distance and surface conditions.

#6 AS TIME GOES BY (8-5) has an edge in speed and class and should be tough here. #1 MOONLIGHT D’ORO (3-1) could get the right setup in this spot. #5 PARK AVENUE (3-1) will be forward and that is definitely an advantage on the Santa Anita dirt. #2 COWBOYS DAUGHTER (10-1) is a long shot who is more likely to hit the board than win, but could provide some good value.

#4 ALIGATO (7-2) merits consideration in this spot given edges in speed & power rating. #11 PREACHING TRAINER (15-1) might be a steal at this price with some sneaky numbers in the past performances. #7 RIDING WITH DINO (4-1) will likely factor in the results of the race and could find the winner’s circle. #13 FIRST PREZ (8-1) looks to have to have kept the best company in the previous starts.

This weekend is packed full of races from across some of the premiere venues in American horse racing. Aqueduct, Santa Anita, Oaklawn Park, Fair Grounds, and Gulfstream will be among the many tracks running at various points throughout the weekend.

Betting News free handicapping tools can help you solidify your selections for all of the weekend’s races. With sophisticated machine learning, Betting News can help give you an edge on the other players in the pari-mutuel market.

Tonight, the most pivotal game of the 2022 NBA Eastern Conference finals takes place in Boston, with the Miami Heat taking a 2-1 series lead into their matchup with the Celtics. In Game 3 on Saturday, the Heat took control early, outscoring the Celtics 39-18 in the first quarter and leading by as many as END_OF_DOCUMENT_TOKEN_TO_BE_REPLACED