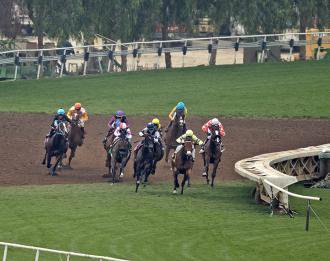 The course was first imagined up by track management back in the 1950s. The purpose of the downhill turf course was to give Santa Anita unique characteristics that would separate it from other major tracks in North America. The idea for a right turning, undulating turf course came from in depth studies of courses in Europe where these features are much more commonplace.

Santa Anita has one of the more unique configurations in American horse racing. Along with a standard 8 furlong oval dirt track, Santa Anita also includes a turf course which sits inside of the main course.

One addition that is not pictured in the image above is the new turf chute which is located in the infield of the turf course on the grandstand side. This chute allows for all turf routes to be contested on the main turf course.

One of the most beloved parts of the track for many horse players is the inclusion of the downhill turf course. As the diagram indicates the race starts in a chute before turning to the right. This is extremely unique since all other American thoroughbred racing is contested exclusively around left handed turns.

Another unique feature of the downhill turf is the fact that the start of the race takes place outside the perimeter of the main dirt track. However, the horses end the race at the turf finish line on the standard turf course. This leaves a gap where horses temporarily switch from turf to dirt and then quickly back to turf as they cross over into the stretch.

2019 was a bad year for California horse racing. Santa Anita suffered 37 horse fatalities alone. Out of an abundance of caution the California Horse Racing Board closed the downhill turf course and implemented a number of new safety measures to ensure the health and safety of the equine athletes.

Among the new changes are more stringent pre-race oversight measures. This includes, but is not limited to, getting permission from the track to work horses, extra veterinary oversight, and technology that is is used to check the track for consistency. The latter measure helps to reduce the likelihood that a horse takes a “bad step”. These stumbles can occasionally cause a horse to go down or can cause a trailing horse to clip heels as they run up on the runner who lost their momentum.

A full list of safety measures implemented by the Stronach Group, which owns Santa Anita among other tracks around the country, can be found on the Santa Anita website.

One of the reasons that was original given for closing the downhill turf course at Santa Anita was that horse deaths were about .5 per 1,000 starters higher on the course when compared to the main dirt track or the inside turf course.

Thorough investigation of this was evaluated to determine why this anomaly existed. Their were a number hypothesis thrown around, but based on Santa Anita’s announcement about the return of the course, they seem to be addressing 2 major possibilities.

First, the race will be used on a limited basis. One of the fears was that with horses running downhill they were coming down the hill with more speed or least less ability to pull up a horse that was going wrong.

Just like a human who can more easily stop running on a flat track, then on a hill, it was believed that as the course took wear and tear amplified this effect. Late in the season horses were more likely to hit an uneven patch on the course and take a bad step. With horses behind traveling downhill jockeys would have a harder time steering the horses momentum in an different direction to avoid a collision.

Now as Santa Anita prepares to use the course more sparingly it should allow for more monitoring and maintenance between races. In turn the hope is that the course will run more true throughout the entirety of the meet.

Another hypothesis for the courses higher fatalities was that a downhill, right turning course requiring an 80 foot surface switch and back again requires a lot of technical skill.

Not all horses are created equal. At tracks around the country a player can find top quality animals and bottom of the barrel claimers or maidens. While all of these horses are vital to the fabric of the game, they undoubtedly have varying levels of ability. Putting low level horses on this surface makes it more likely that they make a mistake that jeopardizes the rest of the field.

All reports at this time are that only stakes and select allowance races will be run over the course as it reopens. These tiers of racing represent the best horses on the grounds and should at least put the athletes in the best position to stay safe while navigating the new and difficult configuration.

The Santa Anita fall meet which will feature the return of the downhill turf course will run the entirety of October. Opening day is officially set for October 1st.

Following the fall meet, Santa Anita will resume racing on December 26th that will run into June 2022.