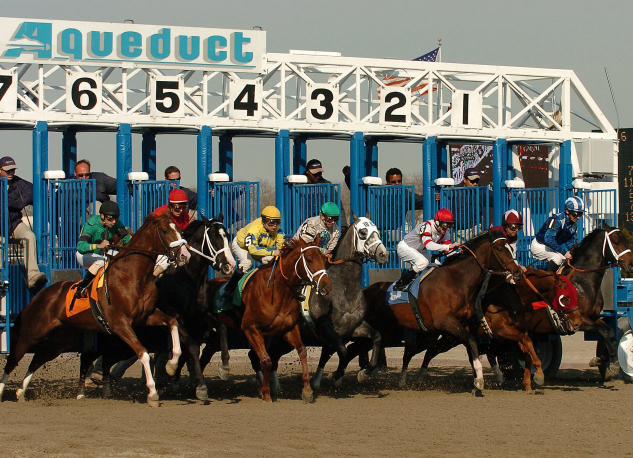 We have a juicy pick 6 carryover of over 260 000 at Aqueduct today, November 21, and this means a lot of value in the betting pool for those willing to take some risks.

As this is a midweek racing day in New York we have a tough lineup of low class races to handicap… It is a high risk high reward type of deal.

There are a couple of races where I think that there is a clear single selection but others where the field is a lot more competitive… Still, it the Pick 6 today is a great bet and with some luck it can be a nice payday before the holidays!

Race 4 is a Maiden Special Weight for juvenile horses run on the turf over 1 mile and 1/16. Turf routes are generally won coming from behind at Aqueduct but basic handicapping tenets tell us that horses with some racing experience have the upper hand over newcomers. We have a few horses with experience here,.

Among those the number 8 MALTHAEL who beat the speed figure par in his last race who finished second to a horse who went on to beat stakes company so he should be a strong contender here. The improved workout at the start of this month is a good sign too.

Number 3, SEISMIC WAVE fell short in his first try but he is well bred for this distance and has improved workouts

On the rail, number 1 DEMARCHELIER runs for the top barn of Chad Brown and has a strong turf lineage.

This race is a sprint scheduled to go on the turf and there is not a lot of early speed. This should advantage MRS. RAMONA G., the number 2, who has good tactical speed, is the only horse with a win in her last race and she is racing for a barn which is on fire right now. Unbeaten at this distance, if the race goes on turf as planned, we can single her here

It pays off to go down in class when we are talking about a Maiden Claiming race. At Aqueduct, having early speed generally pays off and only one horse ticks both boxes: number 7, OKEAMO. The horse also has experience at the distance and the winner of his last two races won again in decent time so there is quality in OKEAMO, this is also a single.

Another Maiden Special Weight scheduled for the turf but here all horses have previous experience. It is a very competitive field with many contenders.

Number 1a, ARGONNE, has actually won before but in a dead heat so he is eligible for the class again. Lucky for us as he has strong credentials. He is able to repeat and needs to be part of the ticket.

Number 2, CHANTRY FLATS fell just short in the last attempt and actually beat Argonne in the contest. He is the only horse with true early speed and a good post position to take advantage

Number 3 RHODE ISLAND had a difficult trip last out and still finished well. With a better trip on a more forgiving course, he has good chance today.

This race is a sprint on dirt and Aqueduct has a pretty strong track bias favoring early speed and the outside of the track. We have a lot of speedy horses in the race however and if the pace turns very hot that might advantage a come from behind horse. To add to the difficulty, the favorite is coming back from a 10 months layoff which followed a win so we must expect that he had a physical issue. Is he back in form? His trainer is a killer at bringing them back after a layoff and if he is fit, number 9 BELWITT is in perfect position to take advantage of a track bias so we must include him in the selection.

Number 7, STONEY BENNETT probably has the best speed in the field and a good post position to capitalize if the others are slow footed today. Just because of the track bias aspect, it is a good idea to include him in the tickets.

Number 3 BAVARADO should go out at long odds despite the fact that he is coming way down in class and runs for a team which is winning everything right now. It is a riskier bet but at these odds he can transform the payoff of the Pick 6.

Number 8, CERRETALTO won on the Aqueduct track at this class level at the start of the year and could catch them all in the stretch if the pace turns red hot.

Number 6 BENEVOLENCE has a good track record at Aqueduct and good late speed so could surprise them again if the pace is too hot for the pace leaders.

The last race of the Pick 6 has the largest field and we are looking at cheap claimers so unfortunately a surprise is very possible… This is a long race on the inner turf so being positioned on the inside could be an advantage. We can expect a pretty hot pace in the early goings and therefore the likely winner will come from behind in the stretch.

Number 1, MOBRIDGE had a bad race with little excuses last out (except the slow pace in front) but he loves the distance and can finish strong.

Number 9 WITH EXULTATION has not won a race this year but he had the time of his lif last year on this track and is another candidate to overtake them all in the stretch.

Number 11 MACAGONE will likely go out as the favorite on the back of his great track record at Aqueduct. He is also coming down in class and is a major threat

Also coming down in class but likely going to race at long odds is number 12 ODE TO THE HUNT. He has a terrible lifetime record but does better at Aqueduct and the recent workouts are quite encouraging.

Good luck to all the bold Pick 6 players!

Tonight’s NBA betting schedule is lacking in overly compelling matchups, but tonight’s action will also be taking place with a few notable names missing. Booker, Morant, and Lillard Sidelined Tonight and Beyond Booker Out Versus Pistons Due to Hamstring Injury The Phoenix Suns lost Devin Booker (hamstring) on Tuesday against Golden State but closed out END_OF_DOCUMENT_TOKEN_TO_BE_REPLACED