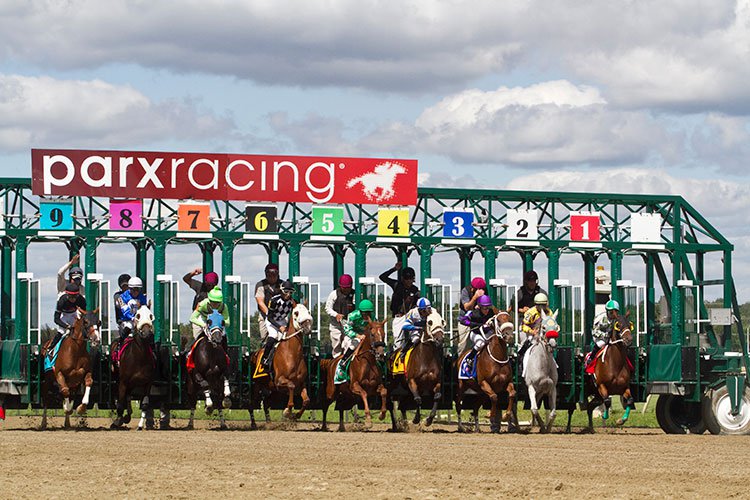 Derby fever will break until January 22 when the next round of Derby preps are carded. However, in the interim there is plenty of action for horseplayers including Tuesday at Parx Race Course.

Tuesday racing from Parx will include 10 races on the dirt. It is one of just 6 tracks running on Tuesday and likely to have the largest handle of them all.

There was a lot happening in the racing world this weekend. The main focus of many horseplayers was a series of 3 Kentucky Derby points races across the country. Each of the races offered 10 points to the winner. The next 3 places received 4,2, and 1 point respectively.

At Aqueduct this weekend two truisms persisted throughout the weekend. First was the need to be on or near the lead throughout the race. The second was that despite the moisture in the track the rail was the place to be.

Unsurprisingly the rail runner Cooke Creek was hammered down to 7-5 favoritism in an otherwise wide open race. After chasing Hagler through the first part of the race, he was confronted by Courvoisier who would stalk and pounce to the lead. Late in the race a deep closer Smarten Up ran into 2nd but was unable to get by Courvoisier.

The winner is a 3 year old colt out of Tapit. Tapit has never produced a Kentucky Derby winner, but has had solid success in the Belmont Stakes. He was the sire of last year’s winner Essential Quality.

Courvoisier is trained by Kelly Breen and ridden by Jose Ortiz. Neither have won a Kentucky Derby to this point.

Like most tracks around the country, Oaklawn Park was under heavy siege from rains throughout the weekend. One unique characteristic of the track is that it is located in a national park which means that deicing chemicals are prohibited. This often means the moisture makes the track really sticky.

In the Smarty Jones, Home Brew went off the favorite and failed miserably finishing 10th. Instead it was Dash Attack who closed from over 7 lengths behind at the half mile pole to win by 2 lengths.

The winner is a 3 year old colt out of Munnings. The sire has gained quite a reputation for producing good mud runners. This could be a factor as the first Saturday in May can frequently turn up sloppy conditions.

Dash Attack was ridden by David Cohen who has never won a Kentucky Derby. The trainer of the colt Kenny McPeek has won 2 out 3 Triple Crown races. However, he has yet to win the Derby.

The Sham Stakes turned up a short field which is not unusual for California preps. However, this was a unique prep race. Currently Bob Baffert is prohibited from winning Kentucky Derby and Oak points. However, there is no ban on him running in prep races.

In the Sham entered 2 runners. They finished 1-2 with Newgrange finishing ahead of Rockefeller. This makes the points picture a little unusual.

#1 CENTERFOLD ANGEL (2-1) looks like a solid favorite given edges in speed & power rating. #4 DOUBLE DOINK (7-2) should have the stamina to handle the distance. #5 LIL TATER (9-2) is in good form and has good early pace. #6 SOUR MASH (4-1) has to be respected based on the connections.

#1 SPRING EMPEROR (10-1) could pull the upset based on speed and pace figures. #3 CLASSIFIED INFO (2-1) has been proven at this distance and boasts the best overall power rating in the group. #6 AMERICAN ROMA (7-2) could get the best of the race flow in today’s race. #7 STARINTHEMAKING (9-2) wouldn’t be a surprise winner.

#3 QUIET PLEASE (7-2) has the top power rating and goes out for top connections. #6 GO METRO GIRL (8-1) has the top speed figures in the group and could get a perfect setup. #2 MARIANNA QUEEN (9-2) shouldn’t have a problem with the distance. #8 MOMENTS TO SAVER (5-1) is an interesting outsider worth a look.

#3 VERRAZANO BRIDGE (9-5) is a deserving favorite based on speed figures, but it is concerning to rely too heavily on that in these maiden claiming. #7 ENANO (3-1) should get the early jump and could maintain that around the track. #4 MAJESTIC SKY (4-1) could get the dream trip in this spot. #8 ABOUT THE MULTIPLE (6-1) is interesting at the current price.

#5 PAPER MANSION (7-2) has been in solid form of late and running against better. #2 CUP OF LIFE (6-1) makes sense from a speed figure standpoint. #6 BEACH DAZE (6-1) should be competitive based on the overall power rating which has it tops in the group. #7 DAREDEVIL BULL (5-2) goes out for a good barn, but looks like a potentially vulnerable favorite.

#9 EXTREME FORCE (6-1) looks formidable here given the edge in a number of key categories including speed & class. This one looks like a big upsetter. #2 HEATED BATTLE (5-1) should be in the right spot early to give this horse a chance to get the job done. #8 E T'S DEUCES WILD (10-1) merits consideration in this spot given edges in speed & race flow. #11 AMERICAN QUALITY (3-1) could get a perfect pace scenario today, but the price may be a bit short.

#1 CELTIC HEART (6-1) is worth a look here given edges in record at the distance & pace numbers. #8 CHARGER (2-1) has a great shot in the race given the advantages in speed & power rating. #5 THE GREAT GAZOO (3-1) has to be respected based on the connections. #4 JOHNNY SWISH (8-1) could get a nice setup here.

#7 THUNDERSHOOK (5-2) is in with a major shot holding advantages in speed & class. #5 SOUPER FLY OVER (9-2) should have enough in the tank to get the extended sprint distance. #4 BIG CITY BOB (6-1) could get a perfect pace scenario today. #3 SNEAKINESS (6-1) is interesting at the morning line or higher.

#4 DIGGERS DIAMOND (3-1) is worth a look here given edges in pace numbers & power rating. #9 WICK (6-1) is a major player based on speed figures. #10 LOAD UP MOE (5-1) will likely have the stamina to outlast these in the final jumps of the race. #1 NIANGUA (6-1) looks to have to have kept the best company in the previous starts.

For help with all of your week’s selections don’t forget to check out the Betting News free handicapping tools. Given the unpredictable weather around this time of year these real time tools can be a huge asset when having to call audibles due to scratches.

It has been a miserable month for the Seattle Mariners, and things are unlikely to get any better tonight as they welcome AL Cy Young Award favorite Justin Verlander and the Houston Astros to T-Mobile Park. After just missing out on the MLB playoffs last season, the Mariners entered this season with hopes of finally END_OF_DOCUMENT_TOKEN_TO_BE_REPLACED