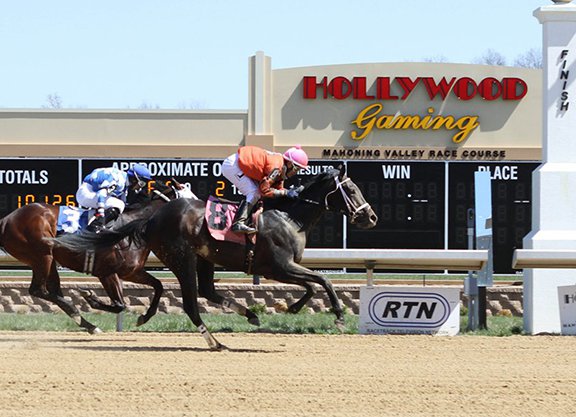 Mahoning Valley will run their 2nd of 3 days on Tuesday. The card is a dream for players who love the claiming ranks of racing. The last 5 races feature horses in for a claiming tag.

The track condition was listed as fast. It was pretty clear from the racing that the track is pretty well packed. There is little to no moisture currently in the ground and if that continues track bias could prove to play a major role in the outcome of a lot of races.

It seemed as though the inside rail was the place to be up the backstretch. Jockeys did show a preferences for wider paths in the stretch. There weren’t significant winds to conclude why that might be the case, but it is worth noting that horses from inner posts had a significant advantage on Monday’s card.

Speed was dominant on Monday at Mahoning Valley. Only 1 winner was able to come from off the pace. That was the heavily favored Centrist in race 4. He sat just 3 3/4 lengths behind a blistering pace of 22.53 and 45.89. For reference race 2 under similar conditions went 23.32 and 47.35 for the first two calls.

All other winners sat on or just off the lead and ran home. Proof of a strong speed bias can be seen in the result of race 3.

When trying to determine bias, it is important to look for results that are out of the ordinary. The 3rd race demonstrates why a speed bias was likely present. A 26-1 shot was able to set the pace and hold on despite a three headed battle up front. Meanwhile the race favorite was parked three wide and off the pace.

When the time came to start running the 26-1 shot held on for third while the favorite plummeted to the back after a brief push on the leaders. The uniqueness of this result can be a hint that a bias may exist on the track. This seemed to be confirmed by the rest of the results on the card.

Mahoning Valley continues to be a track of great parity. Frequently the 8 races will be won by 8 different sets of connections. However, on Monday three people had doubles on the day.

Jockey Hector Berrios was the only multiple winner in the irons with 2. From a training perspective Robert Cline and Nestor Rivera both had training doubles on the day as well.

#4 ONLY ONE BOSS LADY (6-1) is worth a look here given the connections and the company kept in recent starts. This one is a big upset possibility. #7 SWEET BETTY JOYCE (8-1) has also been running against better and should be able to get the distance if the track is tiring. #6 GRINS N’ WINS (5-2) should be competitive today based on speed figures & power rating. #8 JETTIN PEGASUS (2-1) makes sense, but doesn’t offer much value at the price.

#7 LADY FORTUNE (8-5) has a great shot in the race given the advantages in speed & record at the distance. #3 AIN’T SHE TWEET (4-1) looks reasonable to at least hit the board in this race, but wouldn’t be a surprise winner either. #4 QUALITY BET (3-1) merits consideration in this spot given the edge in class. #2 DANZA MAGIC (10-1) should be in the right spot early to give this horse a chance to get the job done. These ones are dangerous at a price

#2 PULPIT’S PURRFECT (2-1) has to be respected today edging the field in several key handicapping factors including stamina & power rating. #1A TEMPLEMENT (7-2) has run speed figures lately that make him a major player. #9 PASSIONFORTREASURE (8-1) is a longshot that should be competitive. The price makes this one extremely enticing. #1 J P’S GLADYS (7-2) is the other half of the entry and looks to have a shot here too.

In claiming races it’s never a bad idea to look for a little value as these can be inconsistent runners. #2 ANNMARIA (5-1) should be be in a good spot to pull of the upset based on speed & pace numbers. #3 ABBY’S DESTINY (5-2) has been running against better and may appreciate the class relief. #5 GOLDEN GALAXY GIRL (9-2) has to be respected based on the connections. #4 WOLF EYES (3-1) wouldn’t be a surprise, but the price is a bit short.

#2 ADIOS BOBBY (6-1) comes into the race running solid speed figures of late. #11 ADANO (10-1) has the top power rating and if speed is holding could pull the big upset here. #1 POMPEY’S RULE (3-1) looks to have to have kept the best company in the previous starts. #3 RESTITUTION (20-1) has a chance to get a perfect pace setup in the race.

This feels like a wide open affair and seems like a race that needs plenty of spread in horizontal wagers. #7 LA MUNECA (9-2) is in with a great chance based on the horse’s advantages in class & pace numbers. #3 DUDES LAWYER (3-1) has also run against some better horses that make him a major player. #2 SPECIAL BEACH (4-1) merits consideration in this spot given edges in speed & power rating. #4 CARDIOVERSION (5-2) has to be respected based on the connections.

#5 DYNAMITE CLOUD (4-1) is worth a look here given edges in record at the distance & pace numbers. #1 CHOCOLATE PHILLING (7-2) could get a perfect race flow in this contest. #8 FOREVERJUMBONMIKE (5-1) is proven as a good bet to at least hit the board under today’s distance and surface conditions. #6 STREAKY (5-2) should be competitive today based on the horse’s recent speed figures. I just get nervous about taking favorites at this low of a level.

Mahoning Valley won’t be the only game in town on Tuesday. Parx, Delta Downs, Penn National, and Turf Paradise are all running as well. Don’t forget to check out the Betting News free handicapping tools to help you solidify all of your Tuesday selections.