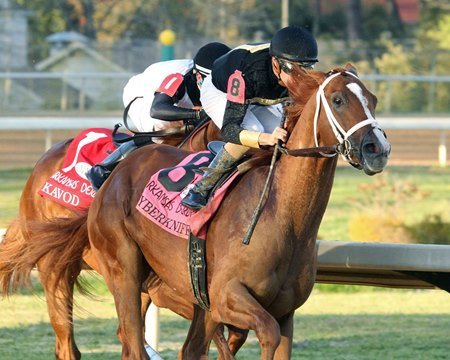 Kentucky Derby fever is boiling as racing fans sit less than a week from the post draw. Once positions in the starting gate are set, the handicapping really begins.

Perhaps the most positive update for sports bettors and horseplayers alike is that Churchill Downs Inc. and the race books in Nevada have finally ended their 3 year standoff.

Since 2019 there has been a contract dispute that prevented Nevada racing books from taking action on bets at Churchill Downs. An agreement was finally reach and now players across the country regardless of location will be able to watch and wager on the Kentucky Derby and all of the other Churchill Downs races in the spring meet of 2022.

I have some serious concerns about this horse’s maturity. He was extremely green in the Arkansas Derby and has a history of bad behavior in the lane. “Green” identifies a horse that lacks professionalism. It caused him to get DQ’d on debut and was evident again in the final prep. My concern becomes his emotional maturity when he is surrounded by thousands of people.

Nevertheless, he seems to be the horse that is showing in the mornings workouts that he is ready to run a top effort in the Kentucky Derby. It is interesting that Florent Geroux had his pick of Cyberknife, Zozos, and Tawny Port. He chose to stick here.

The jockey musical chairs have begun. Jockey changes for the Kentucky Derby usually happen for 1 of 2 reasons. The first is that the regular jockey has ridden multiple mounts and gets to choose which horse he/she rides.

The other reason for a jockey switch is to go with someone who has better experience or may fit the horse better in a challenging race like the Derby.

In the case of Zozos the former is true. Florent Geroux opted to go to Cyberknife and left this runner without a jockey. Trainer Brad Cox turned to Manny Franco who casual fans may remember as the jockey aboard Tiz the Law in 2020. I don’t think many would argue that while Franco is talented, this is definitely a downgrade.

The impressive Wood winner was left riderless when Joel Rosario confirmed he would not ride Mo Donegal in the Kentucky Derby. Instead Rosario chose to stay with Steve Asmussen and probable Derby favorite Epicenter.

Mo Donegal did pick up the services of Irad Ortiz Jr. who is on par with Rosario in terms of talent, but I much preferred Joel on this runner who will need perfect timing to get the same trip he got in the Wood Memorial in the Kentucky Derby.

This runner threw up an absolute clunker in the Florida Derby. He was announced as off the Derby trail. Conveniently for the connections that doesn’t mean anything official until they open the entry box.

Earlier this week it was announced that Classic Causeway did intend to go forward to the Kentucky Derby.

Its hard not to think that the connections saw what is potentially a race with no front runner and wanted to take a shot. Classic Causeway has been a need the lead type throughout.

His presence should be good news for fans of closers like Barber Road, Mo Donegal, and Zandon who will need an honest pace to do their best running.

The talented Steve Asmussen was declared out of the Derby. He is dealing with a foot issue that prevents him from going forward. The runner was last seen being left at the gate in the Wood Memorial and never menaced.

This runner was incredibly impressive winning just his 2nd career start in one of the top grade 1 races for three year olds on the Derby prep trail. However, concern has arisen that this could be too much too soon for the young horse.

Many surrounding the horse suggested to the owner to skip the Santa Anita Derby and let the horse progress on a more traditional path. The owner ignored the advice, won the California prep, and has another horse in the Derby. This is the same owner who sent Medina Spirit in 2021.

While casual fans may think Taiba answered the bell in the Santa Anita Derby he is on a very conservative work pattern heading into the Derby with only 1 official work between the races. This has led to speculation that the horse did not come out of the final prep in the best of form.

There is still no word on what Early Voting will be doing for the Kentucky Derby this year. Speculation is mounting that he will scratch and go to the Preakness a la Cloud Computing who did the same for these connections.

However, this is just speculation at this point and it would be hard for connections to pass on a race where they may be alone on the front end.

Post position can have a major impact on a horse’s chances and the pace scenario of the race. Handicappers should beware of getting stuck into their winner this week.

This process allows for you to account for what’s happening this week without getting sucked in by the fool’s gold that comes with 2 week wall to wall coverage.