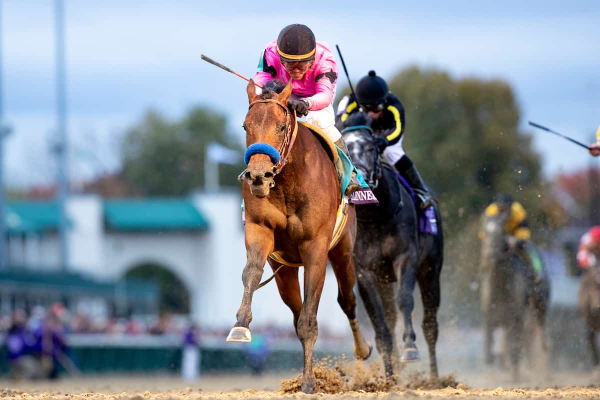 When handicapping a race such as the Kentucky Derby, a number of factors need to be taken into consideration. With rain in the forecast for Saturday, attention needs to be paid to horses that need a wet or sloppy track to succeed or at least improve their chances. Also, post positions, coupled with a horse’s particular running style, play a significant role in the outcome of the race.

Two horses will take a majority of the money and deservedly so. Bob Baffert has won more Kentucky Derbies (5) than all other trainers in the field COMBINED. His strongest chance this time around comes with Game Winner. Game Winner is a horse that performed admirably in the winter, losing by a nose to the now-scratched Omaha Beach and battling gamely in defeat to stablemate Roadster in the Arkansas Derby. Of all three Baffert trainees, Game Winner is the only of the three retaining his jockey. Joel Rosario has been aboard five of the horse’s six lifetime starts, including his triumph in the Breeders’ Cup Juvenile Classic.

Maximum Security is a horse that has been shrouded in secrecy. Unbeaten, the Jason Servis trainee broke his maiden in December with a $16,000 tag. He then came back and won two Optional Allowance Claiming races by a combined 14 lengths. It was then onto the Florida Derby, where he won by three. An argument can be made that there’s been a long layoff and the field at Gulfstream wasn’t stellar. However, the horse has had plenty of rest and could be sitting on a huge race. Those who base their handicapping on workouts will throw the horse out given his three slow works, but that’s all part of Jason Servis’ plan.

Horses That Can Win At Somewhat of a Price

Tax is a horse whose post position and running style don’t necessarily coalesce. His running style is that he is near or close to the lead. Ideally, that would be a good sign coming from post 2. However, in a race with 20 horses, a bad break could doom Tax and make it difficult for him to get free and necessitate going wide. Should he break sharply, he will be able to save ground, and if the opening half-mile fraction is sensible, could be left standing or factoring in the top three conversation at the end.

Win Win Win is a horse that has great ability and has faced some pretty stiff competition. His workout on April 28 at Churchill Downs was extraordinarily impressive, and should Julian Pimental have enough horse coming down the stretch, Mike Trombetta could collect his first Derby win. Win Win Win is a dead closer and will need a good pace to run at. His post position is solid, enabling Pimentel to save ground and get close to the rail and out of harm’s way as the race unfolds in front of him.

Vekoma, despite his unorthodox running style, could stand to benefit the most of any horse in the race if the track comes up muddy or sloppy. Javier Castellano’s Derby record is far from superb, but he still is one of America’s best jockeys year in and year out, and the horse has been steadily improving.

Ways to Play the Race