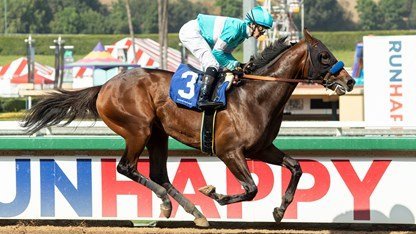 The Kentucky Derby prep races are wrapping up. With only a couple chances left to earn points, it is time to start identifying contenders and pretenders.

This list does not include Messier who currently has a 107 Equibase Speed Figure to his name. The colt currently has 0 Kentucky Derby points but was transferred out of the Bob Baffert barn. This means he will now have the chance to get to the Derby by winning the Santa Anita Derby. His current speed figure is among the top in the three year old crop.

The number in parenthesis after the horse’s name is the total number of Derby points earned to this point. The top 20 will be offered spots in the gate with the next group being named as also eligibles. Some horses may pass on the Derby which could then draw in horses from further down the list.

This runner gave arguably the most impressive Kentucky Derby prep of the season thus far when he rolled late to take the Louisiana Derby at Fair Grounds. Assmussen holds the unfortunate distinction of most Derby runners without a victory. Perhaps this is the year he can break through.

White Abarrio was impressive in the Florida Derby. The problem is that the race didn’t come up that fast and trainer Saffie Joseph Jr. is a beast at Gulfstream Park. His horses have failed to achieve the same success on other circuits. I am not convinced this one is a Derby winner.

If ever there was a “Derby Fever” horse this might be the one. Through it all the connections have been talking about shipping this one to Europe to run on turf. All of the sudden this one picks up some Derby points on synthetic surfaces and is a Derby radar horse. This one is a Derby pass for me.

I’m not sure how strong the Arkansas Derby was. Nevertheless this horse had a really weird trip and still won convincingly at Oaklawn Park. Cox is the reigning Eclipse Award winning trainer and this one is the kind of horse that is progressing at the right time. In the weeks leading up to the Kentucky Derby, players would be wise to follow the narrative on this runner to decide if he’s continuing the progression. If so, he’s a major threat.

Following the Saudi Cup, I wrote about the rise of Japanese runners. This horse was included in that mix. Horses from Japan have proven that they deserve to be in on the conversation. I really like that this one is already at Churchill and getting familiar with the surroundings and the track surface. Unless there is a lot of negatives out of the barn leading up, this one will be all over my tickets on Derby day.

In the Kentucky Derby Gate

Had the chance to establish himself in the Arkansas Derby and just didn’t look good fading from the early pack. That may not be everything as speed hasn’t really held at Oaklawn, but this one feels like a cut below the runners that will end up in the gate.

I was all in on this runner in the Arkansas Derby. I thought this horse would be written off due to the low speed figure earned in the last race. He got everything I wanted at Oaklawn and just couldn’t do any running late. This one is a major toss for me in the Derby.

This runner won the Sunland Derby and did beat Messier last year, but I just don’t trust this one. The Risen Star was the most legitimate field he faced and he was a far cry from winning that race finishing 6th.

I think this one is going to be the buzz horse into the Derby. Handicappers will point to the huge closing kick this one has showed in the last two races. The problem I have is that the Kentucky Derby has been a front runners game largely since the introduction of the points system. I don’t want my eggs in the basket of a horse that needs to come from out of it to win.

Clunked in the Arkansas Derby after an upset in the Rebel. Some will point to an injury that was reported after the last race as the reason this one didn’t have its best, but maybe the answer is that he’s just not a grade 1 dirt router. The horse is gelded which would be awesome because it means we could see a Derby winner runner beyond his three or four year old season.

If you like California speed, this might be your play. However, this runner romped over Doppelganger at Santa Anita. That runner was awful at Oaklawn against the East Coast contingent. This one could easily be the favorite especially when you consider he has thousands of casual owners via MyRaceHorse. These runners are often way over bet. I’m hesitant to endorse this one.

This one is actually kind of interesting. The New York prep circuit has been most terrible in the Kentucky Derby, but this year there are some sneaky signals that this could be the year for these runners. This one is on my radar, but I will be looking for a convincing win in the Wood Memorial if this one is going to be a part of my Derby day plays.

This is another Brad Cox who looks alright on paper. The problem is that this one ran second to Epicenter in the last race. While this horse seems to be coming along nicely, the likelihood that he can make that kind of jump in a short time just seems like a reach.

If you like Crown Pride, this one also has to at least be on your radar. He set fairly quick times as the pace setter in the UAE Derby and just didn’t have the sustaining power to get the job done late. Crown Pride put him away in the last half furlong. The problem with me for this runner is that despite quick fractions the horse didn’t have a ton of pace pressure throughout. Knowing that many will press for the lead in the Kentucky Derby, I feel this one is going to fade off late and be no factor.

This is the loser that I think you want out of this weekend’s races. He took two starts to break his maiden. The Florida Derby was his third career race. In the race he ran almost the same trip as the winner except he was inside the whole time. This meant that White Abarrio tipped out first getting the third path into the lane while Charge it had to swing around to the 4th. In the lane Charge it responded like a shot to urging, but wandered right up the tail of White Abarrio while closing. He then shifted back out and came again. If this one gained some professionalism from the start, he may be the likeliest Derby winner we saw all weekend.

This one ran second in the Jeff Ruby behind a turf horse. Hard pass for me despite the impressive connections.

Smile Happy will look to run in the Blue Grass ahead of the Derby. It will take something special for the son of Runhappy to turn the tables on Epicenter who he faced in his last race at Fair Grounds. It is a wait and see for me on this one, but I lean pass.

This one just barely cracked the top 3 of the Louisiana Derby. It is hard to see this runner making enough progress to get the job done even if he makes the gate at the Kentucky Derby.

If this runner was a legitimate contender, the Arkansas Derby would have been his for the taking. Despite sitting wide, the colt who I had shown some support for, did little to make me think this one can even hit the board in the Derby.

This one couldn’t beat Classic Causeway who didn’t exactly flatter the Tampa Bay runners on Saturday. This one is a hard pass.

This one has lost 2 straight to Tiz the Bomb who will be a career turfer. The only win to date is a maiden claiming victory. Nope.

This girl ran a respectable Arkansas Derby against the colts. Even if she had won the race there was a strong possibility she was going to the Oaks instead. She will likely be the favorite in that race and I don’t expect her to even consider the Derby. If she were to get in here though she would be a great bet against because she would take a ton of narrative money. These horses get over bet because of their story, not their talent. She is talented and will be a deserving favorite in the Oaks, but not good enough to win the Derby.

This one was rolling at the end of the 2 year old season capping it off with a win at the Breeders’ Cup. This one seems to just be the precocious type as he really hasn’t progressed in his three year old season.

This horse is tricky. Of the horses out of the Rebel it is probably the one that I would like best. This one was behind Un Ojo which isn’t great, but if you like Barber Road, this one finished ahead of him. Lukas has major Derby cred so maybe this one is an interesting outsider.

The lone win came at 6 furlongs in the Zia Park Derby. No thank you.

Third in the UAE Derby this one is the least enticing as he closed into a fast pace and still could get into the exacta.

This runner finished second in the Fountain of Youth. Given the poor performance of Simplification in Arkansas this weekend, this one is probably a fade.

If you like Morello, this one finished just behind him in the Gotham. The trouble is that this one is pointed to the Bay Shore instead of the Wood which implies this one won’t be pointed toward the Derby anyway.

The following horses have earned Kentucky Derby points. Given that these horses are currently outside the top 2o they are unlikely to make the gate unless they score more points.

The list does not take into account whether or not the horses have been declared off the Derby trail.

It is still far too early to lock into a Kentucky Derby pick. With a handful of preps and several workouts left before the first Saturday in may, any picks at this point should be done strictly for editorial purposes with the ability to pivot on the day as the picture becomes more clear.

Here is stable of my top 5 Derby contenders heading into the last month of prep races.

Follow all of the races in the month-long lead up to the Kentucky Derby with the Betting News free handicapping tools.

It has been a miserable month for the Seattle Mariners, and things are unlikely to get any better tonight as they welcome AL Cy Young Award favorite Justin Verlander and the Houston Astros to T-Mobile Park. After just missing out on the MLB playoffs last season, the Mariners entered this season with hopes of finally END_OF_DOCUMENT_TOKEN_TO_BE_REPLACED