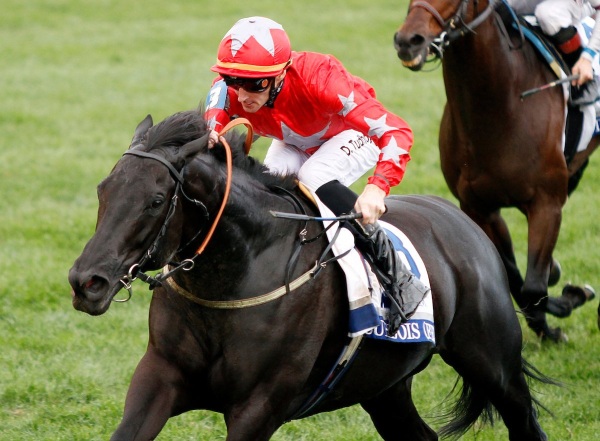 The first weekend of the Keeneland fall racing season is celebrated this year by some national network horse racing coverage on NBC and this is a win for the sport as a whole. It is rare to see horse racing on TV so every such day should be welcomed warmly and horse racing fans can thank NBC for its support of the sport. The live TV coverage starts at 4.30 pm and continues until the main event, the Shadwell Turf Mile scheduled for 5:49 pm.

Aside from the potential for new fans coming to the sports following this horse racing on NBC, the coverage of the Keeneland racing today might also be a win for the clever horse racing bettors.

The featured Shadwell Turf Mile Grade 1 stake race, a turf race over a mile, is a very interesting betting opportunity considering the size of the field and its quality.

The 2018 Shadwell Turf Mile stakes is packed with terrific horses and the amateur betting public should be split pretty evenly between the top contenders. That should offer value to bettors with a proper understanding of the specificities of turf racing.

Analysis and picks for the Shadwell Turf Mile at Keeneland on October 6 2018:

Number 1, NEXT SHARES is coming back up to the Grade 1 stakes category after a poor summer that he turned around somewhat last month in an ungraded stakes race. NEXT SHARES came close to winning grade 1 turf races twice this year bit was notably beat by Heart to Heart twice while carrying less weight. NEXT SHARES starts from the rail which is not bad at Keeneland but he will need to navigate a lot of traffic in the stretch and needs to improve to best this field. Not impossible for a place but the win looks harder.

Number 2 DIVISIDERO has been consistently well placed in Graded Stakes in the last two years but does not have particularly impressive stats in the win column. In today’s race, the pace should set up horses who come from behind but manage to stay close to the action. DIVISIDERO might be able to keep up with the early pace, especially given that he starts on the inside. The distance might be a little bit short for him to really shine and the hot workout is not particularly indicative of future success for DIVISIDERO so he might be able to grab a place on the podium but I have my doubts.

Number 3, GREAT WIDE OPEN likes to go to the front and he will have a good post position to attempt that but there is some strong opposition for the early pace in the race. Moreover, GREAT WIDE OPEN is stepping up in class and he has not been shining much in the lower grade races so the competition today should be too tough for him. He might however spoil the pace for others. Including the favorite…

Number 4, IMPERATIVE is not having a very good year 2018 and today is not likely to improve it. IMPERATIVE has been a pretty inconsistent horse but even in his best days, he only beat much lesser competition. If this is a good day for IMPERATIVE, he might upset but nothing indicates that he is on the rebound for this one…

Number 5 HEART TO HEART figures to be the betting favorite on the basis of his numerous Grade 1 wins and places. He placed a close second in this same race at Keeneland last year and since added two turf route Grade 1 wins to his resume. HEART TO HEART was a bit disappointing in his last two races and he had a bit of trouble starting fast as he usually does. HEART TO HEART needs to grab the lead early to win it and with recent slow feet and some opposition on the pace, there is a strong chance that he does not manage to lead the pack in the turn. If he doesn’t HEART TO HEART is likely to be beat and therefore, I believe that it is worth betting against him today.

Number 6, SYNCHRONY won his last two races in relatively slow time, but it was still pretty good performances considering the fact that the pace leading to the stretch was too slow to advantage his late running style. SYNCHRONY has never won at the Grade 1 class level but managed to reach the podium in his only attempt earlier this year. SYNCHRONY works for a trainer in form recently and the blazing workouts say that he is ready to go. He needs to give his best today, but he has a chance.

Number 7, QURBAAN will make only a second start in the USA but the first one was a winning one, with a racing style that should be perfectly suited for today’s conditions. QURBAAN has raced on longer distances recently but did well on shorter distances in Europe previously. His jockey today can do no wrong and we can therefore bet that he will know at what time to push QURBAAN to maximise his chances… This is a step up in class and in weight but based on the workouts, QURBAAN is still in form and can do well.

Number 8, MULTIPLIER is cutting down in distance drastically and it will actually try a mile for the first time. He has shown a bit of speed on longer distances, but it remains to be seen how close he can stay to the pace in this shorter race. His jockey might have. To push him hard in the early stages, which would hurt his chances. Alternatively, he might keep the same pace and be lost in traffic which is not good either. In all scenarios, I doubt that MULTIPLIER can do much today, especially against older horses.

Number 9, ANALYZE IT works for one of the hottest trainers this year and that guy is still on a tear. Adding to ANALYZE IT’s appeal is the fact that his racing style is pretty well suited for today’s race. ANALYZE it usually sits just behind the pace, ready to strike, which is the best method on this Keeneland track. On the less appealing side, ANALYZE IT will be facing older horses for the first time and that’s a big ask, even for a horse who has done well at three years of age. Moreover, ANALYZE IT has fallen short three times in a row so breaking the spell in these harder conditions seem to be a stretch. It is not impossible for a horse of ANALYZE IT’s caliber and the trainer is a magician but I expect his odds to be too short to warrant a bet today.

Number 10, VOODOO SONG is a speedster who will need to sprint from the outside to get to the lead before the start of the turn. On the Keeneland track, that’s not easy to do and therefore we can expect VOODOO SONG to either give too much early or be parked out in a pace war which isn’t good either. Clearly this horse has a ton of talent and he has been killing it at this distance and won at the class level too. That should attract some money but based on pace and post position, I think that VOODOO SONG will not be able to win it today.

Number 11, ALMANAAR is another Chad Brown horse so we can expect him to be in top form for this one. His racing style is well suited for this track even if the outside post position could hurt him a bit. ALMANAAR is a proven threat at this class level and the distance should be OK too, though a bit longer might have been better. With a top jockey on board and a good pace scenario likely to unfold, ALMANAAR has a prime chance today.

Number 12, MR. MISUNDERSTOOD has a handful of stakes win on his resume but never at the Grade 1 level and he has not been doing so well overall in 2018. One thing going for him is that his trainer is doing superbly recently so it is possible that the barns success will have brushed on MR.MISUNDERSTOOD as well. His last race was not good however and there was no excuse for it. With an unfavorable post position, MR.MISUNDERSTOOD will not have the easiest race most likely so overall I don’t think he has a great chance today.

Number 13, BIG SCORE is winless for over 17 months but has been earning shares of the purse consistently. He has mostly been racing at a bit lower class and therefore there are not a lot of excuses for the poor performances. His workouts are worse than usual leading to this race, so nothing indicates that BIG SCORE is ready for a score of any kind today…

Number 14, BOUND FOR NOWHERE beat a couple of today’s opponents in his last race, a nice win at technically a lower class category but for a big purse so the horse’s in the field were no joke either. Before that win, BOUND FOR NOWHERE was sent to the UK to try for a Grade 1 turf sprint and came relatively close to winning it. Sprint is the operative word and BOUND FOR NOWHERE will make only a second start on this route distance. The win last month proves that he has the stamina for it and BOUND FOR NOWHERE has been training on longer distance too recently, which is a good sign. Today he is facing some quality horses and therefore the task may be harder than the last time. Still, the same jockey is on board and killing it on the track recently, so we can expect a sound strategy on his part. The tactical speed can help from the outside post position or trap him on the outside, so it is a bit of a gamble but at 15-1 morning line odds, it is an interesting bet…

There is a lot of quality in this big field and I believe that the morning line odds favorite will be in trouble early.

A horse coming from just behind the pace leaders should have the best chance and ALMANAAR should be right there and ready to bag another Grade 1 victory. I am not sure that the odds will be high enough to warrant straight bet but he is a key on the exotics.

Also coming in with a great chance is QURBAAN who should sit right behind the pace and should actually have an easier trip than my first selection. In terms of class however, QURBAAN is a bit below and class is key on the turf.

I think that BOUND FOR NOWHERE deserve much shorter odds than what the morning line odds handicapper gave him. Granted, he is more of a sprint specialist and he starts from the outside but the win last month on this distance was no fluke and he could surprise at high odds.

Lastly, I believe that SYNCHRONY deserves a spot on the exotic tickets, at least. He seems in great form and if he can step his game a bit, he can do well at interesting odds.