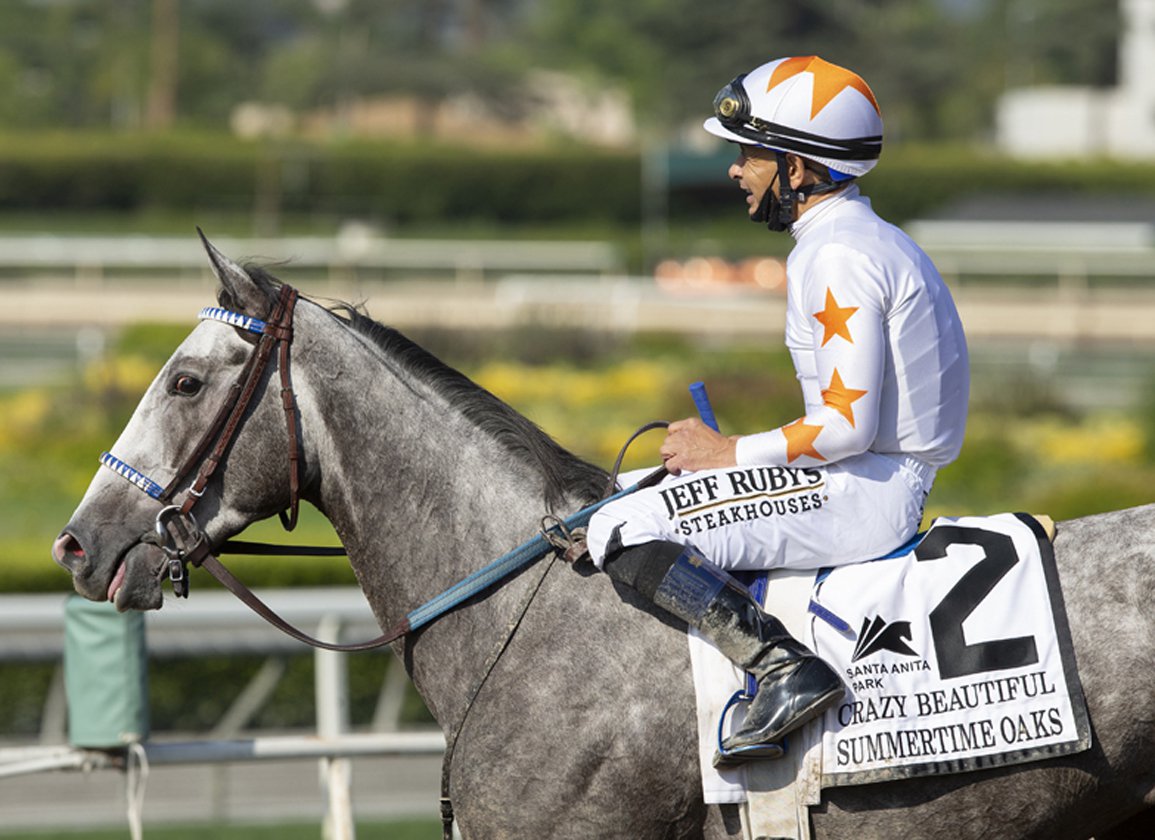 In the penultimate card of the Keeneland meet, Crazy Beautiful will make her turf debut. During her early career she was well thought of in the Oaks division, but failed to strike in the biggest races of the division including the Alabama and the Kentucky Oaks. Now trainer Kenny McPeek will try her on the turf hoping for different results.

#6 ENGRAVE is classy and should get a good setup here under the handling of Joel Rosario. #3 INJUNCTION fits her based on speed figures and should be able to handle the extra distance of the extended sprint race. #1 MONEY MIKE also appears to be one who comes into the race live. #2 EMERALD EXPRESS is a breed play. While not the likeliest winner, the price makes this colt interesting.

If #6 SPEND AGAIN is live on the tote this one could be a player. #1 ATLANTIC DANCER has the experience factor which includes running speed figures among the top in the group. #4 I'M A WAR LORD is well bred for the longer distance. #10 MO Z may get out in front and try to take the group around the track. Forward placement has been vital on the Keeneland dirt this meet.

#4 GUANA CAY will be forwardly placed and has the best figures in the group. She looks formidable but will likely be a super chalk and should either be used exclusively or tossed out completely. #9 BERTRADA will have Joel Rosario in the saddle which has to help her chances. #8 HOLDONTOYOURTIARA is interesting at 12-1 on the morning line. #2 FLASHY BIZ has spent her time running against better and may have found some friends here.

#2 GOOCH GO BRAGH is the class of the field and should get a good set up here. #12 WALHALLA and has the top speed figures in the group. #14 OVERANALYTICAL will be ridden by Florent Geroux, but will have to overcome a wide post if he even draws in. #8 ENCOURAGE has interesting turf breeding that could make him a big player at a fat price.

#3 FLAT AWESOME JENNY goes out for the connections of Norm Casse and Tyler Gaffalione. She looks to be the class of this field. #4 CANADIAN GINGER is a generous 5-1 on the money line considering she has the best speed figures in the group. #9 FRILLS could get on the front end and surprise at a price. #2 JUNGLE JUICE could be cycling up to a top performance here.

#5 FIRST LINE is at odds of 3-1 but has the best speed figure, class, and pace numbers. It seems like it would take a lot to overcome this one. #1 CHEFFY has a shot with connections like Brad Cox and Joel Rosario behind him. #8 LAUGHING BOY might just get the best of the race set up in this spot. #3 DECISION MAKER will look to carry his stamina to the wire.

#2 BRITAIN'S KITTEN is 15-1 but could be on the front end. When the Keeneland turf has moisture in it, it can be hard to make up ground and this could be a great separator in the turf pick 3. #3 KISS THE SKY is favored and has done nothing wrong to suggest she can’t get the job done for Mike Maker. #9 SPEAKING SCOUT is interesting for Graham Motion at 10-1. #8 LUCKY BOSS will get McPeek’s first call rider in Brian Hernandez.

#1 JESTER CALLS NOJOY goes out for Todd Pletcher who is one of the most dependable trainers in the country. #9 CHI TOWN LADY has speed figures and class numbers to be in this spot and is trained by Wesley Ward who lives to get them out of the gates quickly. #5 KANT BELIEVE IT and #10 SWEET DANI GIRL are both interesting at slightly better prices than the top 2 selections.

#12 QUEENSHIP is 8-1 and goes out for Joseph O’Brien who is a great turf trainer. #4 TOBYS HEART has been in good form lately and if she finds her best numbers should be good enough here. #3 CRAZY BEAUTIFUL debuts on the turf, but has faced considerably better in some of her back races. If she takes to the turf, she could be in for a big performance. #14 GAM'S MISSION will be well to the outside, but rates out well in terms of stamina. This will help if she ends up with a wide trip throughout.

#5 CONTRACTOR BILL has hit the board at this distance before and boasts the best speed figures in the group. #7 DOCTRINAIRE is at odds of 12-1 and has faced tougher fields in his past performances. #8 BROTHER BRAD’s breeding suggests he should be good in this spot although Saffie Joseph Jr. has been a bit cold outside of his home track (Gulfstream Park). #1 TENOR draws the rail for Diodoro and Cohen and is worth a second look.

For more information about the Keeneland races and the horses, check out the artificial intelligence picks offered on the Betting News website. All content is completely free and uses machine learning to establish horse’s win probability based on analysis of thousands of races.

Betting News will continue covering the Breeders’ Cup in the week leading up to the two day racing festival.

The 2022 Formula 1 season is only six races deep, but the race for this season’s championship alerady appears to be down to just two drivers. Last season, Red Bull driver Max Verstappen claimed his first Formula 1 World Drivers’ Championship in highly controversial circumstances, with Lewis Hamilton denied what would have been a record-breaking END_OF_DOCUMENT_TOKEN_TO_BE_REPLACED