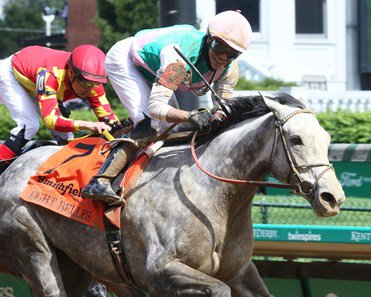 The Bill Mott trainee Obligatory was installed as the 3-1 morning line favorite in the Raven Run at Keeneland on Saturday. The gray will face the likes of Caramel Swirl and Souper Sensational in the race.

#7 DISTORTED VIEW is the favorite for Wesley Ward. #1 SLUSHY seems to have a class, pace, and speed edge based on past performance, but its hard to full trust those numbers this early in a horse’s career. #3 CURBS AND CONES could get the best of the race shape here, but is yet another short price in a maiden claimer. #5 SIMPLY COMPLICATED has the stamina to suggest that if the rest are faltering late she may be able to stay on for the win.

#6 TOP GUN GIRL looks tough to beat here if it can run back to previous numbers. Unless this one sits chilly on the board, she may be able to best the boys here. #10 ATRAS is at odds of 8-1 and ranks well in a lot of key handicapping factors. #1A OVERLANDER is at odds of 15-1 is one I like if the race switches to dirt which seems unlikely. #4 MALIBU TIME is a bomb who could factor at a sweet price of 20-1

#2 QUICK RETURN is at odds of 9-5 and is the class of the field, but Santana has been cold which does put a bit of doubt in my mind on this one. #5 BROTHER AARON should get a good set up here which could be enough. #6 PETIT VERDOT comes to the race in good form and has speed figures that are better than the rest in this group. #3 SOARING BIRD is proven at this distance and will look to parlay that into an upset victory here.

#6 BEACH FLOWER looks like the runner to beat here based on overall ability. She comes into the race in good form making her that much more difficult to beat today. #1 MICROCAP will be flying on the front end and could use that to take the group wire to wire. #2 FIRE CORAL has top speed figures in the group. #3 EMILIA'S MOON makes sense on speed and class as well.

#5 CAVEAT EMPTOR is at odds of 8-5 should be out near the lead and has run the best numbers in the group. #7 WAR MACHINE will get Tyler Gaffalione who is a pro on the Keeneland turf. #12 SEVEN CHANNELS and #4 MAJOR SPARKS are longer prices that I like to make things interesting in the exacta and trifecta.

#2 BEAU LUMINARIE looks to have a big pace edge in this spot. #7 CANDY TYCOON has been doing everything right lately and may be able to take a huge step forward. #4 MYSTIC NIGHT has to be respected as the favorite in the race with several important edges on many of these runners. #6 BOURBON CALLING is a form play at 4-1. The horse could be cycling up to a big run here.

#6 PIPELINE looks good here and has been a bit of 7 furlong specialist. #1 SOUP AND SANDWICH ran against much better earlier this year and may have found his friends here. I worry his value will be eliminated because novice bettors like the name. #9 RUNWAY MAGIC is at odds of 12-1 in good form and is another who has excelled at the 7 furlong distance. #2 BOCA BOY is another 12-1 shot who could find the pace scenario of the race to his liking.

#11 BIZZEE CHANNEL may just have the stamina to pull off the minor upset here in the late stages of the race. #5 MR DUMAS has to be considered based on who he has been running against lately. #6 ENGLISH BEE is one who looks like he could potentially couple good recent form with a dream setup in this spot. #1 HIERARCHY is at odds of 15-1 and could be an interesting option to pump some value into the exotics.

#8 CARAMEL SWIRL is a classy filly who may get the dream trip here. #9 ZAINALARAB has been running against some good ones as well and goes out for Chad Brown. #11 MISS SPEEDY is one that could be developing at the right time. #3 SOUPER SENSATIONAL has run the best speed figures in the group.

As much as I like #13 Obligatory, I’m not convinced the 13 post did her any favors. I will play against unless a number of scratches can get her inside of the 10 post.

#4 HEALING and should get the best of the race flow here. #12 NICE ACE is at odds of 15-1 and has a great shot here based on recent form. #10 PINE KNOLL rates out as the top horse on pure power numbers, though that hasn’t typically been as significant as other factors on turf. #8 RICOCHET is a generous 12-1 and has the best speed figures of the group.

As was reported earlier this week, the merger between Daily Horse Picks and Betting News is complete. Betting News readers now have access to all of the amazing power of handicapping based on machine learning.

If your looking to play and haven’t had time to fully analyze the card, or just want some confirmation on your opinions, check out the new tools at horses.bettingnews.com for data on several tracks around the country.