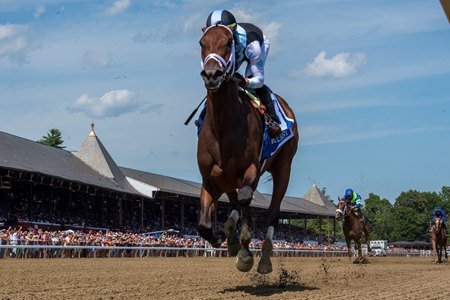 This was another week of great performances on the oval. This week‘s 3 stars features a Canadian runner and a first time starter. However, no one matched the brilliance of Nest in the CCA Oaks.

There were a couple of nice stakes performances this weekend that narrowly missed making the grade here this week.

It was start number 7 that was the charm for this maiden claimer. Though not much will likely said about the competition in this race, the claiming ranks are the backbone of the horse racing industry and worth mention. After being bumped at the start this colt by Upstart drew off to win by open lengths.

The former Derby trail runner set the track record at Monmouth Park. Regardless of what cynics might say about the track being souped up for Haskell day it is undeniable that breaking a record that has stood since 1985 is quite a feat.

The 2022 Derby participant showed his metal with a rail skimming ride for Brad Cox to win the Grade 1 Haskell Stakes. The horse was able to defeat the two more fancied runners passing Jack Christopher as he hit his distance limitation and outclosing Taiba who was rolling on the outside.

On Sunday Todd Pletcher sent out a monster at a generous 3-1 price. She was second choice in the wagering, but looked much the best. With the heavy favorite leading at the top of the stretch, the Practical Joke filly blew the doors off the competition and rolled home with ease under the handling of Flavien Prat. Kaling stopped the clock unofficially in 1:12.69.

Woodbine is located in Canada though its races are largely considered part of American horse racing.

The bettors had this one right. After being installed as the morning line favorite at 5-2 the 3 year old filly by Ghostzapper was bet down to even money at post. She absolutely lived up to the hype.

Trained by Kevin Attard and ridden by Rafael Hernandez the talented horse took back out of the starting gate. At the 1/2 mile pole she was officially listed as being in 6th position by 7 lengths.

As the horses advanced up the backstretch on the Woodbine synthetic track Moira started slowly advancing a bit closer to the first flight. Many of the leading group were significant longshots. However, one of the leaders was a Chad Brown runner named Sahlabiya. She was 3-1 on the morning line but had drifted up in the odds.

Conventional pace analysis would have given the race edge to the Brown trainee who looked to be in a prime position to get the first jump on the race favorite.

An Explosion On The Turn

As the horses hit the far turn, Moira was ready to fly and start advancing with ease on the rest of the runners. The #6 Sahlabiya has also begun picking off cheap speeds, but was no match for the oncoming freight train that was roaring up behind here.

Within a couple strides of the turn for home, the question wasn’t if Moira would win, it was by how much. The horse drew off by an ever-widening margin without any encouraging from her pilot.

Queen’s Plate On The Horizon?

In the end Equibase listed the final margin of victory as 10 and 3/4 lengths and gave the filly a career best 97 speed figure. She is now 3 for 4 lifetime and 2 for 2 in her three year old season.

The race left many wondering if the horse would be seen again in the Queen’s Plate. the event held in August is restricted to Canadian bred horses. Given that Moira is a filly she would be granted a weight break from running in the oldest consecutively run horse race in North America. The race has been run every year since 1860.

With 2 of the premier meets for 2 year olds kicking off this summer, horseplayers have come to expect some great maiden performances. However, one of the more pronounced trends seen through the first week of Saratoga was that experience matters.

Yes, horses can win on debut but even the most brilliant can disappoint without previous experience running in the afternoon. Whether it is the different time of day, breaking from the gate, the crowds, or just the intensity of the competition it is hard to overestimate the value of having a race under your belt.

Tell all that to Uncontrollable. The California bred filly is trained by Michael McCarthy and is by Upstart out of Behavioral. For her debut she was ridden by one of Del Mar’s finest jockeys in Juan Hernandez.

As the horses were loaded into the gate, Uncontrollable was 4-1 as the odds board disappeared from the broadcast. As the gates popped she had floated up to 9-2 and found herself in the middle of the pack as the horses sorted themselves out on the back stretch.

Way Out Of It

The race was a super sprint covering only 5 furlongs. That’s the same distance horses run to the halfway point in the Kentucky Derby. As the horses approached 2nd call she was back 8 lengths.

Since many horses work on their own in the mornings it can be really hard to simulate passing horses during workouts. Combine that with herd mentality of horses and it is no surprise that most debut runners win from on or near the lead.

That couldn’t have been further from the truth for this runner.

Rocketing Through The Turn

What happened next would be impressive even for experienced runners, but from a first time starter it was truly remarkable.

By the time they had exited the far turn, the filly had split horses and passed three horses with ease. She was now in 5th with plenty of ground to make up on the top pair.

While the first move was impressive, it was hard to imagine she would be able to get the job done as the track had a definite front runner profile throughout the races on the dirt. Nevertheless she proved that good horses overcome poor circumstance.

As the horses ran down the stretch it looked like the outside runner was running in fast forward. With each and every step she gobbled up ground and position.

In the end it wasn’t even that close. The official chart lists the final margin of victory as 2 lengths. Uncontrollable earned an 85 Equibase Speed Figure for the effort.

There was a general consensus heading into the Coaching Club American Oaks. This was a heavyweight showdown between two horses. In one corner was the Kentucky Oaks winner Secret Oath who last came up short against the boys in the Preakness. In the other corner was Nest who did the same in the Belmont Stakes.

The last time these two squared off was in the 2022 Kentucky Oaks. In that race Secret Oath won in convincing fashion.

David Aragona who is widely recognized as the best morning line maker in America had Nest edging Secret Oath in the odds. He was, as usual, spot on. Nest never waivered as the favored. Closing in on post time Secret Oath closed the gap, but never threatened to steal the chalk.

Despite Secret Oath getting the better of the last matchup between these two, the prevailing opinion seemed to be that Nest was working up a storm in the morning and was ready to take a big step forward.

The short field of 5 was loaded into the gate. As the gates popped open the inside two runners stumbled at the start. The bobble had a huge impact on the race shape as the #2 was considered to be a major part of the pace and ended up behind the first flight of horses.

With the lack of presence from the #2 Society, Nest took to the lead. Rather than dropping down to the rail, Irad Ortiz Jr. opted to keep the horse wide. This forced the #4 Nostalgic and rival #5 Secret Oath to run the far turn and the back stretch very wide.

After a slow start, #2 Society rushed up rankly through the gap on the rail. As they hit the halfway point of the race the horses were four abreast.

As the horses headed into the far turn the will of Society and Nostalgic broke. Suddenly fans were left with the match race they had been hoping for. Luis Saez pushed on Secret Oath and appeared to head Nest. Nest had other ideas.

Almost immediately she fought on and put her head back in front. The showdown was on…until it wasn’t.

Dominance In The Lane

Nest kept finding as the horses rounded the turn and broke for home. Secret Oath levelled off and Nest began to widen her lead. Ortiz pushed on the Ashland winner only briefly in the lane to keep her focused.

With Secret Oath put away and the rest of the field spinning their wheels, Ortiz and Nest cantered home. The final margin of victory was 12 1/4 lengths producing an Equibase speed figure of 110.

3 Stars of the Week

See a performance that blows you away this week? Don’t forget to nominate horses for the 3 stars of the week by emailing t3handicapping@gmail.com or tweeting @T3handicapping.

Betting News will continue bringing full card analysis from each and every race day at the summer’s hottest meets including Saratoga, Del Mar, Laurel Park, and Monmouth Park.

Chris first got introduced to horse racing in 2009 at Canterbury Park (Shakopee, MN). Along with handicapping and betting, Chris has worked as a teller at his local track and participated in ownership partnerships. He now enjoys sharing his passion with his wife and two young daughters who love going out to the track each and every summer.

Chris first got introduced to horse racing in 2009 at Canterbury Park (Shakopee, MN). Along with handicapping and betting, Chris has worked as a teller at his local track and participated in ownership partnerships. He now enjoys sharing his passion with his wife and two young daughters who love going out to the track each and every summer.