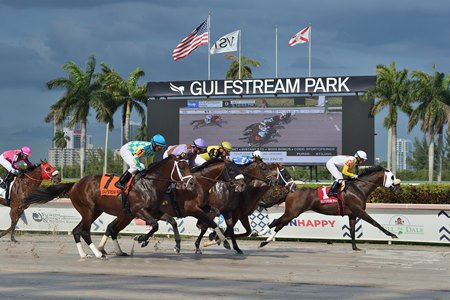 With the closing of Gulfstream Park West, Gulfstream Park has picked up year round race dates. In an effort to preserve their turf course, the track installed a synthetic surface known as tapeta. The new course will make Gulfstream Park the 1st track with 3 different racing surfaces.

Gulfstream Park’s turf course runs very differently than many others around the country. For starters, it is a speed friendly turf course. While in New York turf racing is rarely won wire to wire, at Gulfstream horses within a couple lengths of the lead at the first call win significantly more.

With the pace scenarios often ending up more like a dirt race than a turf race, many handicappers refer to the inner course as “the durf”. As the summer wears on, the course becomes especially dried out and is noticeably hard as the horses travel over it.

The track once known as Calder Race Course and then eventually as Gulfstream Park West was closed this year. The short meet run every fall use to be a brief respite for the worn turf course.

As the racing took place at GPW, the track maintenance staff would work feverishly to seed and repair the turf course for the upcoming championship meet which starts in December.

With the closing of GPW, Gulfstream was awarded year-round racing which is good for the track, but bad for the course. A solution needed to be created to give the turf a chance to rest.

When it Rains it Pours

When races come off the there are often a significant number of scratches. Fields of 12 can easily be cut down from 12 horses to 5 or 6 with trainers protecting their runners for future turf events. The hope is that the new surface will allow them to preserve larger fields even when inclement weather hits the area.

The Gulfstream Park Tapeta will not be that unique. Golden Gate Fields, Presque Isle Downs, Turfway Park, and Woodbine all use the surface at their tracks. However, Gulfstream will be the first to use it in conjunction with a dirt main track.

Create by Michael Dickinson in 2008, tapeta features sand, wax, rubber, and fibers. This synthetic mixture is laid at a depth of roughly 6 inches. The synthetic nature of the course allows for optimum drainage which can help maintain safe and fair track conditions despite heavy precipitation.

With the new Flamingo Meet right around the corner, Gulfstream will start using the new surface for the first time. As players this is a great opportunity to get a leg up on the competition.

Established south Florida players will have a less discernable advantage as they may not be familiar with how the surface plays and may incorrectly apply previous track profiles to the track.

The new course has been laid between the dirt and the turf. This will eliminate the 7-8 furlong distances on tapeta and require those races be run at 1 mile and 70 yards or more.

Early in the meet it will be especially important for bettors to track which post positions are winning at given distances. The course will not be as sharp as the turf course, but not as wide as the dirt track. In the earliest stages favor inside posts when the race starts close to a turn and middle posts (4, 5, 6, and 7) when there is a decent amount of straightaway before the first turn.

Conventional wisdom about synthetic tracks is that they do tend to favor runners who run well on turf. Since everyone will likely be trying the course for the first time, giving a slight edge to turf runners could be a great way to separate otherwise equal horses.

If you wish to go deeper, many of the past performances will give breeding ratings for various surfaces and distances. Given the limited number of synthetic surfaces in the United States, the numbers can be somewhat inconsistent. However, using these numbers to confirm or amend your handicapping opinion can be a great check point.

It is hard to project which posts or run styles will gain an advantage at Gulfstream Park on the tapeta. Generally, synthetic surfaces tend to carry less of a bias than other surfaces. In my experience this often means focusing more on the horses in the race rather than the track profile.

After establishing the early pace scenario the question becomes how likely do I think it is that any of the closers will be able to make up the ground?

Getting an Edge On Gulfstream Park Bettors

While this is generally an exercise used by pace handicappers across the country, it is a sharp departure from how I typically handicap Gulfstream Park dirt races. In those events I simply look at where horses will be at the half way point and eliminate any horse that will have to make up 3+ lengths in a sprint and 5+ lengths in a route.

This is where I think the early part of the meet could be most profitable.

The new Flamingo Festival Meet begins on Thursday, September 30, 2021 and will run through November 21, 2021. Racing can be viewed live via Gulfstream’s livestream feed or through any number of online wagering platforms.

The 2022 French Open is underway at Stade Roland Garros in Paris, France, and we are already almost through the first week of play. Tomorrow, the remaining third-round matches will take place, after which the men’s and women’s singles draws will be down to their final 16 contenders. In both men’s and women’s singles, there END_OF_DOCUMENT_TOKEN_TO_BE_REPLACED