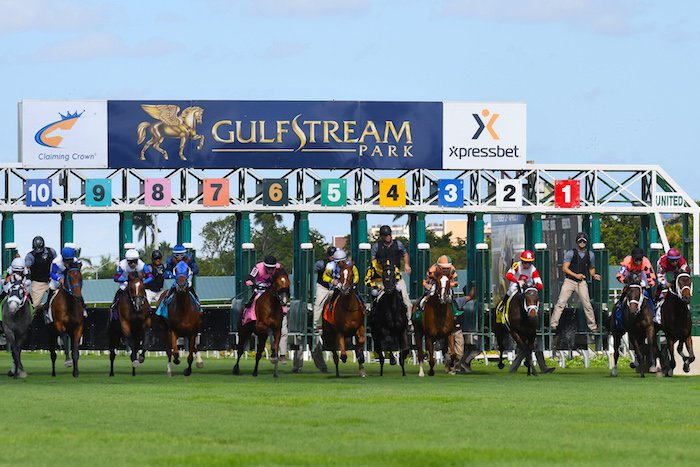 Gulfstream Park will continue its racing week on Thursday. With many tracks on holiday, the Florida track will likely have large handles as attention is focused there.

Heading into Wednesday’s card there were 5 jockeys who had eclipsed 10 wins. Luis Saez had a commanding 5 win lead over Tyler Gaffalione. Other jockeys with 10 or more wins included Paco Lopez, Edgar Zayas, and Junior Alvarado.

Zayas, who was unstoppable at the Flamingo meet will be taking off mounts to get surgery on an injured shoulder that he dealt with in recent months.

Much like the jockey standings the trainer ranks are full of New York shippers looking to escape the cold of the winter. Heading into the current racing week only 2 trainers had more than 5 wins.

Saffie Joseph Jr. won the Flamingo meet training title and is off to a great start once again. His 13 wins has him 4 clear of Todd Pletcher. Pletcher has saddled 9 winners thus far despite saddling 42 fewer starters giving him a gaudy 53% win percentage.

#3 GAGA OH LA LA (9-2) looks good here based on several key factors including recent speed figures. #5 LYRICAL (6-1) has been good at this distance and should be forward early. #6 FREEZER BURN (2-1) has the top power rating in the group and may find the pace scenario to his liking today. #7 YOU’RE THE BEST (3-1) is worth a look here given the connections.

#5 UBIQUITOUS (3-1) looks to be the class of this field. Couple that with the fact that this one could set the pace and the rest may be running for the minors. #3 GHOSTLINER (5-2) is favored based on recent speed figures and makes sense. #2 ALGONQUIN (9-2) will look to get the right set up to get the job done today. #4 EIGHTHANDBROADWAY (5-1) is worth using if the price stays around 5-1. If the price dips a bit it is probably a play against.

#1 BULLET ON TAP (7-2) is a major player in today’s race edging the field in several key handicapping factors including speed & form. #5 DOVE IN CHARGE (2-1) should get a good pace setup today. #3 FIRENSPICE (4-1) should be competitive based on the overall power rating which has it tops in the group. #4 JAN’S GIRL (9-5) is another that will be on or near the lead early and this type of race doesn’t give much time for others to make up ground.

#1 KISSING FROGS (4-1) should be competitive today based on the pace setup projected in this one. #5 WHIMSICAL MUSE (9-5) is a deserving favorite with top overall power rating. #7 MY SWEET WIFE (9-2) has run against tougher and may be able to set the pace. #2 MIRABELL MEI (8-1) is another who has been trying tougher lately.

#7 RUFA RED KNOT (9-2) has speed figures to suggest that this one is in with a big shot. #2 HOLDING COURT (4-1) merits consideration in this spot given edges in stamina & race flow. #8 GOLDEN ISLE (8-1) should be in the right spot early to give this horse a chance to get the job done. #4 KAEKO (10-1) has to be respected based on the connections.

#6 RAISE THE RENT (7-2) is a major player based on speed figures alone. #2 DEMOCRACY (12-1) has been running against significantly better and the price make this one a great value bet. #5 CREATIVE CLOUD (3-1) should be competitive today based on the connections who should have him ready to go today. #1 DREAMING OF GERRY (8-5) has been good at today’s conditions and will be on or near the lead.

#1 LARA’S LADY (5-1) has been putting up great speed figures and based on current form could pull the upset here. #3 ARROW SHAPE (8-1) is proven as a good bet to at least hit the board under today’s distance and surface conditions. #7 ROCK ALONG (8-1) has to be respected based on the connections. #6 MIRACLE DRUG (9-2) based on the overall power rating.

#6 ABUSE OF POWER (7-2) is the top rated horse in the group and has speed figures to suggest this one is just faster than these. #1 HIGH SPEED STEF (9-2) should be in the right spot early to give this horse a chance to get the job done. #10 ZIA’S SONG (12-1) will likely have the stamina to outlast these in the final jumps of the race. #7 STRONGERTHANUKNOW (8-1) comes into the race signaling a big performance in the near future.

#7 STRAIGHT TO GO (8-1) has run against tougher and could pull the upset in a group that doesn’t exactly wake up the echoes of Secretariat or Seattle Slew. #1 RADIANT GEM (4-1) makes sense based on speed figures. #5 GOSSIPING (7-2) should be competitive based on the overall power rating which has it tops in the group. #4 VINTAGE GIRL (6-1) could get a perfect pace scenario today.

Although the slate is fairly quiet heading into Christmas, racing will heat back up on December 26th with the opening of Santa Anita. Don’t forget to check out the Betting News free handicapping tools to help you solidify all of your selections over the weekend of racing.

The 2022 Formula 1 season is only six races deep, but the race for this season’s championship alerady appears to be down to just two drivers. Last season, Red Bull driver Max Verstappen claimed his first Formula 1 World Drivers’ Championship in highly controversial circumstances, with Lewis Hamilton denied what would have been a record-breaking END_OF_DOCUMENT_TOKEN_TO_BE_REPLACED