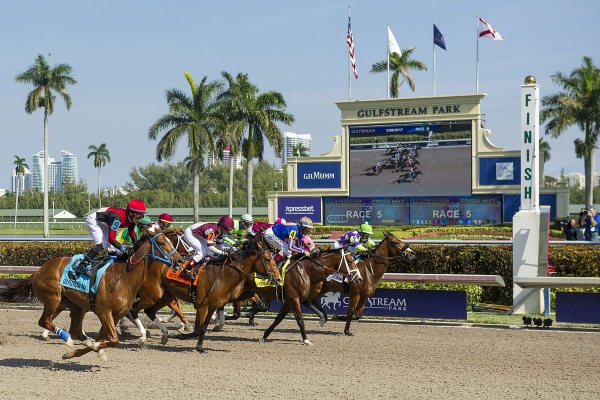 The 5th race at GulfstreamPark on June 30 is a relatively standard Stake race but the presence of a favourite with speed on the inside of this route race makes it a good bet opportunity.

WAR GIANT is likely to start fast in a prime post position but will get some heat on the outside from multiple opponents. The colt will likely go out as favourite but has never been tested much in hard pace situations…

The pace profile of the racetrack says that the favourite with speed is likely to go wire to wire but with so much speed elsewhere and an untested spirit , a come from behind surprise like NOBLEDRAMA is not impossible…

Number 1, WAR GIANT is stepping up in class after two pretty impressive wins by blowout margins at Gulfstream Park. This lightly raced horse might have some room for further improvement and considering that he posted the best speed figure last time out, an improved performance would make him hard to beat today. His pace profile is well suited for the racetrack and drawing the inside is generally favorable too. But there are other quality speed horses on his outside and it will be the first time WAR GIANT is truly tested for the lead. As the morning line odds favorite and the biggest speed figure in the field, we can expect WAR GIANT to be fancied by many and with its odds dropping he should be seen as a favourite to beat…

Number 2 GRAN KING OF KINGS did not run too poorly last time out, already in stakes company. But looking at his overall career, the horse does not strike as a contender today. His only win in 9 starts came at Gulfstream Park on a route race so there is a plus. That was his 6th race though and he broke his maiden at a relatively low level of class. GRAN KING OF KINGS knows how to come from behind so if the pace scenario leads to a collapse of the front runners, he might be able to claim a spot on the podium, but I doubt that he can earn his second gold medal against this tough field.

Number 3, SIGHTED starts today unbeaten and has won his two races while fighting a hot pace. The horse is susceptible to progress further considering that it will be only his third race but the step up in class and the step up in distance throws some doubt on the endeavor. His pedigree does not scream route-friendly so taking SIGHTED to win today is a big gamble in my opinion. He will contribute to make the pace hard for the favorite, but it’s unlikely that the pressure of SIGHTED can last all the way.

Number 4, NOBLE DRAMA is tried and tested at the stakes level and comes from repeat decent speed figures though he will probably have to show more to win today. His come from behind style would usually not be an advantage at Gulfstream Park but if we trust that the favorite is a tad weak and going to face a lot of pace pressure, we should like the chances of NOBLE DRAMA here. The jockey Saez failed with him the only time they ran together but Saez is a winning choice for trainer David Fawkes so the switch back to him might be a sign that NOBLE DRAMA is ready to go. Today he might get the pace scenario that he needs. At 4 to 1 morning lines it is a good bet but I hope that it goes up when the crowd follows the speed figures and overbets others.

Number 5 PHANTOM RO is another speed horse likely to spoil the pace for the morning line odds favorite. Coming from the outside on the Gulfstream Park Dirt Route course is not very easy and probably even less when the horse is coming back from a 10 months layoff… On the plus side, PHANTOM RO has won at Gulfstream Park and at this class level. The wins were at short sprint distances so one needs to question whether he can go the distance today. Or will he just make life difficult for a while for the other speed horses?

Number 6, POWERFUL VENEZUELA broke his maiden at first try on this track last year but was rested for almost 6 months which definitely means a serious physical impediment. The first run back in March was probably a glorified workout and POWERFUL VENEZUELA finished a close second in his last race showing a ton of improvement speed wise. So, lightly raced and with a bullet workout last week, maybe POWERFUL VENEZUELA will be the dark horse today? But bear in mind that all his races so far have been sprints and he does not come from a known route family. His come from behind style might suit him well today so if the odds go way up, why not give him a chance but it is a pretty big gamble to take at the morning line odds of 5-1…

Number 7, SILENT TIGER is yet another speed horse who ran mostly in Florida Sprints and did not find a ton of success in them (1 win in 9 tries). He did place twice at route distance and has a somewhat decent speed figure in his last outing but I don’t see much room for improvement, especially not stepping up in class and starting the farthest from the outside. The quite poor jockey is not likely to help much so that’s a pass but fans of the come from behinds horses will at least root for him to make the pace even hotter in the early stages.

The Gulfstream Park racetrack tends to favour speed horses on the inside and that’s exactly where WAR GIANT is placed.
Today, however, one can picture a pretty heated pace race unfolding and as a favorite untested in contested pace and other blemishes on paper, the savvy bettor should take a stand against WAR GIANT and the other speed horses for that matter.
I believe that the race should unfold just right for NOBLEDRAMA and possibly for POWERFULVENEZUELA but I fancy him only in the exotics