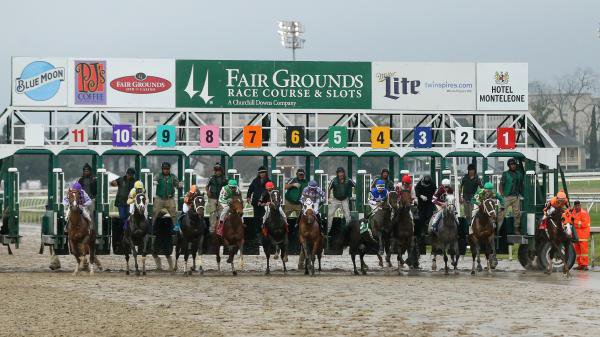 Fair Grounds kicks off a big weekend on Thursday. The weekend will be clouded by the passing of Medina Spirit & suspension of Irad Ortiz.

This week featured two big stories that rocked the horse racing world. Unfortunately neither did much to convince the broader sports audience that this is a sport you want to be a part of.

On Friday champion jockey Irad Ortiz Jr. made one of the most reckless riding decisions of 2021. He took his horse from the center of the track and aggressively took him to the rail. In the process he failed to clear the horse that was already there and forced the horse to check to the rail. This caused the horse’s jockey, an inexperienced apprentice rider, to fall off the horse.

Falls are extremely dangerous for jockeys and can even be deadly. The fact that a journeyman jockey would take this chance on an inexperienced one makes it even worse. 3 screenshots from the head on race replay can be seen below.

One complaint that many have when it comes to Irad Ortiz Jr. (and many of the NYRA jockeys for that matter) is that they have gotten away for too long with a practice called herding.

This is where a jockey will press his horse alongside another to intimidate the horse and potentially cause it to shift course and lose forward momentum. The practice becomes especially dangerous when done along the rail which can often cause situations like we saw on Friday.

While the stewards were making their decision about Friday’s races Irad was allowed to ride on Saturday where he was questioned for his winning ride in the Remsen Stakes where he tried to squeeze the runner up into the rail once again.

The stewards finally ruled that Ortiz Jr. would be suspended for 30 days. Ortiz did not appeal, but because horse racing is a fragmented industry, he spent the first day of his suspension winning races in Puerto Rico.

The suspension of Ortiz had the horse racing world talking. That is until Monday workouts at Santa Anita Park. Early in the morning buzz was circulating that Medina Spirit, Kentucky Derby 1st place finisher had a heart attack following a routine work.

The death was bad for racing but especially for Santa Anita who has worked tirelessly to put the past behind them. 2 Years ago the track was all over the mainstream media for a run of equine deaths.

The track was closed for study and maintenance. New safety protocols were implemented. The result was positive and they had significantly reduced the number of equine fatalities.

However, the high profile nature of this case has put them back in the public relations meat grinder.

The other challenge the industry faces is that the horse was trained by Bob Baffert. The positive drug test in the Derby is being used by many as proof that Baffert is drugging his horses to death. Many of these pointing to the sudden cardiac death of XY Jet who was trained by Jorge Navarro.

Navarro is currently on trial for using synthetic to circumnavigate testing procedures.

It is important to note that at this time there is no concrete evidence to suggest that Medina Spirit’s death was related to this in any way. Horses, like humans can have heart attacks even at relatively young ages.

Samples from Medina Spirit will be sent for testing and a necropsy will be performed before any speculation can be confirmed or disproved though it is likely to matter little to those who already think they know the answer.

The question now becomes what will horse racing do with Baffert. There is no direct evidence linking training practices to this death, but the public perception of allowing him to be a part of the industry certainly does not reflect well on the sport.

Despite the negativity swirling around the racing world. Thursday kicks off a big week at the Fair Grounds which includes 2 stakes Friday and 7 Louisiana bred stakes on Saturday.

#3 JUANANDORA (5-2) is a major player in today's race edging the field in several key handicapping factors including speed & form. #5 HANGING LAKE (7-2) is another with a great shot to find the winner’s circle. #2 MIDNIGHT TRIP (6-1) should be in the right spot early to give this horse a chance to get the job done. #6 IBEGTODIFFER (9-2) should be competitive based on the overall power rating which has it tops in the group.

#5 GOINGTOAGOGO (3-1) is in with a great chance based on the connections & overall power rating. #7 ARTISTIC JEWLER (5-1) is a major player based on recent speed figures. #6 NOFANSINTHESTANDS (9-2) is proven as a good bet to at least hit the board under today's distance and surface conditions. #10 QUEEN'S MISSION (20-1) seems like a steal given the class and pace numbers at a nice price.

#3 MUSADA (5-2) is in with a great chance based on the horse's connections & recent form. #2 CRYPTORITHM (3-1) should be competitive based on the overall power rating which has it tops in the group. #5 AMBASSADOR HOUSE (6-1) merits consideration in this spot given edges in stamina & record at the distance. #6 C F JOHNATHAN (3-1) is a major player based on speed figures.

#4 CITIZEN WEST (5-2) has a great shot in the race given the advantages in speed & class. #5 CYPRIANO (3-1) looks like the 2nd likeliest winner. #3 FIFTYFIVE STRONG (5-1) is worth a look here given edges in connections & record at the distance. #2 CHIEF CHEETAH (4-1) makes sense but may not offer the requisite value.

#2 MIDNIGHT BLUE NOTE (15-1) should be in the right spot early to give this horse a chance to get the job done. This could be a big separator in the picks. #1 COMMANDER KHAI (7-2) looks to have to have kept the best company in the previous starts. #10 CHIMNEY ROCK (6-1) should be competitive today based on the horse's advantages in speed & form. #6 BIARRITZ (9-2) wouldn’t be a surprise, but lacks value at the current price.

#9 NICE STAR (5-1) is in with a major shot holding advantages in speed & class. #1 LETSTAKEITOUTSIDE (9-2) should be able to compete in this group. #5 CHEROKEE TAKEOVER (8-1) is an interesting longshot in a relatively weak field. #7 LS'SHOE'S IMAGE (15-1) should be in the right spot early to give this horse a chance to get the job done.

The 2022 Formula 1 season is only six races deep, but the race for this season’s championship alerady appears to be down to just two drivers. Last season, Red Bull driver Max Verstappen claimed his first Formula 1 World Drivers’ Championship in highly controversial circumstances, with Lewis Hamilton denied what would have been a record-breaking END_OF_DOCUMENT_TOKEN_TO_BE_REPLACED